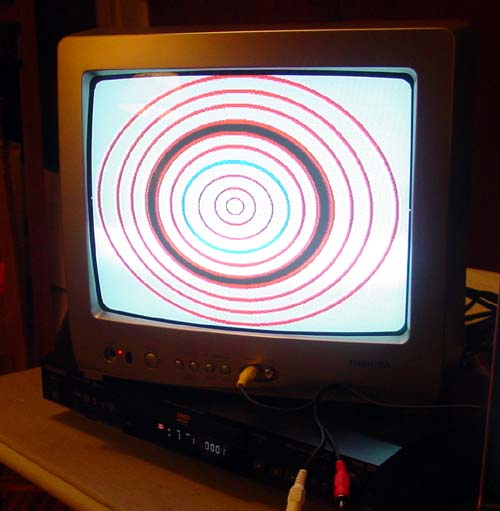 
"I like the ones on the Internet better."
"That's not the point--the shots on the bottom are just documentation of pieces that can never be experienced on the web, just as net art always flops in the gallery setting."

But seriously, I'm pretty happy with the DVDs I just burned (these flared-out shots notwithstanding), inspired by Paul Slocum's work for the Dallas show. Picked up that Toshiba TV on clearance for 74 bucks. The LED Grid is an HTML piece--a found GIF remixed to blink at different rates. I used a capture program to convert it to a video file, then burned the file to DVD, which is then set for chapter repeat in the player. For the OptiDisc piece, the same capture program played the original GIF 12 times to make the video. I like Paul's idea of burning several animations to one DVD and then having several TVs going at once. Now I know how to do it and don't have to bug my friends so much.