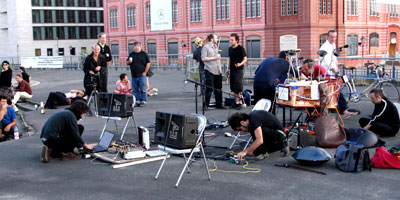 Schlossplatz was once the home of the Berlin City Palace. In 1950 the palace, a symbol of Prussian pride and wealth was demolished by the GDR and erected in its place was the Palast der Republik. Due to the combination of the reunification of Berlin and the use of asbestos, the Palace of the Republic is being deconstructed and soon the old palace, Stadtschloss will be rebuilt.

Schlossplatz has historically been a highly contested site. On July 14th it became a site of public performance, sound broadcast and celebration.

Copa Sonar was organized by Marco Barotti, Emanuele Guidi and myself in collaboration with sonambiente, and tesla. Five experimental sound groups volunteered to overtake the desolate public plaza off of the touristic street Unter din Linden. Performances by ap/xxxxx, B Component, the rottt (the return of the thinking thing) and lekronk, OLYVETTY, saal-c were broadcast from the site via miniFM and visitors were offered free wine and beer. The audience was a diverse mix of sound art connoisseurs, curious tourists, and skaters.

The recordings from the event are now available as mp3s and high quality aifs to download - Copa Sonar. Enjoy the data tranformed into noise by ap/xxxxx; the relaxing sound of a Swiss precussion instrument electronically modulated by B Component; electronic and computer experimentation by the return of the thinking thing; Olyvetty's trans-like performance or the more melodic compositions of saal-c.