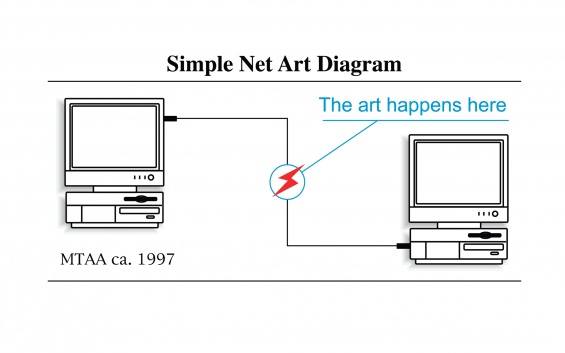 On October 27, Rhizome will launch a major new initiative, Net Art Anthology, with a presentation and panel discussion bringing together a group of artists who championed distinct and often conflicting approaches to net art practice in the mid to late 1990s.

Funded by a grant from the Carl & Marilynn Thoma Art Foundation, Net Art Anthology is Rhizome’s ambitious project to retell the history of a field of artistic practice in which even the most influential works often fade into obscurity as a result of technological obsolescence. It will restage a diverse selection of one hundred works from net art history, one per week, over the course of the next two years. The first phase of the Anthology will focus on works created before 1999, and launches on the day of the event with A Cyberfeminist Manifesto for the 21st Century (1991) by VNS Matrix.

The event will feature a presentation about Net Art Anthology by Michael Connor, Rhizome’s Artistic Director; Aria Dean, Assistant Curator; and Dragan Espenschied, Digital Preservation Director. Following this, a panel discussion will bring together artists who articulated early and divergent artistic approaches to the internet, ranging from performance to activism to narrative to folkloric cultures. Panelists include Olia Lialina (net artist and Geocities researcher/archivist), Martha Wilson (artist and founder of Franklin Furnace), Ricardo Dominguez (artist and founder of Electronic Disturbance Theater), and Mark Tribe (artist and founder of Rhizome). Each artist will discuss their early online work as artists, curators, and organizers, reflecting on commonalities and contradictions in the field.