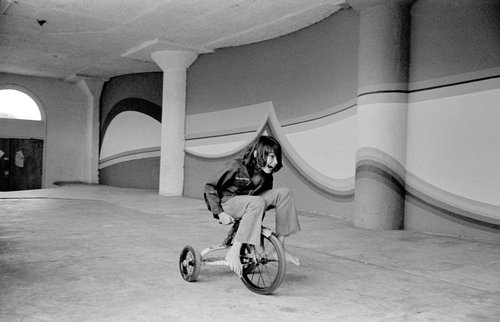 RSVP for streaming details and reminder

Artist Lynn Adler will join Office Hours host Briana Griffin and Rhizome co-director Michael Connor for an informal screening and conversation this Thursday, Nov 3, at 2pm EST. Adler is a founding member of Optic Nerve, and will speak about the collective’s video works, sharing clips from Project One (1972) and Fifty Wonderful Years (1973).

This conversation is organized in connection with Rhizome’s research on the work of Kit Galloway and Sherrie Rabinowitz. Beginning with their meeting in 1975, the duo developed a decades-long practice that prototyped and model “new ways of being in the world” that would be made possible by virtual space and telecollaborative networks. Prior to beginning their singular and essential collaboration, both artists participated in alternative video collectives—Galloway in the Amsterdam-based Video Heads, an Rabinowitz in Optic Nerve. With the support of the Carl & Marilynn Thoma Foundation, Rhizome is working to publish an unfinished manuscript by Gene Youngblood about the duo’s life and work.

Initially a photographers’ collective, Optic Nerve operated out of a basement darkroom at Project One, a “technological commune” in San Francisco’s Mission District in the early 1970s. A five-story, 84,000 square-foot former candy factory, Project One was living and working space for more than 200 artists, designers, architects, alternative media workers, and political activists–and their children.

In 1972, Optic Nerve – including Adler, Jules Backus, Bill Bradbury, Jim Mayer, and Sherrie Rabinowitz –  expanded to include new members, including Sherrie Rabinowitz, and undertook their first video project. That project arose in 1972, when a young intern at KQED, the San Francisco PBS affiliate, began work on a documentary about the commune, storing his PortaPak in Optic Nerve’s space when it was not in use. When he abandoned the project partway through, Optic Nerve took over. This marked the beginning of their long engagement with alternative documentary. In 1980, Adler and several other members of the group created a new partnership, Ideas in Motion, to continue making documentary work.

The Project One documentary is characteristic of Optic Nerve’s approach – unlike the thickly satirical tone of attention-grabbing contemporaries TVTV, their editorial point-of-view is established almost entirely through observation. In one scene, they capture a meeting in which live-in tenants of the warehouse make a bad faith attempt to impose a steep rent hike on Optic Nerve’s workspace, and yet they still remained calmly circumspect.

This style carried through to Fifty Wonderful Years, which tackled the topic of the Miss California Beauty Pageant, which took place in the Bay Area against the backdrop of a growing women’s movement. Here again, they resisted the temptation to make easy criticisms, again delving into their subject matter and the people involved.