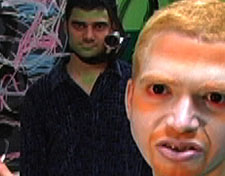 Trecartin's first feature-length video I-Be AREA extends the artist's singular process and style into new territory. Fast-paced and dense with drama, I-Be AREA relates the intertwined stories of an exuberant ensemble, played by Trecartin and dozens of others, as they cope with themes such as cloning, adoption, self-mediation, lifestyle options, and virtual identities. The film centers around Jaime's Area (played by Lizzie Fitch), a space which functions, in the artist's words, as a kind of "bedroom/classroom/drama department/blog space/Internet-community site where the characters malfunction in the face of everything being everything and come to act on their own creative potential."

The artist will discuss his practice with Lauren Cornell, Director of Rhizome, on December 14. See that date for details.

Part of the New Silent Series