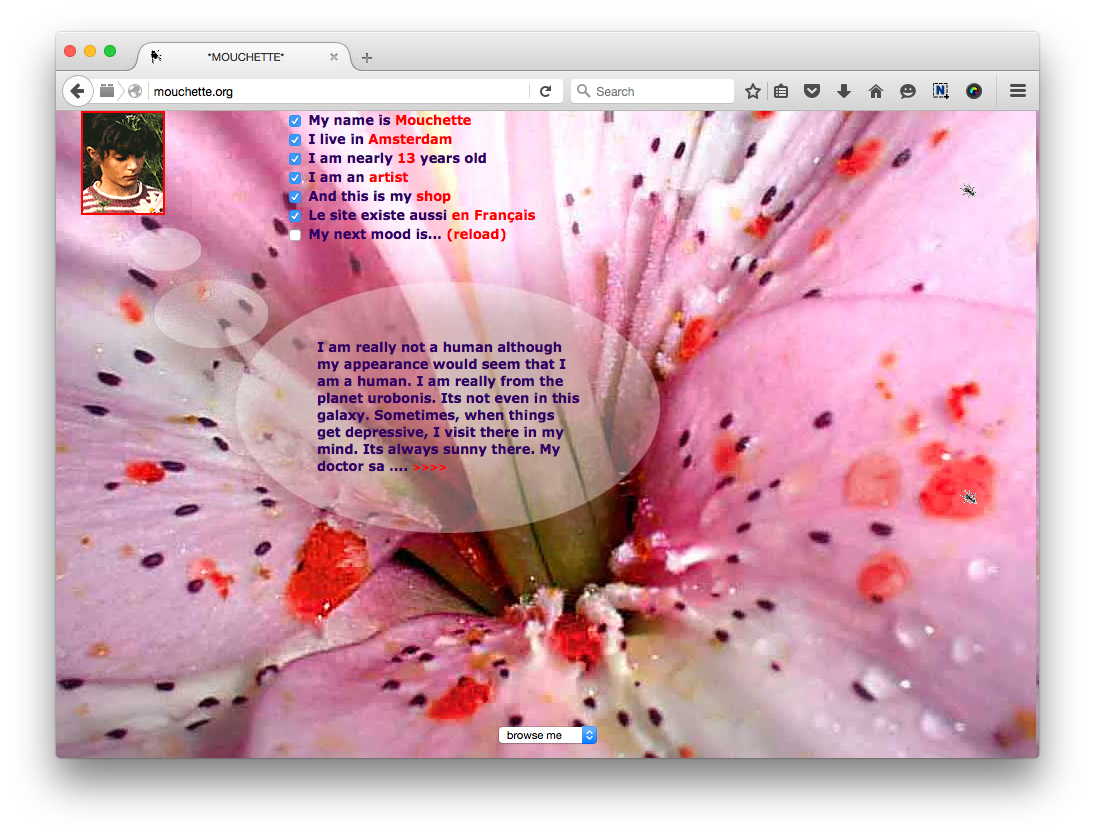 “My name is Mouchette. I live in Amsterdam. I am nearly 13 years old.”

This event will feature presentations of three works of digital art and literature that allow users to engage and identify with on-screen characters: Mouchette.org (1996–ongoing) by Martine Neddam; The Pink of Stealth (2004) by Mendi and Keith Obadike; andPSYCHO NYMPH EXILE (2016) by Porpentine Charity Heartscape, Neotenomie, and Sloane. A panel discussion with the artists will follow the presentations.

The works shown during this event all make use of hypertext—text that is organized in a nonlinear manner so that it can be read in any order. This form was an important inspiration for Tim Berners-Lee’s 1989 proposal of the “WorldWideWeb,” which he described as a “HyperText Project.” Today, most online user experiences are organized around vertical scrolling processes or other sequential browsing formats, with hypertext playing a less central role. However, artists continue to find that the nonlinear structure of hypertext makes for productively fluid relationships among artists, characters, and audiences. The works presented during this event, created between the 1990s and the present, make use of such relationships to build empathy, perform identity, and model alternate social possibilities.

“Hypertext Characters” is organized alongside the premiere of PSYCHO NYMPH EXILEby Porpentine Charity Heartscape, Neotenomie, and Sloane, copresented by Rhizome and the New Museum as part of First Look: New Art Online.

This program is supported as part of the Dutch Culture USA program by the Consulate General of the Netherlands in New York.

Major support for First Look is provided by the Neeson / Edlis Artist Commissions Fund. Additional support is provided by the New York State Council on the Arts, the Toby Devan Lewis Emerging Artists Exhibitions Fund, and the Andy Warhol Foundation for the Visual Arts.