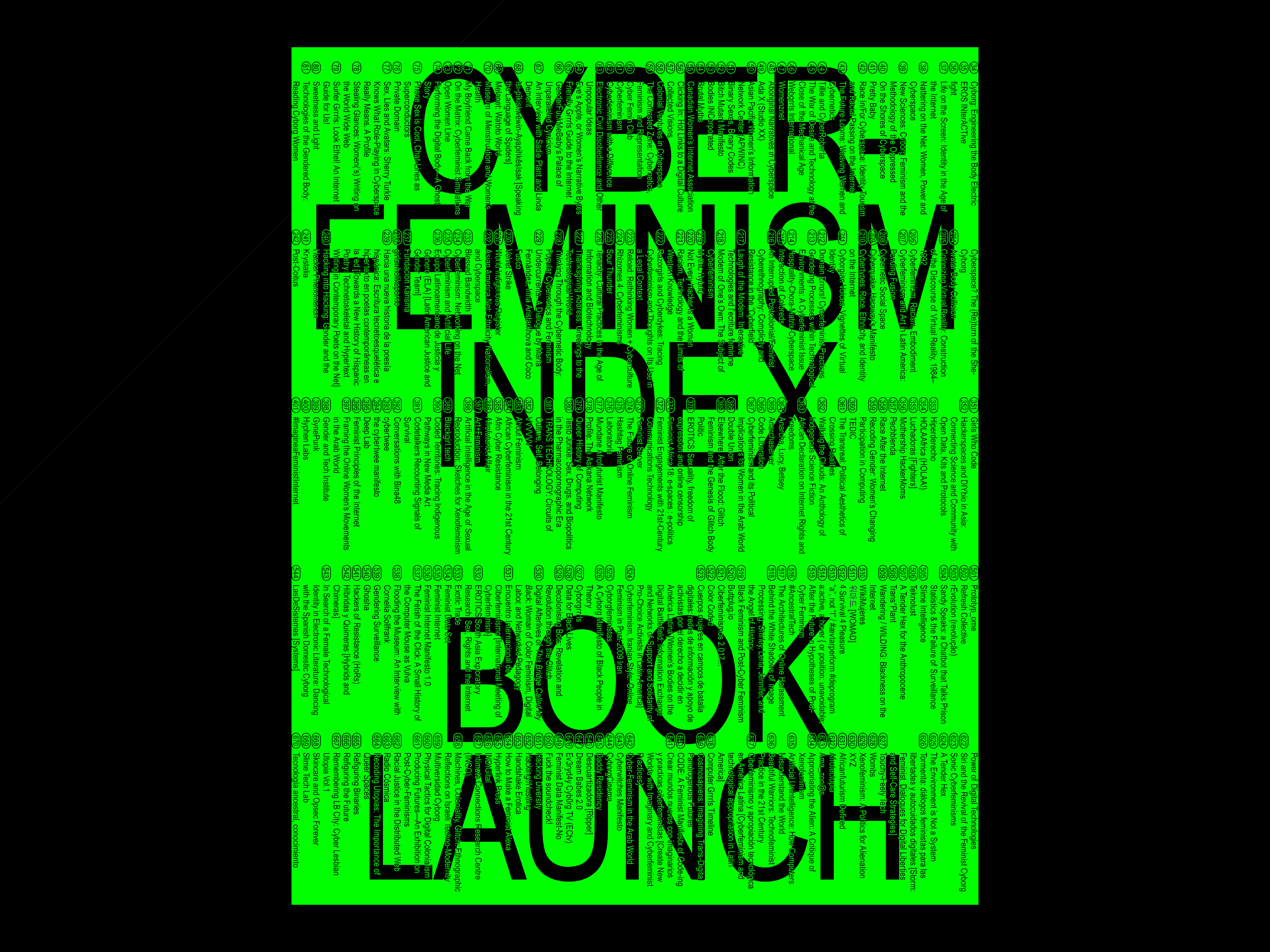 Tickets to the live event have sold out. The event will be livestreamed, RSVP for a reminder and instructions!

Cyberfeminism Index is published by Inventory Press and is available for preorder.

On November 14, 7 pm, Rhizome will host the book launch for designer and editor Mindy Seu’s Cyberfeminism Index at the New Museum. The event will feature a performative reading led by Seu followed by a conversation with artist contributors Prema Murthy, Tega Brain, and E. Jane, with McKenzie Wark as respondent.

Launched in 2020 with support from the Rhizome Commissions program, Cyberfeminism Index began as a website featuring projects in a wide range of modes and media relating expansively to the productively complicated portmanteau from which it drew its name. The website was conceptualized and facilitated by Seu, who also “gathered” the entries, and developed by Angeline Meitzler, with frontend support from Janine Rosen and PDF support from Charles Broskoski. Welcoming submissions from the public, the always-incomplete project featured links, descriptions, and images that represented a long history of experimentation with and critical thought about “how humans might reconstruct themselves by way of technology.”

Working with publishers Inventory Press and designer Laura Coombs, Seu has now translated this project to print with a selection of more than 700 short entries, including excerpts from academic articles and scholarly texts; descriptions of hackerspaces, digital rights activist groups, and bio-hacktivism; and depictions of feminist net art and new media art. Advance copies of the book will be on sale at the event.

Mindy Seu is a designer and technologist based in New York City. Her expanded practice involves archival projects, techno-critical writing, performative lectures, design commissions, sharing—typically in the form of lists and spreadsheets—and close collaborations. Her latest writing surveys historical precursors of the metaverse and reveals the materiality of the internet. Mindy’s ongoing Cyberfeminism Index, which gathers three decades of online activism and net art, was commissioned by Rhizome and presented at the New Museum in its online form, and its print form is a recipient of a Graham Foundation Grant. She has lectured internationally at cultural institutions (Barbican Centre, New Museum), academic institutions (Columbia University, Central Saint Martins), and mainstream platforms (Pornhub, SSENSE, Google), among many others, and has been a resident at MacDowell, Sitterwerk Foundation, Pioneer Works, and Internet Archive. Mindy holds an M.Des. from Harvard’s Graduate School of Design and a B.A. in Design Media Arts from the University of California, Los Angeles. She is currently Assistant Professor at Rutgers Mason Gross School of the Arts and Critic at Yale School of Art.

Tega Brain is an Australian-born artist and environmental engineer whose work examines issues of ecology, data systems and infrastructure. She has created wireless networks that respond to natural phenomena, systems for obfuscating fitness data, and an online smell-based dating service. Her work has been shown widely including in the Vienna Biennale for Change and the Guangzhou Triennial. Her first book, Code as Creative Medium, is co authored with Golan Levin and published with MIT Press.

Prema Murthy is an American artist based in New York. Her work includes painting, video, digital media and installation. Employing line, form, geometry and algorithmic processes, she examines the intersection of embodiment and abstraction. She received a BA in Art History and Women’s Studies from the University of Texas, Austin and an MFA from Goldsmith's College, London.

McKenzie Wark is the author of A Hacker Manifesto (Harvard) Philosophy for Spiders: on the low theory of Kathy Acker (Duke), and Reverse Cowgirl (Semiotexte), among other things. She teaches at Eugene Lang College in New York City.