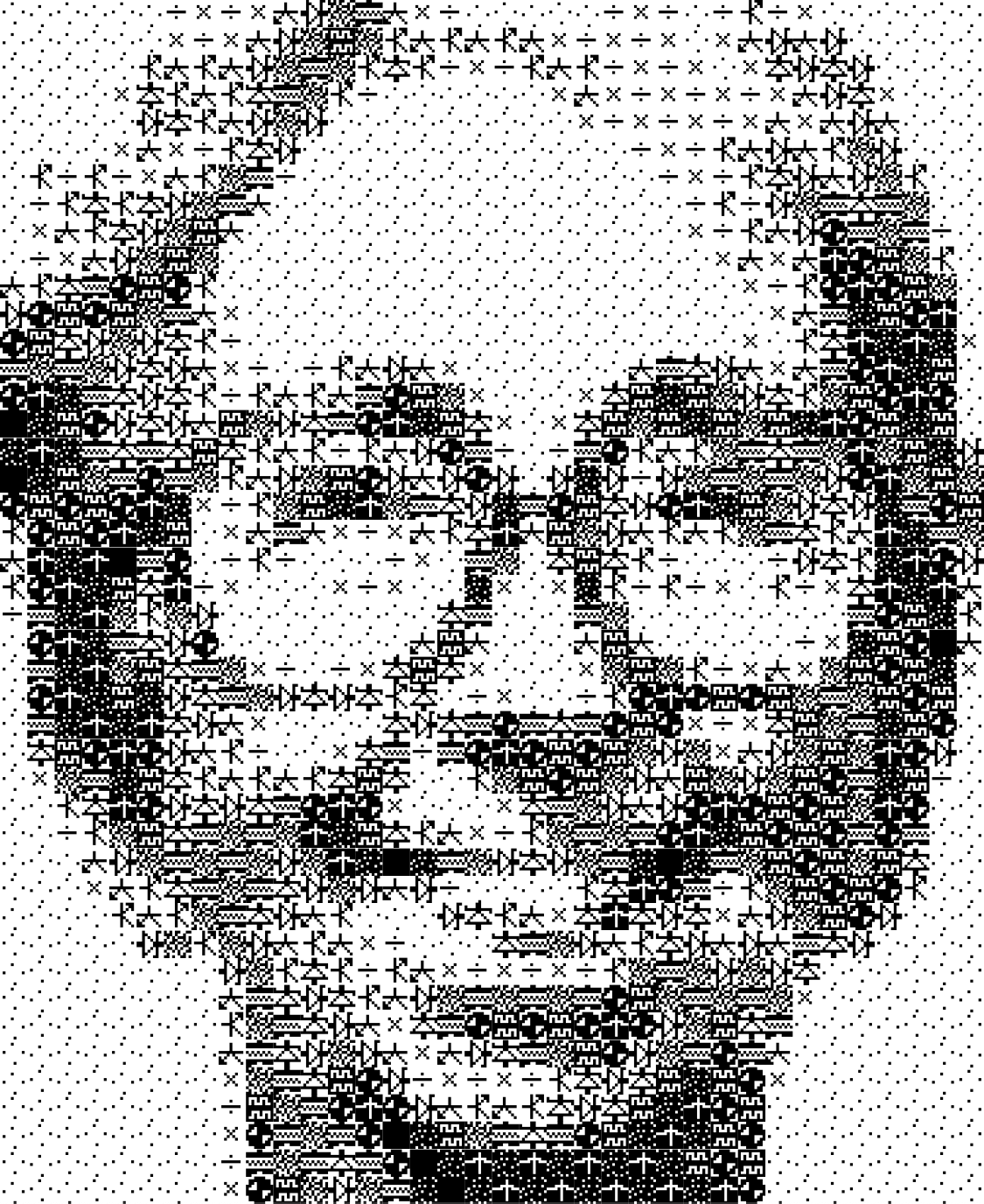 As part of Rhizome’s 2022 benefit sponsored by Zora, we are pleased to present Studies in Perception IV: Julie Martin (2022), a 1/1 NFT edition. This work by artist and engineer Ken Knowlton, made with the support of media historian Jim Boulton, was created using a reconstruction of the algorithm that generated one of computer art history’s iconic works, Studies in Perception I (1966) by Knowlton and Leon Harman, also known as Computer Nude. The work, an on-chain SVG file that uses a custom contract by developer Iain Nash, is available for bidding on Zora. You can also read a conversation about this project with Knowlton and Boulton on Zora Zine.

Studies in Perception I weaves together important threads in art and technology, and intersects with Julie Martin’s own story as well. The work was exhibited during a press conference at Robert Rauschenberg’s loft building in 1967 to publicize the work of Experiments in Art & Technology, a non-profit organization founded one year earlier by artists Robert Rauschenberg and Robert Whitman and engineers Billy Klüver and Fred Waldhauer.

An article about the event that ran in The New York Times on Wednesday, October 11, 1967 paid considerable attention to the work, a nude composed of clusters of symbols of the kind used in creating circuit diagrams. Created by engineers Leon Harmon and Ken Knowlton at Bell Labs on a $2 million computer, Studies in Perception I or Computer Nude is a computer-generated image derived from a photograph of the choreographer Deborah Hay. The photograph was scanned and broken down into picture elements, each of which was assigned a brightness value, rendering the image as a grid of gray pixels. Telephony symbols of corresponding visual density were then assigned to each square. 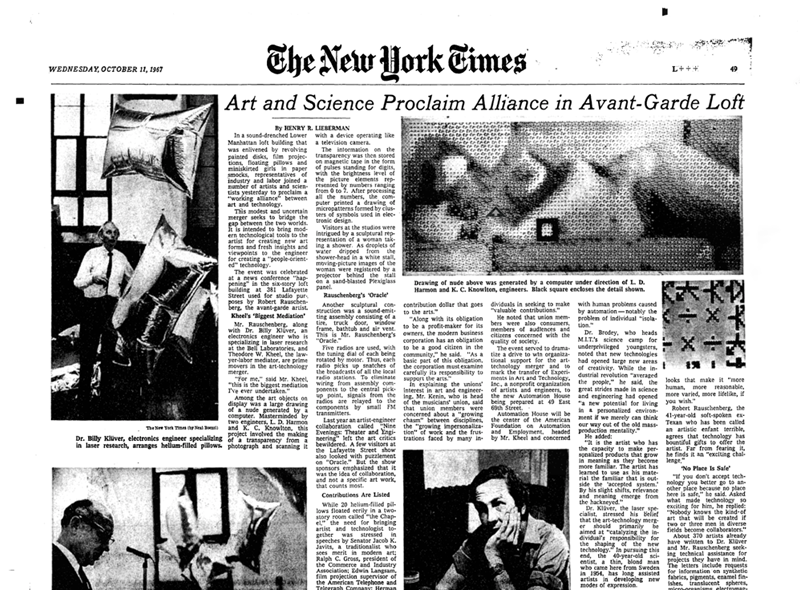 The work was an effort to explore the threshold at which an image, rendered computationally, might disintegrate into abstraction, but it registers on multiple levels. With the image of the reclining nude, the work shifted an art historical motif into the age of computation. It represented, as Rauschenberg noted in the article, “an exciting challenge” and “the kind of art that will be created if two or three men [sic] in diverse fields become collaborators.” The work also seems to evoke the idea of the body moving into an informatic realm, heralding a new relationship between human and technology.

Julie Martin was also present at this E.A.T. event. She had worked on the now-legendary 9 Evenings: Theatre & Engineering performances organized by Rauschenberg and Klüver the prior year. She recalls, “I was excited about the possibility of not just making art with technology, but effecting change, the artist as an individual being able to effect change, and I was hooked.” Following the event, she joined the staff of the organization—editing its newsletter, producing artists’ projects, and working closely with Billy Klüver himself (the two would marry in 1985). Today, she serves as Director of E.A.T. and steward of its important legacy.

The creation of this NFT portrait draws on research that Jim Boulton began while working on the exhibition “Digital Revolution,” which opened at the Barbican in 2013. Noting the relative dearth of original prints and working materials for Studies in Perception I, he reached out to Knowlton about a possible reconstruction. This would take several years to complete, during which time Boulton corresponded extensively with Knowlton while mapping and analyzing each symbol used in the image. A reconstruction was unveiled in 2016, for the work’s fiftieth anniversary, to Knowlton’s apparent amazement and delight. 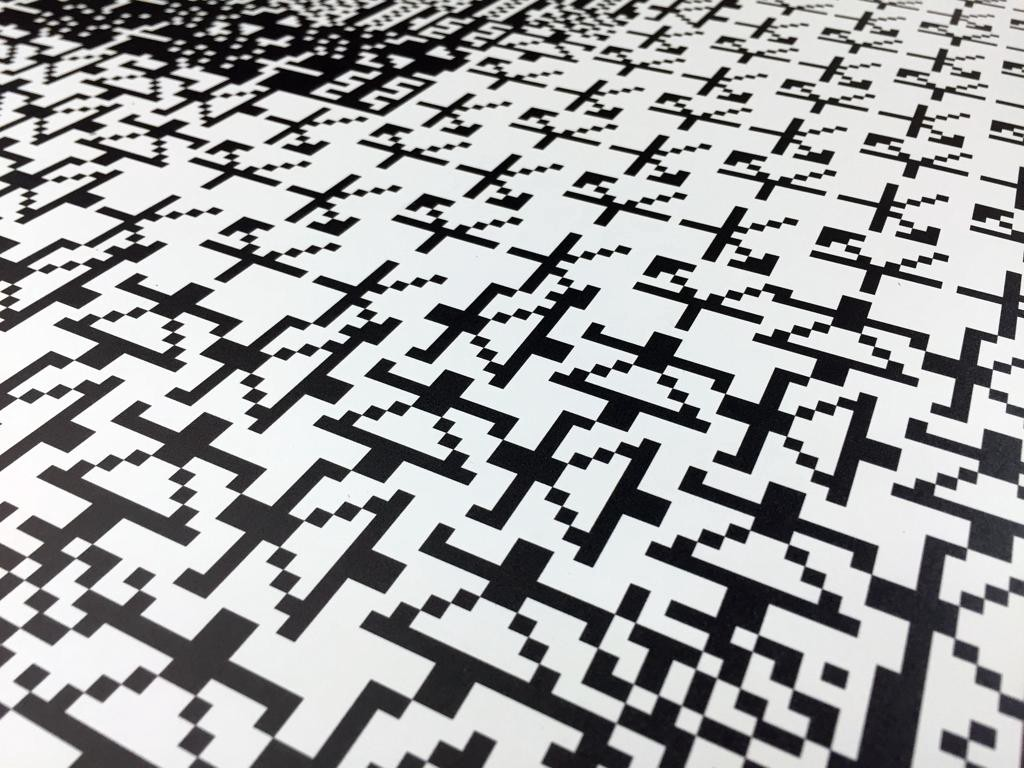 When Jim approached Rhizome about a possible collaboration this year, not knowing that we had decided to honor Julie Martin at our annual benefit, we began a conversation about this project. Along the way, Julie shared additional information about the making of Computer Nude. According to Klüver, Max Mathews at Bell Labs at Murray Hill asked him to find a nude model for the computer imaging project Leon Harmon and Ken Knowlton were undertaking. Klüver, who knew that Deborah Hay posed for artists, asked her to participate. She agreed, and Max Mathews took the photo that was used in the project. A copy of that photograph was in the E.A.T. archives, and was used for Boulton’s Studies in Perception I.

Using this image and his in-depth analysis, Jim enlisted the help of Philip Lewis, Professor of Remote Sensing at University College London, to further reverse engineer the algorithm used to develop the original image. 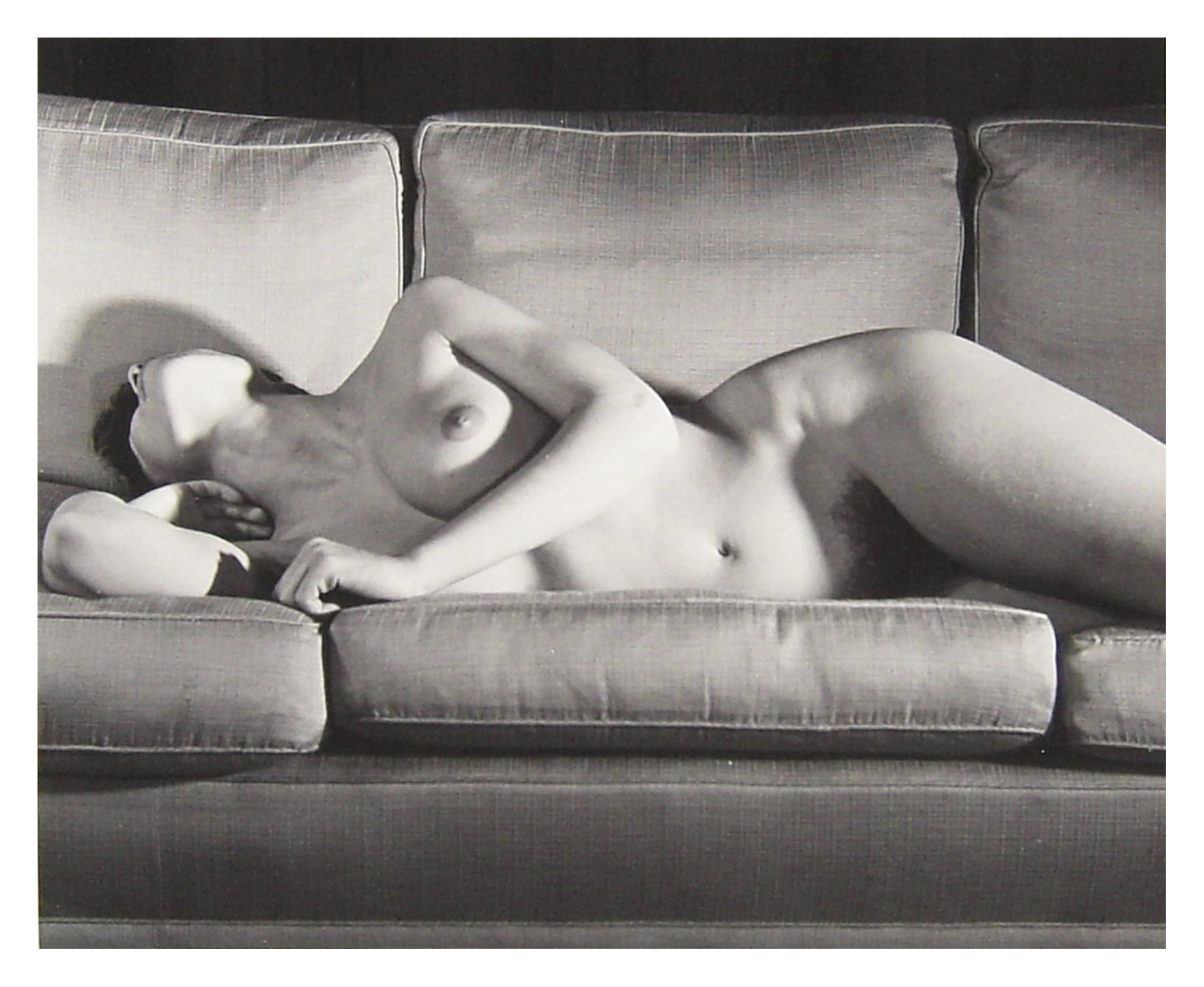 Photograph of Deborah Hay by Max Mathews used as the basis for Computer Nude (Studies in Perception I) (1966).

Knowlton and Harmon reduced the original photograph to a mosaic grid of 10x10 squares and 8 shades of gray. The greyscale values of each square were then mapped to one of 15 symbols. The challenge was to establish how the image was degraded to eight grays. We quickly ruled out a straightforward equalization process, so we employed a merit function to test every option until we had the closest match. The results appeared to be close to a Gaussian distribution, with narrow bands for white and black but broader bands for mid-range grays. However, it appears some corruption had occurred during the scanning process. For example, imperfect scaling and light creeping in on the left-hand edge precluded an exact match.

In working with Knowlton on the portrait of Julie Martin, Boulton began with a rough approximation of the original algorithm, moving gradually towards a more exact version. One might have expected that trade-offs would have to be made between aesthetics and historical accuracy, but it proved to be the case that with each refinement, the portrait seemed to become more aesthetically appealing as well. When the final version was generated, it was translated to code on the Ethereum blockchain by Zora developer Iain Nash. 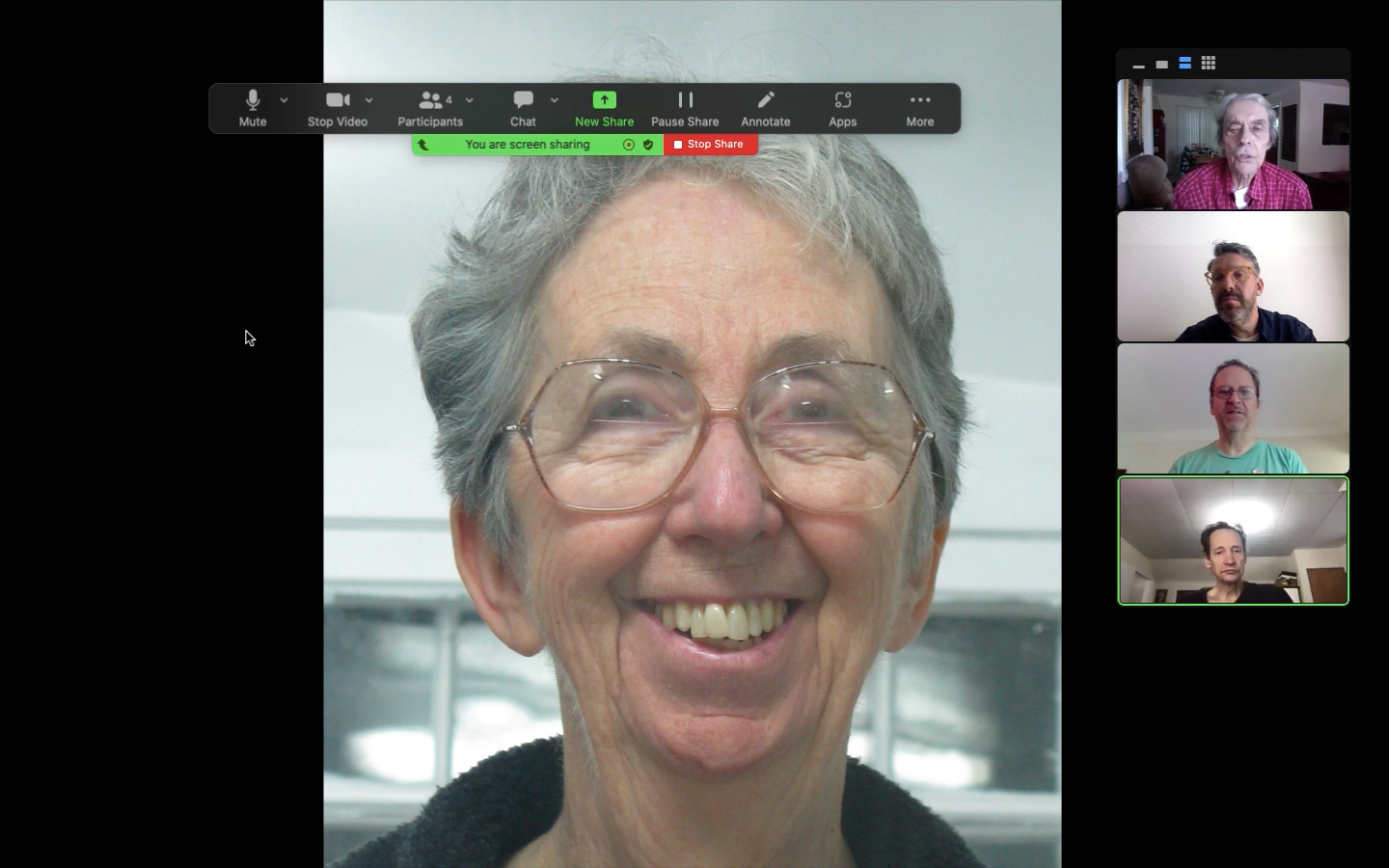 The subject of this current NFT project continues the collaboration between art and technology that was present in the first Studies in Perception. Deborah Hay, who had participated in 9 Evenings, the massive performance series that led to the founding of E.A.T., is a leading contemporary choreographer based in Austin, Texas, and performs world-wide.

And just as the subject of the first Studies in Perception artwork was important, so too is this one. Perhaps Hay herself put it best, in a recent email to Jim:

Julie was way ahead of her time in the smartest, most decent manner. She quietly broke down barriers that few knew existed within the worlds she traversed and loved. She is rare and beautiful and always has been.

In connection with Studies in Perception IV: Julie Martin, Zora has published an interview between Jim Boulton and Ken Knowlton. Proceeds from the sale of Julie’s portrait will go to support Rhizome and Ken Knowlton.