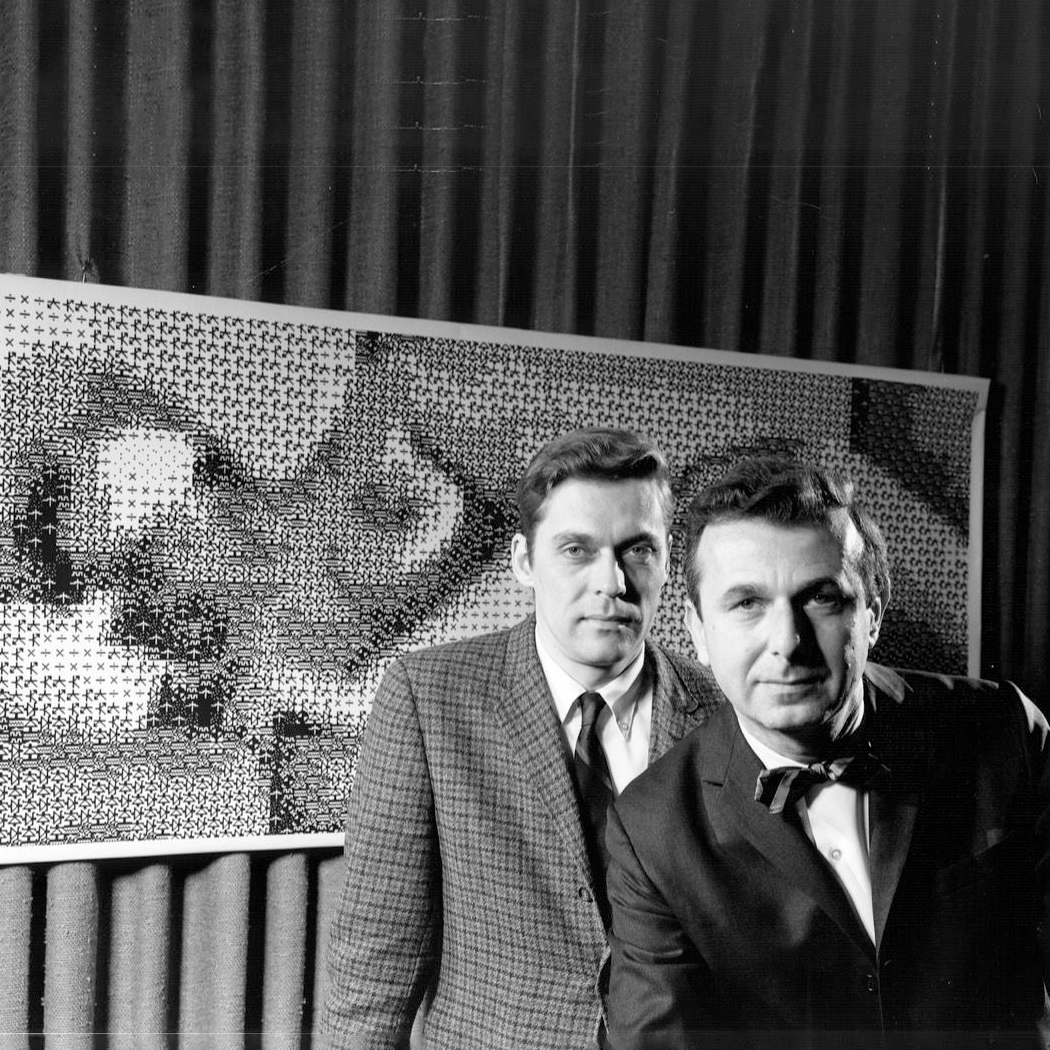 Ken Knowlton, left, and his Bell Labs colleague Leon Harmon. Behind them is the computer-generated artwork they created in the mid-1960s titled Computer Nude (Studies in Perception I).

We are saddened to learn that Ken Knowlton passed away recently, just weeks after completing an artwork with Jim Boulton for Rhizome’s 2022 Benefit. We extend our deepest condolences to his friends and family.

Knowlton and his work were memorialized over the weekend in an obituary in the New York Times, which offers a sense of his wide-ranging work as an artist and engineer, and his lasting impact on computer arts. At Rhizome, we take particular note of his reflections on artist-technologist collaboration. He had a special perspective on this topic, as an artist who also collaborated with artists while working as an Engineer at Bell Labs. His reflections have informed our approach to our signature platform for art-tech collaboration, 7x7, and are essential reading for anyone in this interdisciplinary field.

Early in his career, Knowlton penned an impassioned and oft-quoted missive on the importance of art-technology collaboration:

I expect art to come from artists or artists working closely with programmers—I do not expect much art to come from programmers alone, solely by virtue of their clever gimmicks for doing cute things. What this means in practical terms, then, is that we need to develop a great deal of collaboration between artists and programmers in order to develop meaningful, understandable, and useful sets of tools and ways of using them.1

But in later years, Knowlton took a more measured view of collaborative practice. His 2001 article “On the Frustrations of Collaborating with Artists” has a ring of hard-earned, homespun wisdom that rings true, even today, in an entirely different technological epoch.

What happens, of course, is that such pairs experiment, and they make new, dazzling, noisy, outlandish, or obnoxious things, which is not difficult with modern hardware and software. I'm a steamfitter and you're a musician? Good, I'll make and drive a road-running calliope like no other, and you play it as I drive us down the nave during the final movement of Bach's St. Matthew Passion. We'll be as noticed as cannons in the 1812 Overture — we, not Bach, will capture the eyeballs and ears! But sooner or later I learn something about music, or you become less of an in-your-face eccentric, and we lose interest in both vehicle and partnership. Perhaps we both learn that the best works of art tell stories and provoke questions, not about technology by which they were made, but about the way we think and feel about life. Perhaps, a hundred years from now — if there are still computers, and people with time and spirit for merriment — there may be a Spike Jones or a P.D.Q. Bach of computer art: technological art spoofing its own methods. But that's a long shot, in all respects.

Anyway, good things do happen in and from these organizations. The artists begin to learn about computers and other technology, and in the best cases they become their own programmers, getting the whole creative process into one head, with just one coherent set of cultural values and personal attitudes driving it. This is not a super-high expectation (architects and product designers are good role models here). It simply means that the artist becomes more logical, organized, and aware of engineering details. The payoff is a mastery of the tools and the ability personally to build and modify tools, project by project.

For the high-tech folk, the payoff is learning to be freer and more expressive. In the best cases they become more complete humans, in part from understanding that all behavior comes not from logic but, at the bottommost level, from intrinsically indefensible emotions, values and drives. Some ultimately become "artists," though the need for such classification fades.

During a collaboration, however, the going can become quite rough: the unspoken motivations and uncertain goals so easily lead to a what-are-we-doing? and who's-driving? clash (spoken or not). Eventually there is likely to come a realization that the collaborators really do have a profound disagreement about motivation, purpose, and goal.

An art-technology collaboration, presumably of peers, should be thought of as an early stage—a training period. The things that participants learn to do can be exhilarating, puzzling, enjoyable, and good background for future work.

This last phrase is perhaps the most apt summation of Knowlton’s practice. (He even spent his later years making puzzles, in collaboration with magician Mark Setteducati.) The question that remains is what future work Knowlton’s rich lifelong practice in art and technology may now set the stage for; the answer is up to us.