Documentation of the Do Not Research Book Launch
By Rhizome 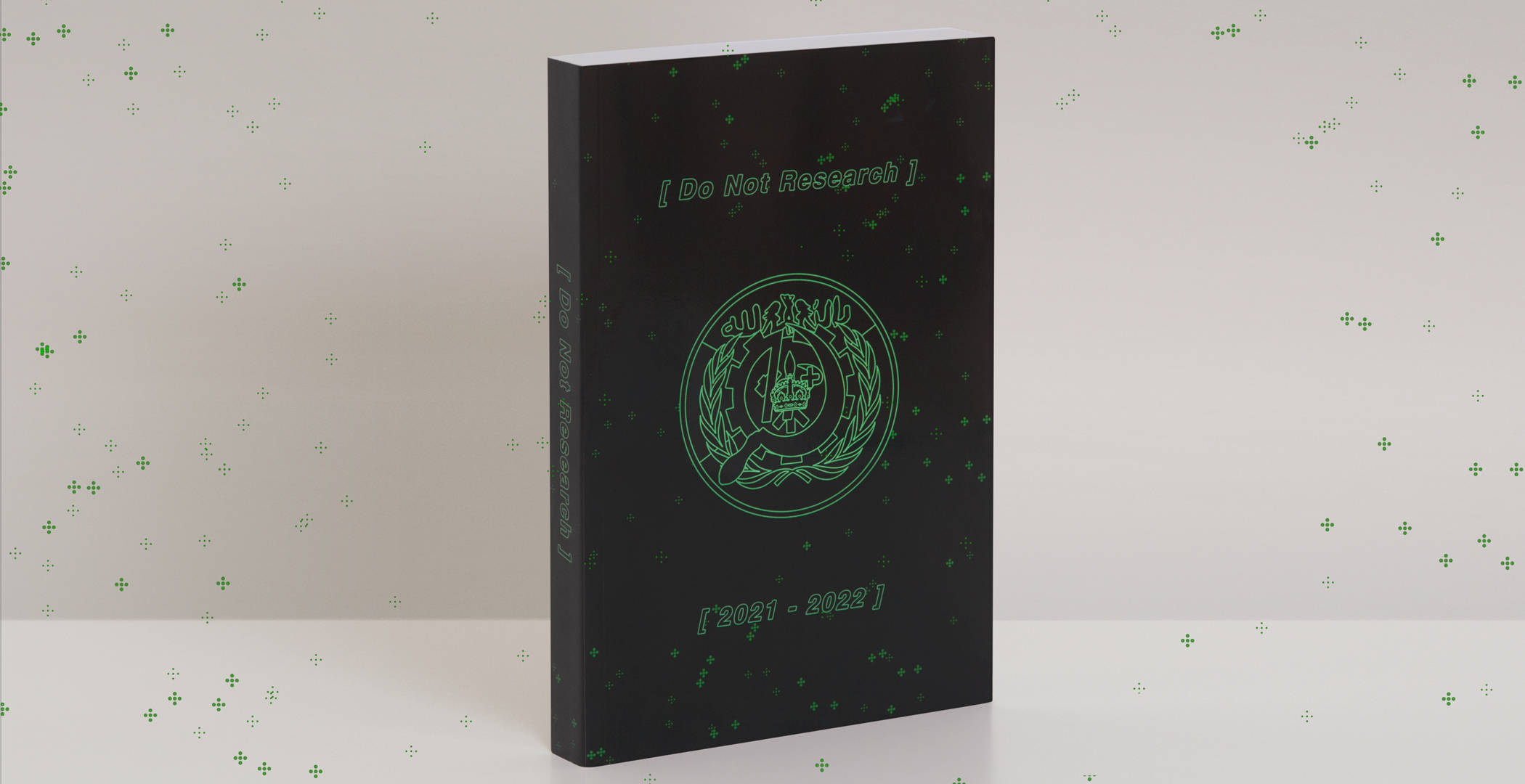 If you missed the book launch for Do Not Research on June 6, 2022 the online community and platform founded by artist Josh Citarella in 2020, edited audio is now available as the latest episode of the Do Not Research podcast.

Do Not Research grew out of Citarella’s long-term research on Gen Z political formations and the internet, which Rhizome supported as part of the Info Wars research season in 2018–2019. Citarella’s project developed to feature a highly active blog for writing, visual art, internet culture, research and more, launched in 2020.

The book launch took place on a warm, early summer evening, with contributors and supporters gathering in the New Museum’s Sky Room, where Citarella was joined by Lauren Boyle of DIS to reflect on what it means for artists to create institutions. Their conversation explored DIS’s own evolution from a magazine to streaming platform, and everything in between. DIS has long been preoccupied with prototyping ways of living and making meaning under the conditions of networked capitalism, and the Do Not Research participants also followed this line of inquiry. They read selections from a project called “Over-Hyphenated Platform Capitalism Futures,” which were speculative scenarios based on themes from Nick Srnicek’s Platform Capitalism.

These contributions were adroitly framed by two statements by Do Not Research editors Margo Bergamini and Abbey Pusz, which offered a resounding critique of the art world and its existing institutions, while making the argument for the necessity of a “parainstitution” like Do Not Research. Their remarks are reproduced below.

I feel a bit young to be speaking on behalf of a project deserving any critical reflection but, frankly, right now I also feel too old to claim to have any influence on online political discourse. The landscape has changed in recent years, but for as long as the internet has had any effect on the culture war, young people, mid-teens and younger, have constituted both the avant-garde and the rank and file.

For most of my life I belonged to the latter group, 15 years old and watching gamergate grow around me as I laughed at what someone said about someone else with blue hair and pronouns. Just years later I was on obscure leftist boards, watching the online culture wars get meta as anonymous anarchists and communists debated posting tactics.

Part of the DNR project is the recognition that, as artists in the 21st century, we are also content producers. The ubiquity of social media platforms has, of course, made influencers of us all, but it is our hope that the artists—and other similarly critical and skillful types—can be especially critical and rigorous influencers, untethered from the mainstream news cycle and its easy dogmatisms.

Of course, influence only goes so far. As is the case with the online right, it’s easier to energize an established party and open it up to change than it is to direct that change toward your goals. And now, in a time when both parties are increasingly aware of the power of the digital fringes, you’re probably more likely to be instrumentalized by the mainstream than you are to influence it. This is one of many reasons to be thankful for the haven of art and the seeming insularity of online communities. Projects and communities like DNR open artists up to the influence of each other and of active audiences, and shield them from the pressures of failing institutions and the demands of the culture war. I think this book is a stunning example of what that freedom affords.

Our project exists because institutions—the “artworld,” universities and museums and galleries and so on—are failing the people they are supposed to serve. And although we dislike the institutions as they are now—slow and enamored with repetition, bent on amplifying the same vague liberal complaints and tired gestures—we are fighting for a day in which discretion and curation can once again return to the benefit of artists.

It's the fall of 2020 and my undergrad education is falling apart and I am cruising through Zoom school. I’ve decided to split my time between my studio practice and preparing for reading group. Margo and I are fully immersed in what would come to establish itself as a peer-to-peer school for artists suspended over social media.

The books we read opened up our political imagination, and challenged our self conception. They offered a name to something I always felt and could never articulate: a sense of capitalist realism, the feeling of defeat and inability to imagine a coherent alternative to capitalism.

Why be an artist? And, if you do make art, where does it even go? The art world that young students are being trained for simply does not exist. My undergraduate program sensed this, training us on the sly to become artists-as-social-workers. These artists use their flexibility to act as mediators and fundraisers, providing the care otherwise left “blank” by the state.

Much of the capital A Art of our time is shy to be itself, subordinated to charity efforts or endless technical novelty. In this moment of institutional failure, artists find themselves in alliance with platforms to popularize and grant visibility, and their status as content creators seems a dig at what art can truly be. Platforms are not institutions, their curation not tied to stewardship or any centuries-long conversation of what constitutes a creative work. And in the world of new media, there is a deep suspicion of any formal training of art. Timelines of influence are lost in the noise to signal ratio. This attitude ultimately sides with the weakening of curation, and the every-man-for-himself mode of digital art production makes for a landscape where art cannot seem to house or give context to any of what it produces.

When we talk about our project as a parainstitional space, it is not because we believe that these problems can only be answered by a fringe community, as the direct action focused art collectives competing for the Turner Prize would lead us to believe: It is no replacement for strengthened social democracy. Talking to friend and community member Nate Sloan, of Pneumatic Materials, he reminded me that the goal isn’t just to disrupt. Rather, we must disrupt in order to end the disruption that is neoliberal capitalism—the slow dismantling of social programs and a shift into mass privatization.

Enter: the research aspect. While informing the art practice of the community, it also serves as an early detection of emergent trends that will soon become political currents. Censorship in the mainstream is met with neoliberal institutional rot, which is met with the humanities already under crisis—seemingly, there is no coherent way forward. Facing this impasse, Do Not Research takes a full dive into the expressions and desires of the “very online” and the build up of unique political identities. DNR will build the context to better understand online culture and the space to launch new creative practices for today.