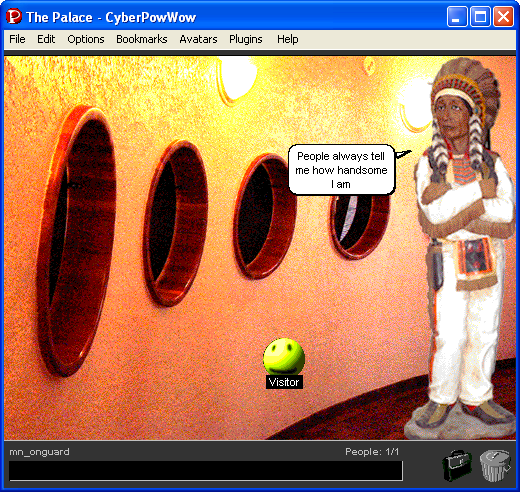 On December 10, 2022 Rhizome will present the first major U.S. museum presentation of CyberPowWow at the New Museum. First launched in 1997 by the Nation to Nation collective—Skawennati, Ryan Rice, and Eric Robertson—CyberPowWow was one of the first major online art exhibitions which took place on the web and in The Palace, a multi-user, graphical chat environment, now obsolete. CyberPowWow was also activated by in-person gatherings where community members would access the exhibition together. Rhizome's exhibition will take place in the New Museum Sky Room and will feature CyberPowWow presented in legacy computer environments together with ephemera from the Indigenous Digital Art Archive. Alongside the exhibition, artist Skawennati, scholar Mikhel Proulx, and Rhizome’s Preservation Director, Dragan Espenschied will participate in a panel discussion at 3pm in the theater.

Rhizome's staging of CyberPowWow for this exhibition is based on the “canned version” created in 2011 by Jason Edward Lewis, one of the participating artists. Rhizome’s digital preservation department created an index of all of the components of CyberPowWow, making the canned version available in a more robust and portable software environment using the “Emulation as a Service” framework, and re-enabling links to preserved web resources. 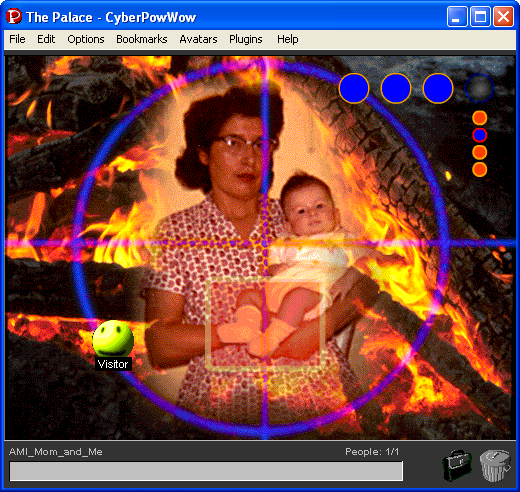 CyberPowWow took place in two online environments: the web, and a proprietary, multi-user, graphical chat environment called The Palace, first released in 1996, and now obsolete. Both environments were interlinked. The canned version contains installable executable files from a 2000 version of The Palace server and client, and files originally found on several servers for artworks located on the web. Today, The Palace software package can be installed on legacy versions of Windows in an emulator, but it contains links pointing to live web URLs that cannot be accessed by software from the early 2000’s, as most web traffic has become encrypted with algorithms that were introduced much later. This breaks the connection between artworks presented in The Palace and on the web.

Using the framework “Emulation as a Service,” which manages online access to legacy software environments, Rhizome’s preservation team expanded the canned version of CyberPowWow to include a fully working instance of Windows XP with The Palace, Internet Explorer 6, and the required browser plugins. This package is easily portable and can be presented on local computers in a gallery space as well as on the web, allowing users to bypass the requirement to install a local emulator in order to access CyberPowWow. Websites linked from The Palace were reconstructed from files contained in the canned version and data found in public web archives, and included in the emulation setup. 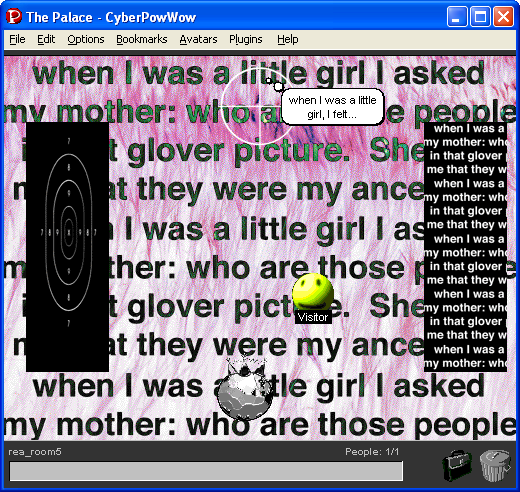 It is important to note CyberPowWow was originally created with the multi-user capabilities of The Palace in mind, which allowed users to explore the different “rooms” together and chat. However, the version presented in this exhibition does not support multi-user functionality due to technical challenges. Rhizome is currently evaluating possible strategies that would allow a multi-user version to be made available in the future.

Exploring the treasure of digital art history that is CyberPowWow in depth and contributing to its continued longevity has been incredibly rewarding. We hope this presentation is merely the first step in a long rediscovery of CyberPowWow and the possibility it represents for expressive online communities. 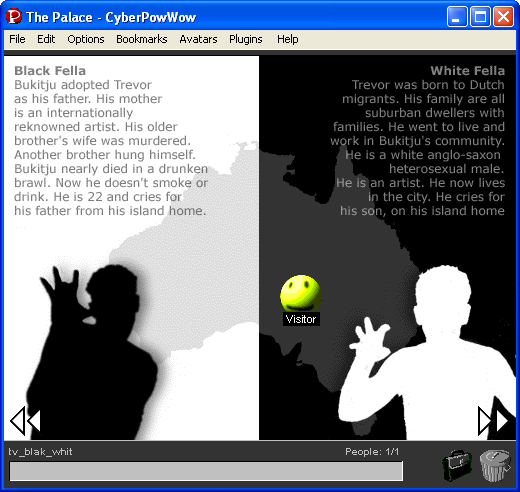 Digital conservation was led by Dragan Espenschied, Preservation Director at Rhizome, with the support of Lyndesy Jane Moulds and Yushien Chen. The "canned version" of CyberPowWow was made by Skawennati and Jason Edward Lewis.