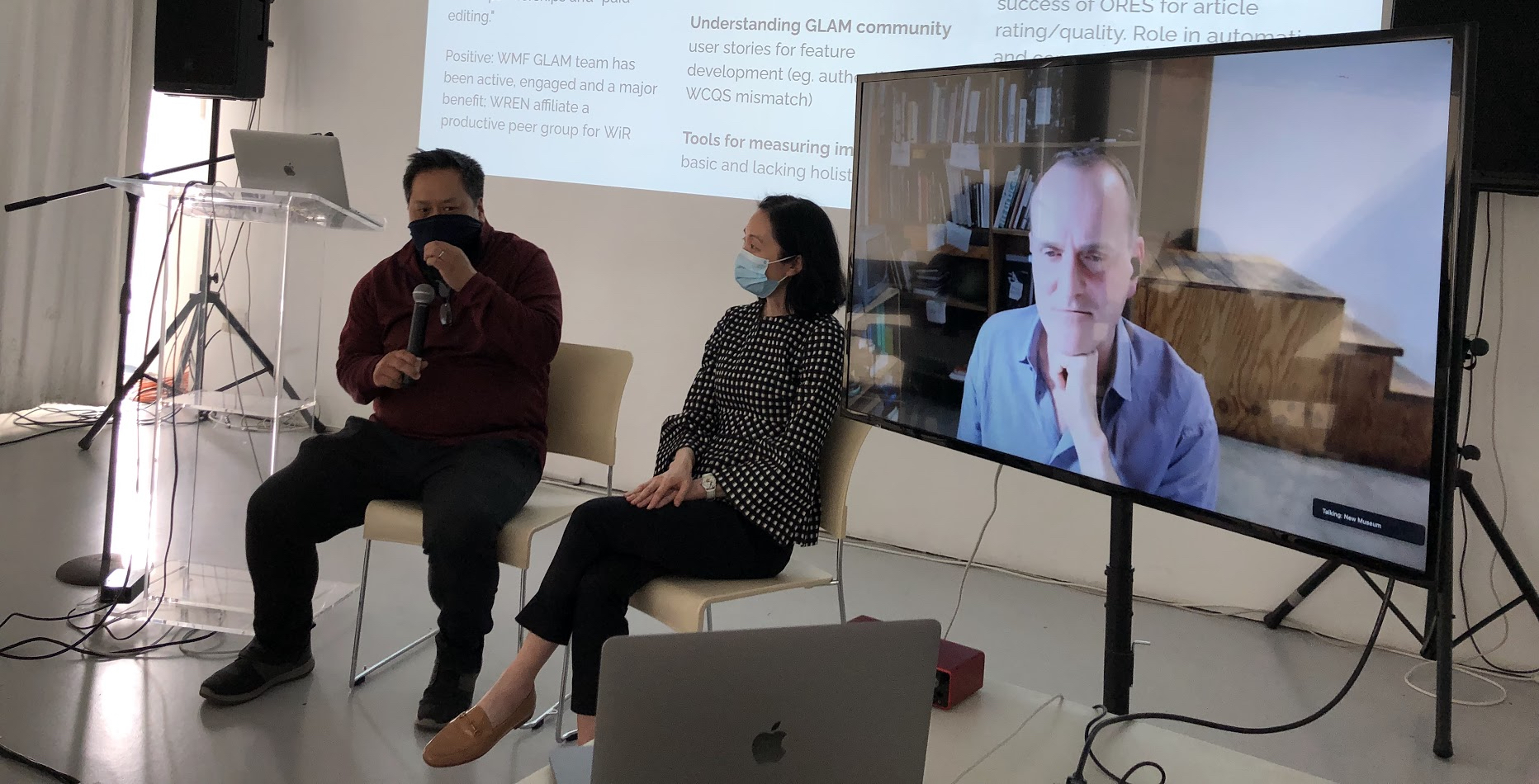 Rhizome recently acted as host of a one-day learning program for the Wikimedia Foundation Board of Trustees, held at the New Museum on March 22, 2022. Organized by Ben Vershbow (Director, Community Programs) and Fiona Romeo (Senior Manager, GLAM & Culture), the event was intended as a reflection on both the success and challenges of Wikimediaʼs work in the cultural space.

You might be wondering, what does Rhizome have to do with Wikimedia? Well, when Rhizome was relaunching the ArtBase, we did it using an instance of Wikimedia’s software Wikibase—the same that powers Wikidata, the machine-readable, open data set that is the foundation of Wikipedia itself. For our complex archive of born-digital and net-based works, this software is far superior to any traditional collection management tool. With Wikibase, for example, we can describe large groups of creators, artworks that change over time and have multiple distinct variants, and artworks that are difficult to describe using normal adjectives like size or material.

Despite this embrace of Wikibase, it was not possible to develop the ArtBase within the Wikimedia ecosystem itself. Wikipedia is user-edited, and the ArtBase is maintained by Rhizome staff. Wikimedia images are creative commons licensed, and ArtBase images may be under the artist’s copyright. Thus, we use Wikibase’s linked open data capabilities to allow ArtBase to participate in a wider network of open knowledge, but retain our role as steward of our own data.

One major challenge is features needed for specific deployments of Wikibase must often be aligned with the development of Wikibase as a whole. To help coordinate this process, Dragan has been active in forming a Wikibase Stakeholder Group, with the intention of advocating collectively for needed changes and supporting independent development.

Dragan’s presentation at the Trustees’ learning day represented something of a departure from the program as a whole; the other speakers focused on ways to improve Wikipedia and Wikidata, rather than on creating separate instances. The first session, Knowledge Equity, focused on initiatives that promote greater inclusivity on Wikipedia from a range of speakers:

Participants brought valuable insights into issues in Wikipedia’s editing culture and the challenges and rewards of working with communities to document and archive underrepresented areas of knowledge.

A second session, Knowledge as a Service, included Dragan’s presentation as well as another about Wikipedia initiatives at the Met Museum by Andrew Lih and Jennie Choi. The Met described their efforts to share knowledge about their collection via Wikipedia, an initiative that has enriched public awareness about their collection and brought accolades to the institution. In contrast with Rhizome’s strategy, the Met’s strategy is to maintain a traditional collection database, and to publish appropriate materials to Wikimedia Commons and Wikidata where possible. It was evident that, even without the kind of software development that Rhizome has taken on, publishing to Wikipedia represented a major investment of resources for the institution.

The presentations brought into sharp relief some interesting questions about Wikipedia and its strategies for inclusivity. Is it possible to scale this system to encompass all human knowledge? What are the infrastructural limits, especially as automated updates from researchers accelerate? What are the cultural limits—can Wikipedia accommodate differing cultural standards and beliefs, like nonlinear time? Can policy changes and community advocacy change the culture of Wikipedia editors to be more sensitive and inclusive?

In the face of these challenges, Dragan’s presentation pointed towards an attractive and radical alternative—decentralized, federated databases with culturally appropriate standards and communities, augmenting each other, and Wikipedia proper. The challenge of actually implementing something like this, though, is so daunting. On top of the inspiring care and effort that is already being put in so that communities can self-archive and share knowledge about themselves, asking for an even greater effort to build customizable, independent infrastructure for such archives seems daunting. It took Rhizome six years to relaunch the ArtBase in this way—but through this work, and the efforts of the Wikibase Stakeholder Group, we hope this will become considerably easier in the future.

And in spite of the challenges,  it may be necessary. As our former researcher Lozana Rossenova has written, “Software infrastructure shapes the way in which knowledge about digital cultural heritage is created and captured, organized and shared.” Efforts to confront cultural challenges in the knowledge that Wikimedia organizes must consider this infrastructural layer.

If you work at an organization that might benefit from participation in the Wikibase Stakeholder Group, please consider applying to join.