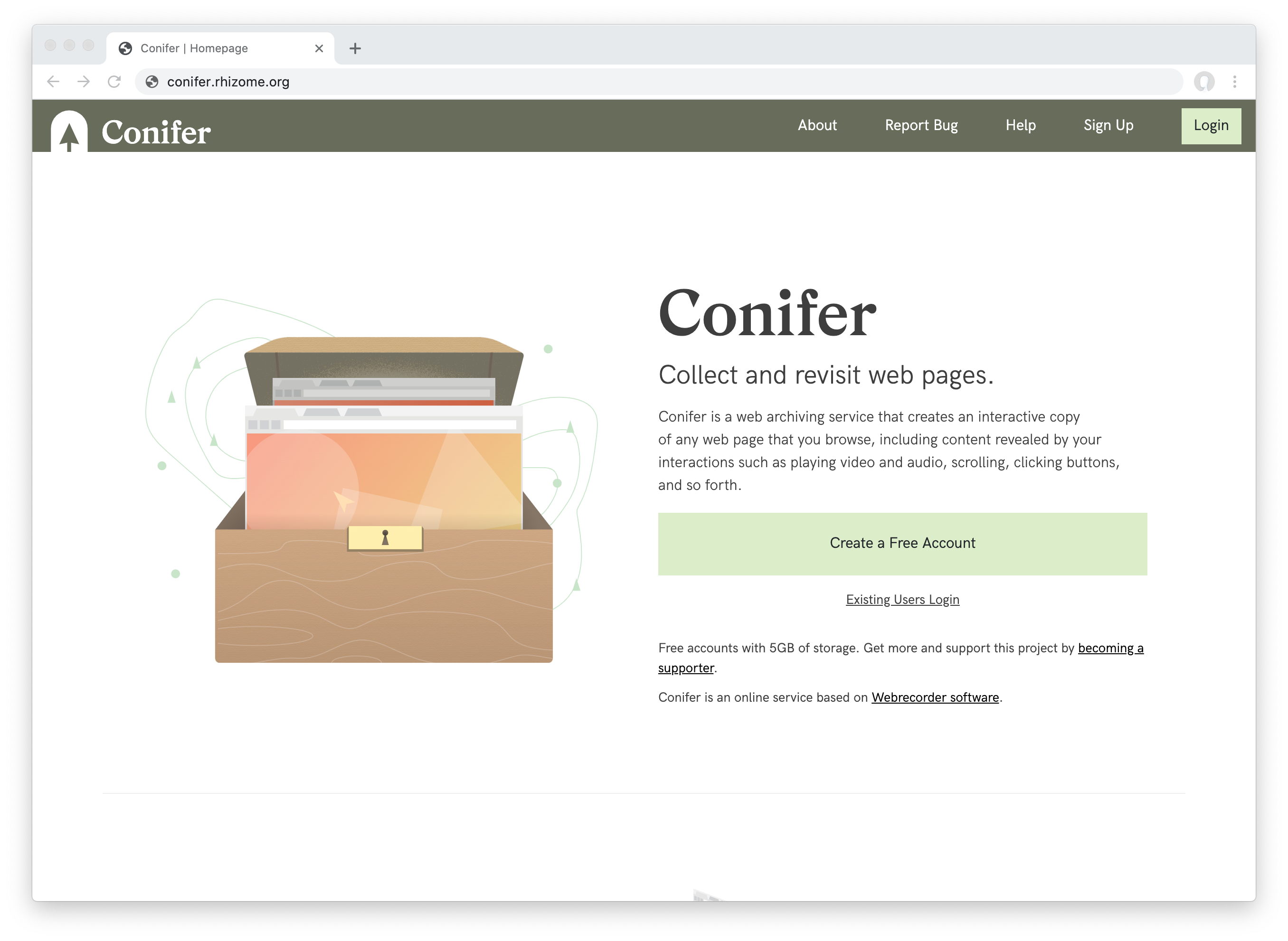 Today, we are rebranding webrecorder.io—the free-to-use web archiving platform hosted by and developed at Rhizome since 2015—as Conifer, located at

We're doing this to commit long-term to web archiving as a cultural practice, and to differentiate this online service from the core software components. Conifer will continue as a Rhizome service, integrated into our programs, and alongside ArtBase (our collection of 2,000+ born-digital artworks) into the future. We’ve made every effort to ensure that this transition is seamless for our users, whose work is often critical and time-sensitive.

We chose the name Conifer to express our view on web archives and collections as bound items that, once captured, can remain available no matter the season, and like cone seeds can make a dynamic comeback when placed in the right environment.

Core software components will continue to be further developed as scholarly communications infrastructure and desktop tools by a new entity, the Webrecorder project. Read more on the Webrecorder blog. 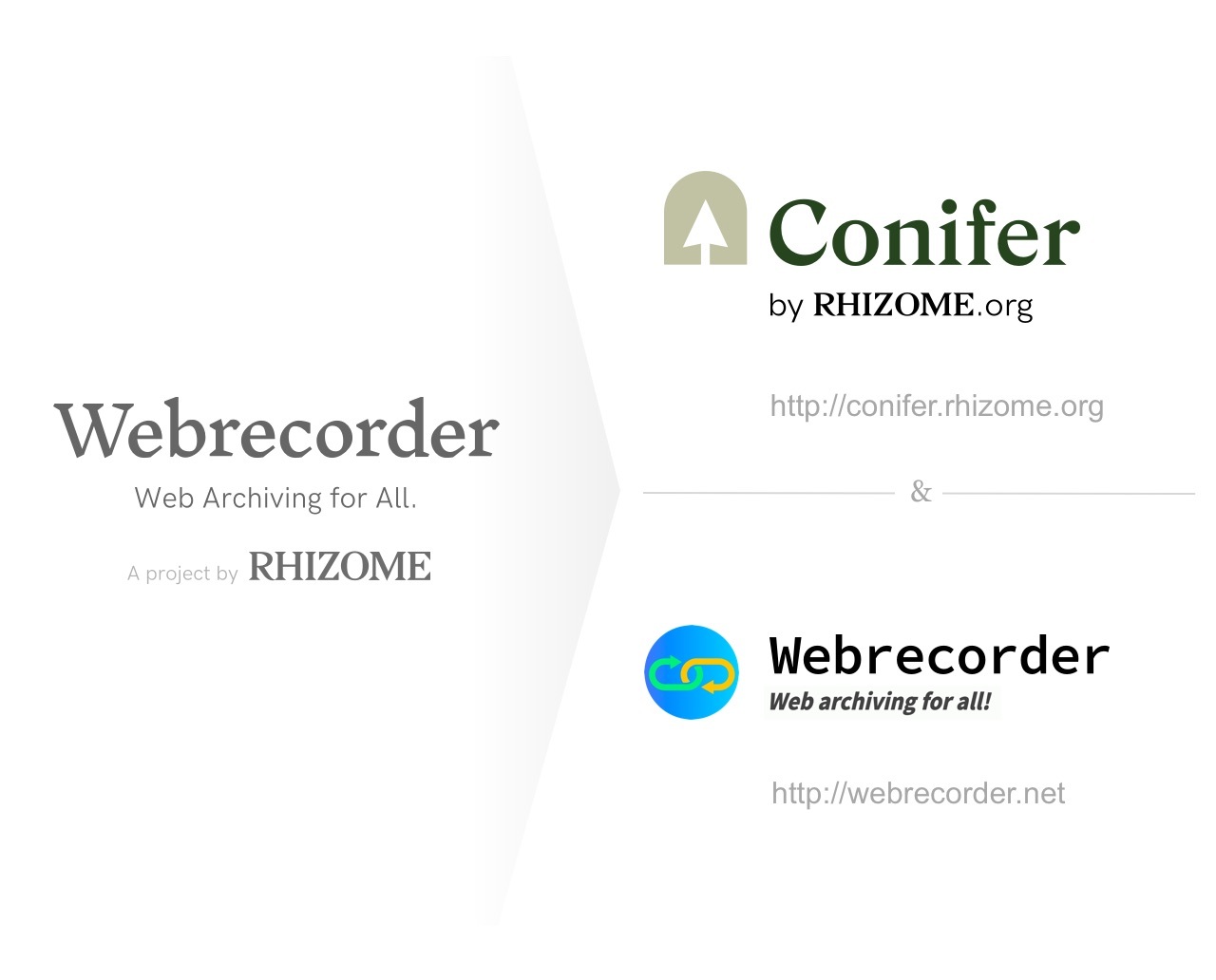 What about everything located at webrecorder.io?

Everything you may have previously found or created there will be at the new domain, under the new brand, and all links will be forwarded. Your login will remain the same, and terms of service also remain unchanged.

This may be all you're interested in. The rest is back-story, reasoning, and thank yous.

Why are you doing this?

When Dragan Espenschied joined Rhizome as conservator in 2014, one of the complex questions that he faced was how to archive and ensure access to content on Facebook that might be of art historical value. His effort to address this led to a collaboration with then-independent developer Ilya Kreymer on a prototype web archiving tool called Colloq. With the generous support of the Mellon Foundation, the adoption of Ilya’s prototype of Webrecorder and related tools launched as a major software and service development project at Rhizome in 2015.

Webrecorder's motto is “Web Archiving for All.” The hosted service has been a key effort in delivering that commitment, but only one manifestation. Software under the Webrecorder umbrella has diversified since launch and found different types of users and contributors. For instance, Python Wayback, a main part of the project responsible for rendering web archives, has been deployed by the UK Web Archive at the British Library and Arquivo.pt. Webrecorder's backend has been integrated into Perma.cc, and related collaborations with LOCKSS and Stanford University Press are underway. We've also released desktop app versions of the hosted service to support local capture and access.

So what is the plan?

In late 2019, we partnered with Code for Science & Society (CS&S), an organization dedicated to supporting sustainable, community-based open-source software projects, to create a management and stewardship structure for Webrecorder focused on users’ needs.

As part of these conversations it became apparent that separating the hosted web archiving service (webrecorder.io) from its overall technical development would be the best way forward. The technical development will be driven by continued work from Ilya at the Webrecorder project, along several key areas, maintaining and expanding current software but also focusing on integrating web archiving into existing digital preservation infrastructure, such as institutional repository systems, for the scholarly communications field and beyond.

Through Conifer, Rhizome will continue contributing new features to the web archiving field. Conifer will focus on the needs of the cultural sector we serve, leaning into our role as a public institution championing born-digital art and culture first and foremost. We have a long history of offering digital preservation tools to our communities—the most well-known is ArtBase, which was a groundbreaking project in institutional open collecting. Conifer is a natural extension of this history, and will play a significant role in coming updates to ArtBase.

This undertaking owes its greatest and continuing gratitude to The Andrew W. Mellon Foundation and its Scholarly Communications program. Our collaboration with CS&S has taken place as part of grant awarded this year to ensure the sustainability and stewardship of technical and community work undertaken at Rhizome since 2016. Without the Foundation's visionary, multi-faceted support, we would not be at this significant moment today.

Additionally, Rhizome thanks the Knight Foundation and IMLS for their support of research around digital social memory—an area of programming bringing together archivists, artists, folklorists, and others, that we plan to continue in the future at Rhizome.

Finally, Rhizome remains grateful for all the efforts of its staff who have worked on this project: Mark Beasley who has tirelessly built release after release while also working on rhizome.org and artist-centered development projects;John Berlin, who did pioneering work on web archiving automation; Anna Perricci, who thoughtfully cultivated community around this service, rethought its sustainability, and advocated for users at all points; and Pat Shiu, who has crafted user-friendly and gorgeous design for Webrecorder and now Conifer, along with Rhizome's overall brand guidelines.