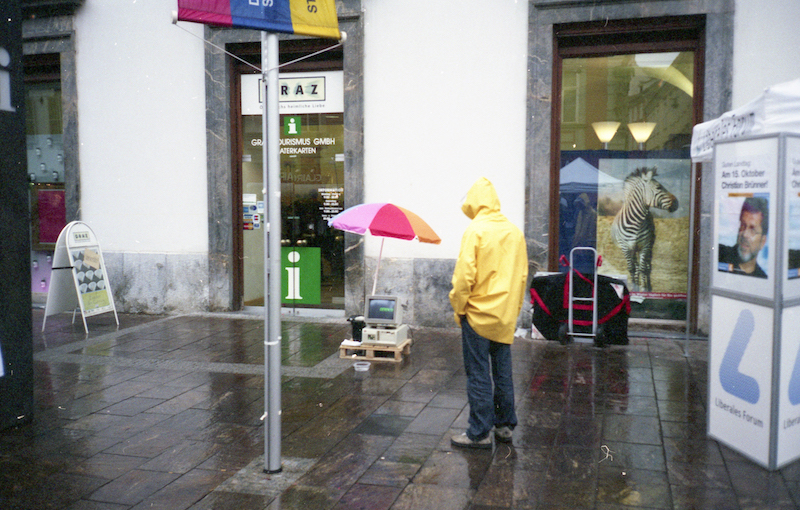 This essay by the late Armin Medosch was originally published in Telepolis on August 9, 1999 as “386 DX: Die erste Cyberpunk-Band der Welt.” Rhizome has republished it alongside a presentation of Alexei Shulgin's 386 DX in Net Art Anthology online and in the exhibition “The Art Happens Here: Net Art's Archival Poetics” at the New Museum.

It’s the final evening of the Wizards of OS conference. Berlin’s WMF club offers a strange sight: the former photographer and net artist Alexei Shulgin is on the stage. A computer keyboard hangs down from his shoulders like an electric guitar. He strokes the keys with wide-ranging arm movements. Computer animations flicker on a projection surface, which are more closely related to early Amiga 512 or even Commodore 64 sprites aesthetically than to today’s standards of club visuals. Strange “sounds” are issuing forth from the club speakers. These are well-known rock hits, including songs by The Doors, Nirvana, and the Sex Pistols—but they are played by the actual star of the evening, a PC with a 386DX chip, clocked at 40 MHz. 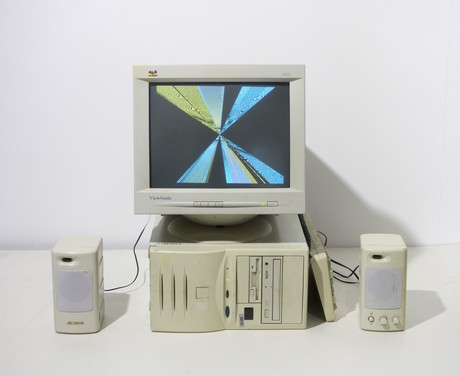 Shulgin’s arm movements are actually just visual support for the live character of his gig, because the computer plays the music all by itself. By pressing the function keys of his keyboard, he alters parameters of the visual accompaniment. Sometimes patterns of lines with moiré effect (always good), then circles, color bars, flat shapes, and triangles. The musical part is done by a soundblaster card of an older model with an integrated MIDI sequencer and a text-to-speech module that can also sing. Thus, 386 DX can be called with good conscience “the first cyberpunk band.”

The story of 386 DX started just over a year ago. Shulgin was tired of net art (actually more precisely “net. art,” because that more precisely designates a certain grouping). In his opinion, the internet provides only a limited number of possibilities for artists, and these had already been explored by the net.artists. Although since then there had been a new hype among artists every few months, it was limited, in Shulgin’s view, to the spread of a new technology. “Last year, network radio was big,” he said, “now it’s video streaming or direct media.” At any rate, Shulgin wanted to do something completely different, and came up with the idea of using a computer to perform as a kind of street singer.

Hence the need to use the cheapest possible technology. The housing of the musically gifted DX looks like that of a worn-out ex-office computer, a slightly gray, dirty light beige, slots for hard disk and floppy disk drives, which have certainly been installed and removed several times. If the computer was just a tad slower, it could no longer handle the task, and even so it sometimes goes out of sync. The biggest problem was the synchronization of the MIDI files with the vocals from the text-to-speech module; it took a lot of fumbling until it worked out reasonably well. But even today, the live gigs of instrumental and vocal tracks go out of sync sometimes. This low-tech attitude combined with a DIY method is central to Shulgin’s message. 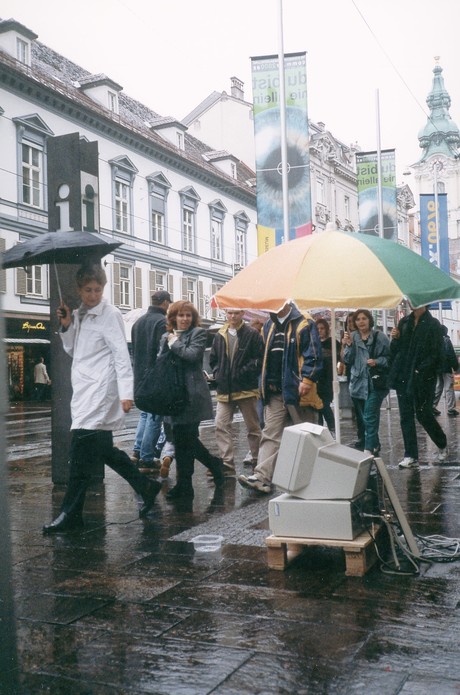 Shulgin is now on an extended concert tour. He does not want his concept band to perform only within the media art scene. Thus, after Berlin, he performed in Bristol, and then three concerts in London: at an internet cafe, at a party in the “Foundry,” and most recently at the famous “Articultural Show” on the Southbank in front of the Royal Festival Hall. Other concerts will follow, because 386 DX will have to laboriously perform its way to the top, to rock fame, like any other young, unknown band. The London institution Artec wants to take the project under its wing, and a CD will be produced, but it is to be distributed by a “real” music label.

But there could be a problem: the music itself. At concerts, 386 DX is a highly amusing affair. The cover versions of well-known rock songs create a touch of euphoria, which is dampened by the fact that the sound profile is very much that of an integrated MIDI sequencer, which does not “rock the house.” This is also strengthened by the visuals, generating an interesting tension between euphoria and irony, being drawn in and then distanced again. As the evening progresses and may be enhanced by one or a few alcoholic drinks, it can lead to very emotional results, including cheerfulness, melancholy, and exuberance. Lovers of retro digital aesthetics will be especially happy.

But little of this will be reproduced by a CD in your home sound system.