The Ephemera Mine
By Bruce Sterling 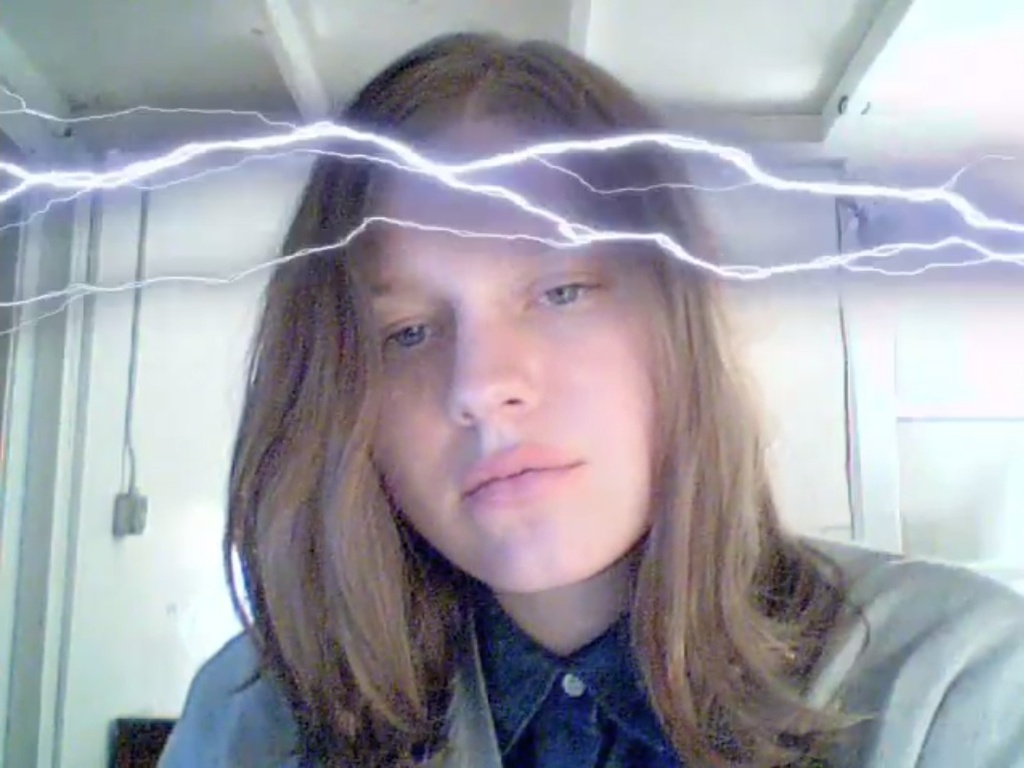 This article accompanies the inclusion of Petra Cortright’s VVEBCAM in the online exhibition Net Art Anthology. The vintage punctuation of “net.art” here reflects the preferences of the author. For more about spelling and punctuation, see Rhizome’s style guide. – Ed.

How did one know that Petra Cortright was a “net.artist”? It was because YouTube was expelling her.

This particular Cortright video, VVEBCAM, looks inoffensive on the face of it. The face is Petra Cortright’s, and she’s examining the screen with much the same bemused expression as the online viewer.

There’s something vaguely wrong with that, though... Because a “cam girl” of the period had an interactive etiquette. A YouTube cam girl should be vamping it up in an anxious quest for some public compliments in her comments, and maybe angling for some Amazon gifts from her “wish list.”

Yet Cortright is merely gazing absently at her own hardware, while glittery, digital tack and kitsch cascades down the screen that separates us.

The mischief took place behind the scenes, when the video was uploaded. It was in the tags that video creators crammed into YouTube, so as to optimize some Google search engine action.

If you’re practicing net.art, it’s a tad difficult to promote your creative activities in Artforum and Frieze. So it’s been a common practice to gently hack and maybe fracture a few terms-of-service rules, or perhaps provoke a loud threatened lawsuit from somebody newsworthy, so as to get a proper toe-hold in the public eye. That's how the working net.artist breaks the placid surface tension of public indifference. Net.art is not merely art on the internet. It’s art that bends the net out of shape.

Cortright was one of the first young YouTube performance artists to scare up trouble by pranking the rules of vernacular video. It wasn’t severe trouble–her video was merely banned–but VVEBCAM won her some surprised acclaim from the cognoscenti.

Then her video work was able to assert itself on its own merits, which are many. These merits have to do with use of digital tools, pushed to Jackson Pollock levels of action.

Petra Cortright is a rare digital artist who works from the shoulder. She’s spontaneous, un-calculated, real-time, and performative. In VVEBCAM she is flinging those graphic elements into the YouTube frame for the joy of watching ‘em splatter. Those appropriated sitars, dancing pizzas, puppies and kitties–they’re “sick.”

They’re not decorations or augmentations; they don’t make her look any cuter. That cuteness enhancement had to wait a decade, until Snapchat grabbed some venture money and could stick bunny ears onto the user base, using face recognition with AR techniques.

Cortright, by contrast, is making net.art on a desktop machine. She has what millions of other consumers have, a webcam, a back bedroom, and a laptop with heaps of cheap or free video-manipulating tools. She wants to use them to her own purposes, but why should her personal computer activities conform to anybody else’s public standard? What are they going to do about that–throw her off YouTube?

Well, they did, but that was fun. VVEBCAM is “fun-driven” digital art. When the dancing pizzas or the lightning bolts arrive on her screen, she simply wants to know what they’ll do. That’s why she has that solemn, contemplative look on her face as the augments careen around. She’s not pleasing us. She’s unashamedly more interested in this digital process than we are.

It’s a process like Matisse–a favorite Cortright artist–doing his studio cut-outs with his scissors. He’s got his sheafs of colored gouache papers, he’s got a big wall to mount them on, he’s got heaps of snipped-out vibrant shapes all around his chair. Matisse doesn’t number all the shapes and arrange them in formal algorithms like some software engineer; no, Matisse has a practical infinity of image generation, a vast mine of scissored ephemera. He pins them up in clusters to see what works.

Cortright is gesturing, she is doing cut-and-paste assemblage in real time with found digital content. To be “sick” is to expose the goofiness, the flaws, the corniness, of a planetary-scale post-internet social media system.

Sure, it’s YouTube, so it thinks it’s everybody’s daddy, but that only matters if she can be bothered to care. She doesn’t care. To be “sick” is to be bright, young, and outside the bounds of YouTube’s assumptions. It’s performance art that is digital and entirely about being digital, yet its intuitive and authentic. It can’t even bother to be self-consciously “surreal” or “absurd.” No, it’s simply unheard-of, full of otherness, new, pretty, and free.

VVEBCAM is no longer new, and Petra Cortright did rather well after this notorious video; she grew up, she got married, she got a California house and a studio and some art gallery support. She hangs out with the daughter of a Beatle, she does lots of handsome prints and paintings, and has become a stellar representative of the “post-internet.” However, in this video she is new and feral, unexpected, unclassified. Just, very out-there.

It’s been a while since I first witnessed this work of art, but it comforts me now to know that I will always like it.