What Will I Be When I Grow Up? A Production Company
By Lauren Studebaker 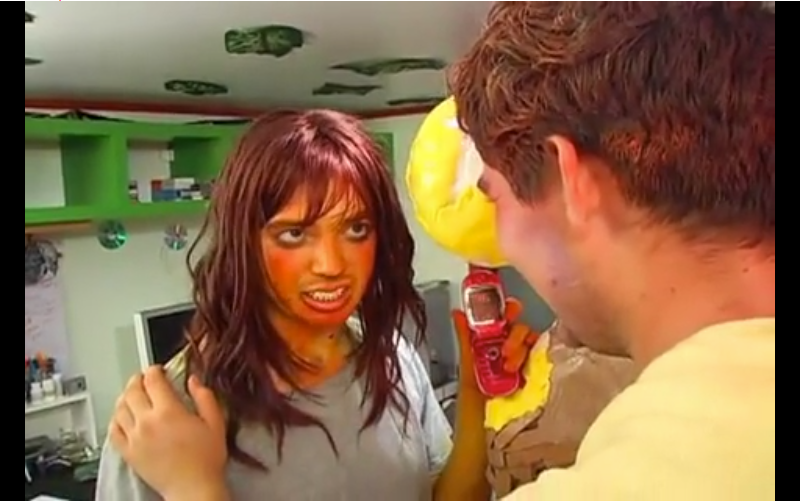 This article accompanies the inclusion of Ryan Trecartin's I-BE AREA in Out of Order Youtube Messy-Format (2008) in the online exhibition Net Art Anthology.

Released at a time when social media platforms were still in their youth, Ryan Trecartin’s I-BE AREA (2007) feels comfortably contemporary today, more than ten years later. With its exuberant adolescence and multiple, chaotic narratives of ontology, the film was a harbinger of a future that has now come to pass.

The film addresses questions of the post-human, queer subcultures, race, the post-gender body, reproduction, family structures, and interpersonal relationships–some of the many facets of the multiplicity of self inherent to the social web. Actors rapidly cycle through names, genders, and appearances. Multiplicity and hybridity is expressed at all levels of the film's construction: dialogue, costume, make-up, and collaboratively constructed environments and props, and then again through Trecartin’s interventions in post-production.

Trecartin’s signature editing style is perhaps the most essential to the construction of the work: Trecartin himself has stated that  “everything is performed for the edit––performed to become live through mediation. Editing is itself a part of articulating the character, and so I see it as a performative gesture.” The edits, comprising rapid jump cuts, manipulation of playback speed, and adjustment of vocal pitch, allow characters to perform in disjoined spaces and fractured time, stitching together sentences that are delivered in multiple locations into a continuous monologue. The addition of visual effects is also pertinent to narration and plot development: references to the screen, the browser window, and the avatar become transitions between scenes that often involve travel through a screen or an interface to arrive at an alternate location.

The film’s intentional confusion between life on-screen and off extends to its surroundings. The physical environments that accompany Trecartin’s video in the gallery space, as well as the work’s alternative presentation as a series of parts uploaded via YouTube and viewable on one’s personal browser, implicate the viewer as an active participant in the scene. 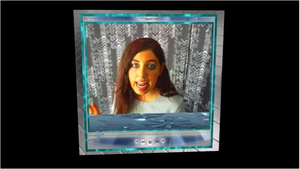 I-BE AREA is built upon the creation, dissolution, and collision of personal spaces, called “areas” throughout the film. Digital elements are wholly recognized as extensions of the self, as well as the ability within the network to form “multiple selves.”  This ability is most fully realized by the character of Oliver, who later becomes Amerisha (played by Trecartin) after a clone named I-BE2 adopts their personality and renames themself. In I-BE AREA in Out of Order Youtube Messy-Format (2008), the exchange is contained in a YouTube upload titled I BE AREA (I-BE2 becomes Oliver becomes Amerisha). Original Oliver expresses their digital/personal ennui by way of a video-player popup that sets-up their individual “area”:

“Hi, my name is Oliver. I'm 5'11” and I look like this. I’m just sick of it though. Oliver, what are you sick of? I'm talking about my lifestyle vibe. My horoscope, my attitude, my email address, my fucking mother everyone. The books that I don't read, the boys that I never dated and the girls that give me high five. My CD's on freakin' repeat basically. I know. Rewind. I could leave any day and just go. But don’t hear me wrong. I love my Total Ohio awesome. My liberal laid back lesbian moms. And my incredibly sexy , gay girl siblings.

But fuck it. I just found myself and it doesn't look like anything. Not Oliver, not Ohio and not gay. It looks like this kind of. Sorry. I need a fucking poser to be me so I can compassionately ditch this shit with love and care while knowing that some well bred loser bachelor motherfucker is happy butt-fucking my old lifestyle. My one-way plane ticket to Brazil costs 995 international dollars. My address should appear now, send me a one-way money order and you get this box. Inside is my cell phone, outfit, all my passwords slash keys, plus a live subscription, hard copy PDF file of all the people I know in my life, how we relate and why I do the things I do.”

Oliver’s monologue consists of references to her technological extensions(cell phone, passwords, “PDF file of all the people [she knows] in [her] life”) as the necessary tools to usurp her being. The body is no longer useful as the physical vessel of the self; in its place, digital material may be transferred from host to host, and manipulated at will. Once I-BE2 becomes Oliver (and almost immediately, Amerisha), they begin making plans for their new life. Amerisha mentions that the old Oliver is now in the trash with Amerisha’s original avatar (the origin of I-BE2, who was deleted in an earlier scene), and looks into her future, stating, “What will I be when I grow up? A production company.”

In seeing a future self as an engine for media output, Amerisha’s statement feels especially prophetic of a future of cultural production through social media. The idealization of the production-company-as-self (it appears two more times in the film’s transcript) is one of the most solid reaches into the near future that Trecartin presents in I-BE AREA. An increasing necessity for immaterial labor in a mediated stage of neoliberalism presents the need for an updated Foucauldian “entrepreneur-as-self.” The massive viewership and subsequent monetization of platforms such as YouTube has given rise to an unprecedented new generation of independent content producers, or “influencers,” often using editing techniques akin to Trecartin’s in an attention-grabbing, formulaic way (watching footage of YouTube giant-––and as many would argue, villain––Jake Paul destroy a room in his production company’s mansion resembles an explicitly masculinized version of I-BE AREA’s’s chaotic woodshop scene). In the case of both YouTube and other platforms, the focus for users has moved from interaction to a consistent output of content-as-identity through easily accessible channels provided by media companies–in exchange for the promise of a trickle of income which may be shut off at any time.

In an interview with Hans Ulrich Obrist in 2014, Trecartin compared the fast-paced, “panicked” way his films are shot with the way that  “people use technologies before they understand the implications of them, or before they even learn what, like, the actual function of a particular app is supposed to be.” Watching Oliver surrender their identity and abandon her selfhood through the hand-out of her personal data in 2018 bears a striking resemblance to the current mediastorm surrounding Facebook and Cambridge Analytica––which, come to think of it, sounds like a potential name for one of Trecartin’s characters.

This is not to say that Trecartin’s imagining of the future is a sinister one; the visions of technology in I-BE AREA are particularly euphoric when performed by the actors and environments, and through Trecartin’s edits. Trecartin often points out the collaborative element of his work, and the modifications actors make to his scripts (which come before anything else), a process that, nods to the potential for different cultures to emerge online through translation and transmission of digital tidbits, creating cyclical and deeply coded languages. The interplay between these participant-led interventions and Trecartin’s pre-established structure of multilinear narratives (or of the internet itself) gives the film a collective voice (and memory), which prefigures to dynamics that have since shaped multiplicitous selfhood online.