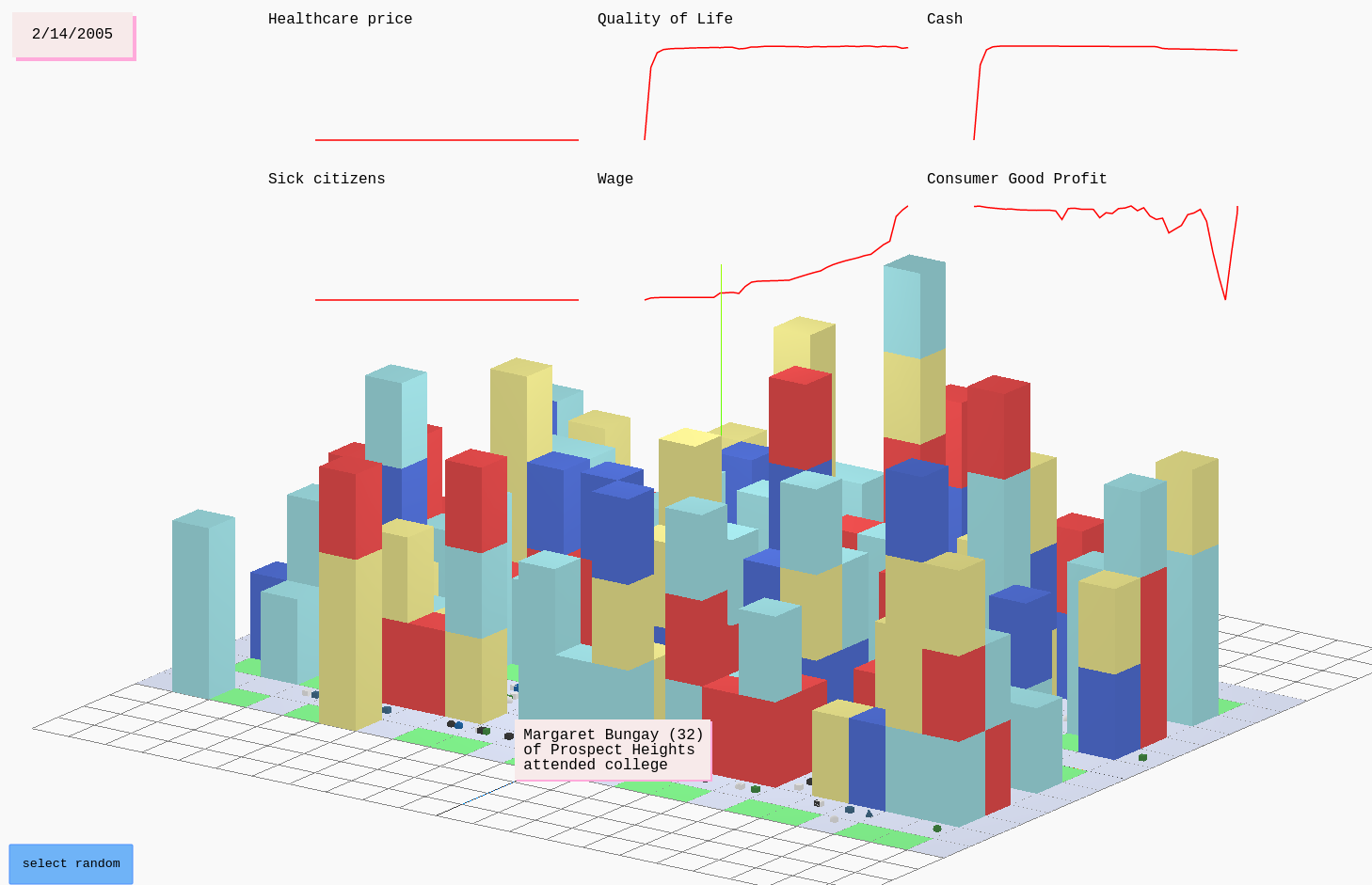 The role of simulation in planning is nothing new—it’s how Google Maps anticipates there’ll be traffic on a daily commute, and how the Obama Campaign in 2012 forecasted an electoral edge over Mitt Romney. It’s also used by stock traders to gauge investment patterns and by private and public defense organizations both to regulate border control and evaluate the effectiveness of different military strategies. In projecting existing data onto constructed scenarios, simulations are able to portray imaginable futures. These futures, however, bank on the predictability of human behavior—that people will operate the same way they have in the past, and that their tendencies can be reduced to discrete, codeable particulars.

But the technology underlying these models could also be used to simulate previously unimaginable futures. The data inputted could be altered to rig the simulation, allowing us to formulate responses to questions like:

What if a city’s economic policies were entirely at the hands of its workers?

What if a city’s residents didn’t have to work?

What if they all had access to affordable healthcare?

How would their lives change? What would they be freed to do?

In their digital thought-experiment Humans of Simulated New York, developed during a month-long residency at DBRS Labs, artist Fei Liu and writer and developer Francis Tseng offer a platform to discuss such hypotheticals, while laying bare the paradoxes at work behind large-scale planning and policy-making. First, the simulation assigns users a random identity, whose characteristics are culled from a database containing decades’ worth of actual New York City census data. Users must then propose and vote in favor of legislation that would benefit their new avatar. The success of the user is contingent on her investment in the character she’s given, however different from her that he may  be. 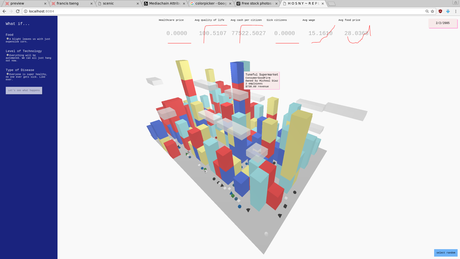 Unlike the more familiar urban simulation SimCity, in which infrastructure development takes precedence over the interplay of demographics, HoSNY dives straight into the invisible structure of the city’s political economy, placing it in an intimate relationship with the player-as-subject. The idea, according to the minds behind the project, is to address Fredric Jameson’s call in Postmodernism for a “situational representation” of the relationship between the individual subject and the “unrepresentable totality” of the society in which she takes part. It is best thought of as a fortified version of information visualization that immerses people in an experience of data, instead of merely presenting that data.

Perhaps the most crucial point the project raises is that bias and exclusion are inextricable bounds, aspects that define the construction of a city, no matter how “ideal” the city’s design may seem. The definition of a perfect society is always limited by the vision of its creators, from the pre-internet digital utopias of media theorists like Douglas Rushkoff to the post-technological societies of Ursula Le Guin’s Hainish Cycle series. Further, utopias have been defined by the shortcoming of exclusion since their inception. Think of how Thomas More’s relies on physical boundaries as a means of exclusion, and how Plato’s utopia relies on a bias toward different crafts.

By rendering this problem transparent, HoSNY may be an effective way of shattering the narrow frameworks of today’s most idealistic thinkers—the engineers and founders of Silicon Valley. If, as the simulation suggests, these tech-devotees—typically white, wealthy, anglophone, cis- males—could step into the mindset of a demographic they may claim to understand by the contours of their quantifiable aspects rather than their lived experiences, they just might have a better sense of how their plans for society actually affect people unlike themselves. What they’re likely to realize, as HoSNY points out, is that even their own philanthropic visions of utopia are stunted by their capitalist context and, more to the point, insurmountable alterity.

HoSNY has important predecessors in other highly instructive simulations, like Dwarf Fortress and Parable of the Polygons, themselves exercises on exclusion in virtual societies. HoSNY also has a non-virtual historical predecessor: Salvador Allende’s Project Cybersyn, which was a network of computers operating from 1971 to 1973. The computers were set up to predict what might happen if Chile’s workforce had decision-making power over its industries. The project gestured at the possibility of simulation to posit an unprecedented economic reality, although its short life-span questions the actual capacity of cybernetic systems to sustain one.

HoSNY also provides an alternative to classic economic models by taking into account irrational human behavior, building on the work of recent Nobel Prize winner Richard Thaler. By demonstrating that the far-off consequences to adjustments in the city’s management are unpredictable, the simulation points to the absurdity of relegating its operations to AI algorithms. But this is precisely what today’s “Smart Cities,” which embed digital technology across city functions to manage complex systems like traffic and resource consumption, are ignoring. As computer science professor Dan Rockmore points out, “thoughtful technology deployment” is increasingly devalued in a world where immediate profit takes precedence over the considerations of long-term repercussions. Such factors perhaps account for why we are only now dealing with the unwitting discrimination wrought by image-recognition software, or with the sociopolitical mess of Uber, even as it carries on with its plans for self-driving cars.

Problems like these might be avoided by getting young developers to read works of speculative fiction. Stories like Dave Eggers’ The Circle might, for one, help us foresee the dark consequences of pervasive surveillance technology in ways that data alone cannot. Rockmore notes that H.G. Wells’ The World Set Free helped Churchill anticipate the threat of atomic warfare. Similarly, tools like HoSNY might serve as a powerful strategic weapon to combat and question technological tunnel vision, since it uses the very vocabulary that resonates with contemporary developers. 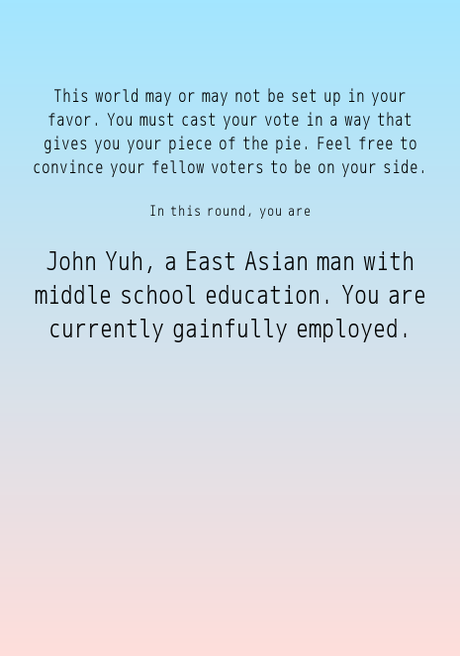 But HoSNY itself, as a data-driven project, shouldn’t replace the frameworks that keep a city functioning. While it may have considerable real-world applicability, it is meant to raise questions, not provide catch-all solutions. But blind faith in algorithms is catching on: Sony chairman Nobuyuki Idei has called for a universal city software, or “city OS” that sounds eerily like a real-world version of SimCity. And recently, the New Orleans Police Department secretly enlisted data-mining firm Palantir to implement a predictive policing program, whose dubious methods in inculpating criminals is already being challenged in court.

What’s more, basing policies on speculative fiction isn’t going to guarantee a more cautionary approach to dealing with societal complexities. The same Wellsian fantasy that fostered Churchill’s pacifism also justified his suprematist Malthusian policies towards India which led to the Bengal famine of 1943 that took the lives of over two million people. Even if imagination and technology are invaluable tools for envisioning a better future, they still need to be accompanied by a hefty dose of grounded, humanist discretion through democratic decision-making. 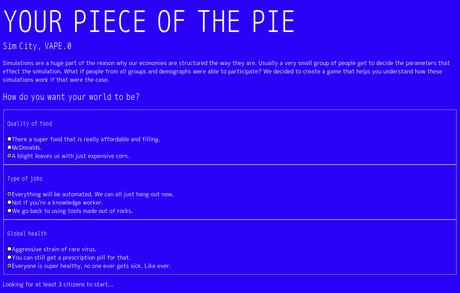 HoSNY may prove most productive for its potential as concept rather than as commodity, although simulations prove to be highly lucrative. In 2016, the Danish police reportedly paid Palantir up to $40 million to use their software to identify terrorists. Many virtual stock trading platforms, used to practice trading and investing, are paywalled (though trading simulations do not yet come close to real trading scenarios, in which success is determined over years, not months, and there’s real money on the line). Even if its machine learning algorithm may make anticipating the future a little easier, HoSNY still originates in part from the constructs of human hands, failing in action, but succeeding as art–a domain in which, according to Dena Yago, “practices that cannot function within generic constraints run up against the walls and expose fissures in the structures they are working in.”

HoSNY ultimately speaks for the potential of creative imaginaries as instructive tools. It is only within the infinite bounds of speculative provocation that the issues which projects like HoSNY discuss are even able to be brought to light, and evaluated in all their complexity. Taking them out of this discursive context and transferring them directly into non-virtual terrain poses the threat of negating the very point they’re trying to make – that  computer-run systems should be used to illuminate weaknesses and flaws in society’s scaffolding, but not necessarily to fix them.