All The News That's Fake to Print
Relevant, a new app for spotting propaganda
By Whitney Mallett 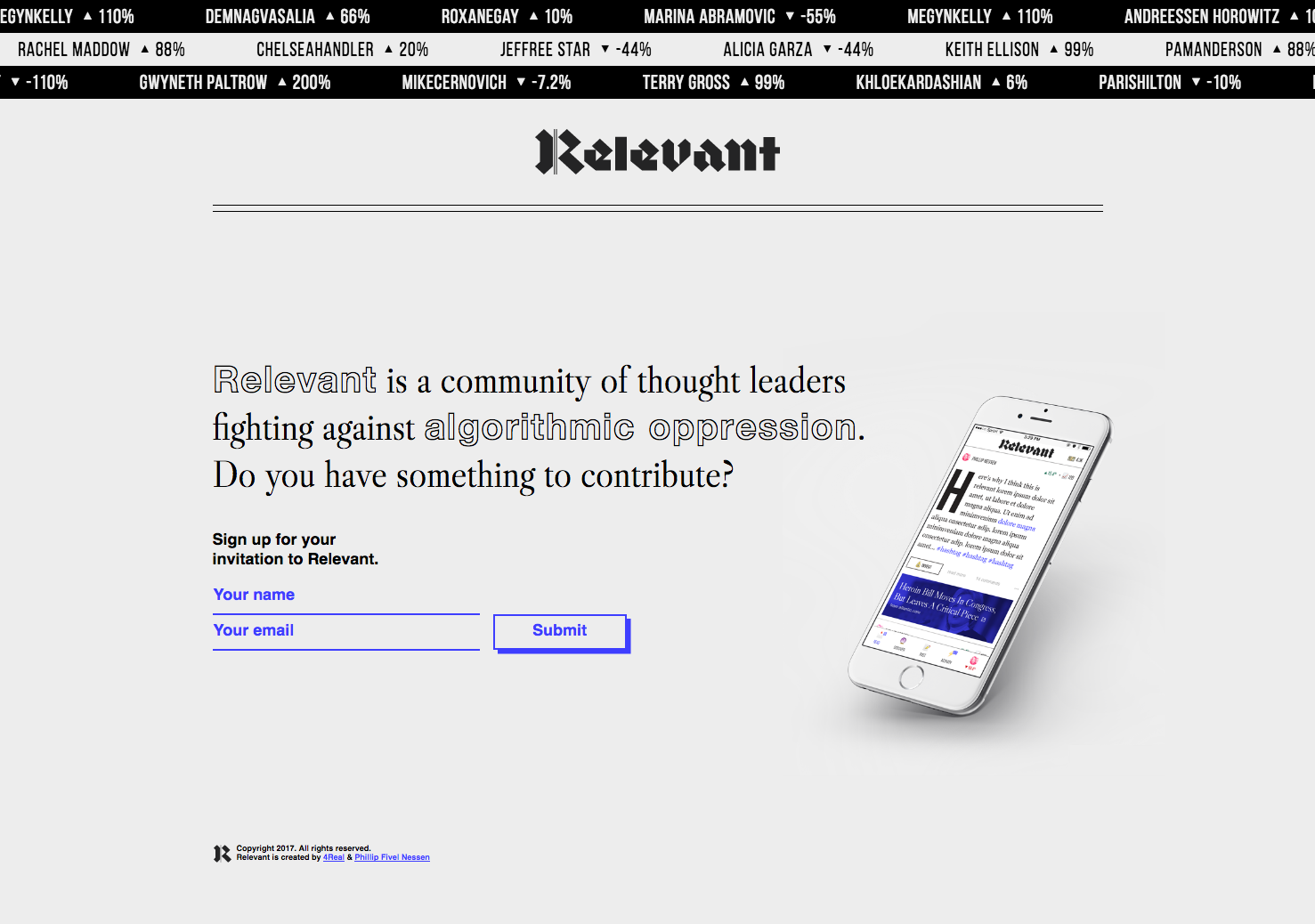 On February 5, 2017, German lawmakers unveiled a bill that would make fake news illegal. But before post-truth was named 2016’s word of the year and counterfeit news articles came to dominate real headlines—from teens in Macedonia publishing spurious articles about Donald Trump to Kremlin trolls spreading disinformation via social media—the New York-based digital agency 4REAL was already contriving canny confusion. The agency, founded by artists Analisa Teachworth and Slava Balasanov, developed CloneZone, an easy-to-use tool which facilitates making a clone of an existing website. Released on April Fool’s Day in 2015, the tool offered a simple way to create and share fake articles, initially letting the user imitate the design of authoritative news sites like The New York Times or The New Yorker while adapting the text and images however they wanted, making possible clones that were convincing except for the URL which gave away their falsity. Now, two years later, 4REAL is launching Relevant, an app that responds to the problem of fake news by offering a tool to vet articles through community voting. 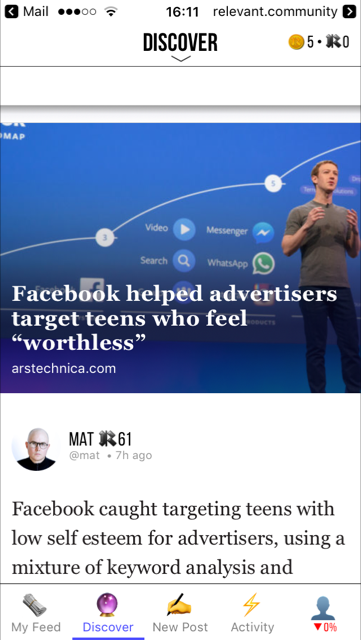 CloneZone, in many ways, drew attention to the ease at which fake news circulates unquestioned. In 2015, Teachworth and Balasanov kicked off their exploratory art project by posting a clone of a TechCrunch article (now offline) announcing that their start-up had been funded to the tune of $1.8 million. After sharing on Facebook and Twitter, the artists were shocked by how successful their hoax had been. “The fake article turned out to be way more believable than we were anticipated with likes and reposts rollin[g] in right away,” Balasanov wrote in a Medium post, later adding, “Whenever we go out to a social event we inevitably end up having to explain that no, we are not rolling in dough and can’t actually afford to buy a bottle of Cristal for everyone.”

While friends and acquaintances in 4REAL’s social network quickly appropriated the tool for their own hoaxes—for example, artist Nick DeMarco wrote a fake New Yorker article about Williamsburg scientologists and filmmaker Eugene Kotlyarenko penned faux press about his real film A Wonderful Cloud—CloneZone soon found a diversity of users from all around the world. An early controversy stemmed from a spurious article announcing rule changes for the fantasy game Magic the Gathering. 4REAL was slapped with several cease-and-desist orders, resulting in the agency taking down offending content and adapting the tool so that certain websites (more than forty) are now off-limits for cloning, including newyorker.com, wizards.com, lemonade.fr, and thenewyorktimes.com.

New York Times web pages are blocked from cloning because of a fake article claiming that Elizabeth Warren had endorsed Bernie Sanders during the Democratic primaries. Authored by comedian Steven Phillips-Horst, the article, with quotes attributed to Warren, a California Senator, and Lena Dunham (lol), is arguably one of the more influential CloneZone hoaxes to date. It was published in the afternoon on April 29, 2016 and by that evening already boasted more than 50,000 views and 15,000 shares on Facebook. The New York Times even posted their own article addressing the disinformation.

With this hoax, CloneZone’s reach extended to the national political stage, where we’ve seen the extensive impact of fake news in recent months. 4REAL’s project precociously underscored the ease at which false information spreads online, disrupting stable notions of fact and fiction, at a moment when we are collectively coming to terms with how to define and regulate propaganda and free speech. CloneZone spotlighted a problem and now Relevant hopes to deliver a solution.