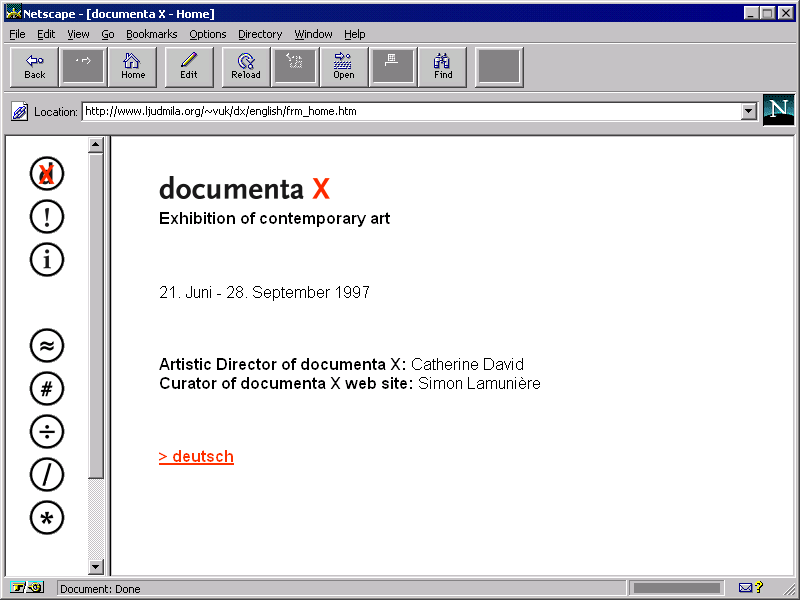 This essay accompanies the presentation of Vuk Ćosić's Documenta Done as a part of the online exhibition Net Art Anthology.

Documenta X, the 1997 iteration of the art exhibition held every five years in Kassel, Germany, was notable for multiple reasons. It was the first to be curated by a woman (the French curator Catherine David), it was critical of the market-based state of the art world and the institution of documenta itself, and it deployed the then-nascent technology of the internet—both as a platform for art and as a tool for public outreach. Embracing the decentralizing potential of the web, documenta’s substantial website served as an ancillary space for the event, linking online artworks to critical writing, message boards, web broadcasts of live events, and general visitor information for the exhibition. For David, this new platform was a means to broaden the theoretical and participatory scope of documenta. “Of the concentric circles which constitute the cultural event documenta X,” she writes, “the website is...the outermost ring. It allows participation in the event Kassel in the combination which distinguishes the internet: within a framework both intimate and global, in one’s own living room and in the most varied corners of our world.”1

Documenta X (dX) included early net artists Heath Bunting and Jodi.org, media art giant Antoni Muntadas, and a number of other artists such as Martin Kippenberger, Matt Mullican, Johan Grimonprez, and Jordan Crandall & Marek Walczak. It also formed a satellite space called “Hybrid WorkSpace.” Developed in partnership with the first Berlin Biennale and organized by net art pioneers Geert Lovink and Pit Shultz, WorkSpace, held in Kassel’s Orangerie, connected events of dX (in particular a program called 100 days - 100 guests) to groups connected to the Nettime community, including UK magazine Mute and the cyberfeminist activists Old Boys Network. In hindsight, dX represents a significant attempt to represent the social and political activities of artists working in and around the internet within the broader frame of contemporary art discourse. But despite all this—the inclusion of internet art as a form of production, the stated goal to reach audiences in the comfort of their “living rooms,” and the inclusion of the discursive WorkSpace—dX’s embrace of the web was, and still is, widely viewed as a failure.

The reasons are manifold. The internet works were physically installed on computers in a staged office-like setting (in a room designed by Austrian artists Heimo Zobernig and Franz West) and set apart from the rest of the documenta exhibition (a reality which may or may not have had to do with the technical challenges of installing the network in 1997). Jodi (Joan Heemskerk and Dirk Paesmans) expressed frustration with the physical context for their work, writing “it gives a false group-label to artists [whose] only thing in common [was] their use of the net, and categorize[d] them, in opposition to the rest of the exhibit, by technique.”2 In her 2011 book Nettitudes: Let’s Talk Net Art, writer and critic Josephine Bosma describes the issues concisely:

The contradiction between the closed space of the net art exhibition and the lively environment of WorkSpace, in which half of the Nettime community and its periphery participated, made [the] exhibition seem like a kind of dead-end street, or a social vacuum, for net.art. The action was elsewhere: on the Net, and at WorkSpace, which personified the network. The documenta curators did not understand the way that net art is, like art in public space, more deeply embedded in a broader cultural context than simply some white cube.3

Perhaps more egregious than the fact that the internet works were physically disconnected from the larger exhibition space, was that they were also disconnected from the internet itself—connected only via a local area network. Not surprisingly, Jodi refused to adapt to the technical constraints and as a result, their work, composed of external hyperlinks, crashed every time a user tried to interact with it. 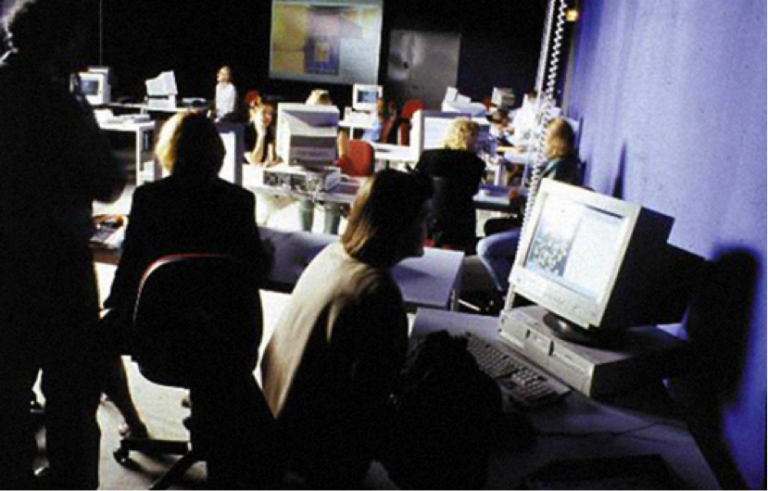 The most notorious “failure” of dX, however, was the fact that at the end of the exhibition the entire website was taken offline, and then packaged and sold as a CD-ROM. It was an act that prompted outrage from the net art community and inspired one of the best-known works of net art—Vuk Ćosić’s Documenta Done. Before the site was taken down, the Slovenian net artist Ćosić cloned it in its entirety, reinstalled it on his own server, and announced its rebirth with an official sounding press release. Ćosić, an instigator in the early net.art scene, gained wide notoriety as a result of this simple “copy and paste” gesture.

Born in Yugoslavia, Ćosić’s art practice emerged from a confluence of post-war Balkan politics and a network-inspired disruptive ethos. His work on the web, as well as his work with ASCII as a visual medium, underscores his concerns about visual culture and the role of art within a new technological contexts. And although Ćosić is most-often referred to within the context of the more anti-establishment and “heroic period” of net art, he has always been reluctant to frame his work as explicitly political or anti-art world. In an interview with Josephine Bosma in 2006 he ambiguously frames his politics saying,  “I like to believe that art is useless. It liberates me from all these worries.”4 In this sense, Documenta Done reads simply as an indictment of art world uselessness, but also more politically, as a statement about the about the impossibility of control and ownership in the dawning age of the world wide web.

The danger of Documenta Done is that it is read only as a prank, a one liner about that time that silly art world curators made a CD-ROM of a website. But the narrative of institutional failure is only one element of Documenta Done’s longevity. With its intact links to artist projects, message boards, and Kassel visitor information, Ćosić’s site, hosted on a Slovenian server, was the only online evidence of dX for close to twenty years. Since its creation, Ćosić has exhibited Documenta Done many times and in many iterations—although as each year passes, fewer and fewer of the original links are functional. Documenta Done continues to be one of the most often cited artworks of the iconoclastic net.art period, but it also functions in an unexpected way. By staying “live” it has functioned as an institutional archive for the establishment art world. It represents documenta’s institutional history and allows us to reconsider dX’s infamous failure. To further complicate this relationship, documenta has recently made the dX site “live” once again, and so now, two decades after the fact, there are two versions—one original and one copy. Determining which one is which however adds a new layer of inquiry to Documenta Done’s timeline.

In his essay Art Workers: Between Utopia and the Archive, Boris Groys considers, via Walter Benjamin, the ceaselessly mutating relations between the original and the copy. While Benjamin destroys the original, and with it the artwork’s aura, Groys argues that the internet has enabled a rebirth of the aura through the creation of multiple originals. “Here the aura of originality is not lost, but instead substituted by a different aura,” he writes, adding “on the internet, the circulation of digital data produces not copies, but new originals.” Although clones, Documenta Done at http://www.ljudmila.org/~vuk/dx/ and dX at http://www.documenta12.de/archiv/dx/ are two very different originals, with their own metadata and most essentially their own location on the network. Documenta X at documenta.de represents an event and an institutional history, whereas Documenta Done, represents the ways artists were actually using the web and their networks to critique traditional artwork structures and address issues of access, intellectual property and public space. Ćosić’s work, with its explicit intent to expose the futility of originality in the internet age, in relation to its administrative clone, takes on an uncomfortable sense of aura. The aura of the historically significant art object and the avant garde it represents.