The Valley and the Predator
By Ingrid Burrington 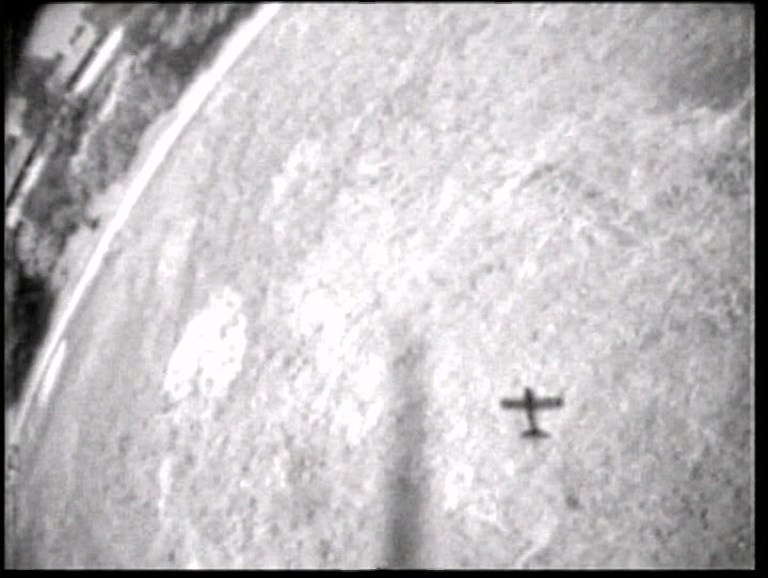 This article accompanies the presentation of the Bureau of Inverse Technology's BIT Plane as a part of the online exhibition Net Art Anthology.

Under the auspices of the anonymous collaborative the Bureau of Inverse Technology (BIT), Natalie Jeremijenko and Kate Rich created BIT Plane in 1997, shortly after NATO and the U.S Air Force flew the first Predator surveillance drones over Bosnia and Kosovo. Jeremijenko and Rich’s radio-controlled, video-enabled model airplane (a precursor to now-familiar consumer-grade drones) surveilled radically different landscapes than its Predator predecessor, but its very existence was indebted to much of the same government research and development that made military UAVs possible.

In the twenty years since BIT Plane launched, unmanned aerial technology—and aerial imaging captured by drones—has become commonplace to the point of being considered cultural heritage. Today, there are six drones on display at the Smithsonian National Air and Space Museum, including one of those Predator drones that once flew surveillance missions over the Balkans. When the Smithsonian opened its exhibit of military unmanned aerial vehicles in 2008, it coincided with the opening of In Plane View: Abstractions of Flight, a small abstract photography show. In a press release, Air and Space Museum director General J.R. Dailey expressed hope that this exhibition pairing would "suggest parallels between technology, culture, and the arts." In Plane View hung on the first floor beneath the UAVs, which today remain suspended at the mezzanine-level on the far west end of the museum.

The impulse to pair a technology associated with automated extralegal killing of American citizens alongside "culture and the arts" is weird, but not entirely surprising—the vantage point of drones affords a particular aesthetic in addition to plausible deniability. The aerial perspective has appealed to artists for as long as it has appealed to generals and kings. That distant, presumed-objective view from nowhere, whether achieved via hot air balloon or low-orbit satellite, suggests a totality, a kind of coherence in defiance of the often-incoherent groundtruth of everyday life. For generals, coherence offers the possibility of tactical advantage. For artists (or at least good artists), it's something to interrogate and take apart.

As a project dedicated to investigating the often-obscured politics of technology, BIT was less concerned with coherence and more with access—both expanding then-limited civilian access to aerial imagery and challenging the inaccessibility of corporate technology geographies. Jeremijenko and Rich flew BIT Plane over Silicon Valley tech campuses, in response to strict policies against photography inside tech offices. Documentation of the project initially appeared on the BIT website with stills of footage captured by the plane and a video compilation of the Silicon Valley sorties. The video of grainy, black and white footage of parking lots, office buildings, and highways features interstitial captions that range in tone from the technocratic authority of a defense briefing (“Unit retrieval was accurately effected after plotting plane's final trajectory and crash location from recorded video transmissions”) to acerbic recitations of a work culture that could be attributed to either military service or a Silicon Valley startup (“THERE WAS A SENSE OF BEING NOT PART OF A COMPANY BUT BEING PART OF A CAUSE OR CRUSADE”).

In addition to transgressing corporate policy, BIT Plane transgressed government airspace. As noted in BIT's Decade Report, "it is illegal to fly RC aircraft within 5 miles of an airport (there were 3 airports within 5 miles of the bitplane flight path including Moffat [sic] Field, a Lockheed Martin and NASA jointly operated military airfield). It is also not permitted to fly model planes in the Palo Alto area due to city ordinances on noise pollution." (Silicon Valley remains a no-fly zone today, although that apparently didn't stop Facebook from using a drone to document its new Frank Gehry-designed compound.)

BIT Plane also sought to document some of the landscapes that made the technology behind the drone possible. "Silicon Valley" in today's cultural imagination has become less identified with a geography and more with an ideological condition devouring all that has come before it, including history. And as that once-uniquely Californian Ideology perpetuates across continents and markets, its origins in military aerospace and surveillance recede further from public memory. In 1960, the Air Force Satellite Test Center (later renamed Onizuka Air Force Station) was established at Sunnyvale's Moffett Field Naval Air Station and became the birthplace of the CORONA spy satellite program. Lockheed Martin covertly worked on the project from the offices of helicopter manufacturer Hiller Aircraft's nonexistent "Advanced Projects" division.

Growing military and aerospace demand for digital computing, combined with developments like the 1951 creation of Stanford Industrial Park to lure engineering firms to the region, laid the foundation for Silicon Valley, from the CORONA program to the integrated circuit and the ARPAnet. Government and academic investment transformed the largely agricultural area into a major site for industrial electronics manufacturing and bucolic office parks designed to deny the existence of industry. (Today, tech campuses seem inclined to deny the existence of work itself, catering to an employee's every need such that they never leave the office.) The denial of government and military investment benefits the Silicon Valley of ideological construct, which insists that it’s unfettered, unregulated, untaxed “innovation” that builds the future, not long-term research and development. With each passing hype cycle, the "silicon" history of Silicon Valley—and the military and government funding behind it—fades, replaced by blithe libertarian faith in free markets and proprietary math.

But denial of (and a tendency to reenact) the past is kind of what California does best—a point that the BIT Plane video draws attention to with its opening narration from then-former (and now-current) California governor Jerry Brown. Brown notes that California was "a state of mind, right from the beginning," asserting (incorrectly) that the etymology of the state's name has been lost to history (it's thought to have come from a 16th-century Spanish appropriation of an Arabic word). Echoes of the 1849 Gold Rush permeated the 1959 semiconductor revolution and the 1999 dot-com era—yet it was mostly the thrilling possibility of fortune that was remembered, not the speculative financial bubbles or tendency to perpetuate systemic inequality.

Of course, the two decades since BIT Plane's first sorties have included significant technological shifts. In 1997, the specification for wireless networking that would lead to wifi (and wifi-enabled drones) was in its infancy. The bitplane transmitted imagery via network TV broadcast frequencies—leading to yet another boundary transgression, this time interrupting regularly scheduled programming on televisions of households below with images of those very households as viewed from the air.

Meanwhile, several of the companies that BIT Plane surveilled have relocated, no longer exist, or are barely hanging on. Google now inhabits what in 1997 was the home of Silicon Graphics, and Facebook acquired the Sun Microsystems compound in 2011. Advanced Micro Devices, Netscape, and Interval Research have all disappeared. It's unclear what will become of the Yahoo offices next door to Lockheed Martin's Moffett Field complex.

But Lockheed endures. Defense contractors remain a significant (if less frequently discussed) influence on the geographic and political landscape of Silicon Valley. (The CIA-backed, Peter Thiel-co-founded defense contractor Palantir, for example, has quietly turned downtown Palo Alto into its de facto campus). And as the public internet is increasingly instrumentalized toward state surveillance, and platforms become indistinguishable from sovereigns, BIT Plane feels not merely prescient but present tense. The radio frequencies and company names may have changed, but the power dynamics of information asymmetry, blind faith in technological progress, and ambivalence at tech's military legacy persist.

Back at the Smithsonian's drone exhibition, a small video display installed on the mezzanine offers an inadvertent subversion of the exhibition's apolitical tone. In between video of the various drones on display maneuvering and taking off, there's some black-and-white Predator combat footage. It's rough and glitchy, flashing to almost-total white when a Hellfire missile hits its target before returning to a now-smoking landscape. There's no indication of where or when the footage was taken or whose deaths we might be watching. It's hard to ignore the aesthetic similarity between BIT Plane's grainy video footage and the Predator combat video, and baffling to think of both as historical artifacts and not pressing, immediate truths that several years on still demand some kind of reckoning.

In an interview with Bard's Center for the Study of the Drone, Jeremijenko noted that BIT Plane's aerial perspective didn't afford any greater insight on these companies. "What could you actually see? What information could you take from the plane? Of course, the answer is not much (as contemporary drones have so aptly demonstrated)—lots of images but not much actual trustable information." Tech campuses of Silicon Valley couldn't be further from the battlefields visualized by the Predator, but the technology behind the latter is deeply indebted to the often-ignored legacy of the former. As BIT Plane still demonstrates, neither the Valley nor the Predator offer a perspective that should necessarily be trusted, and both remain worthy subjects of critical interrogation by artists.