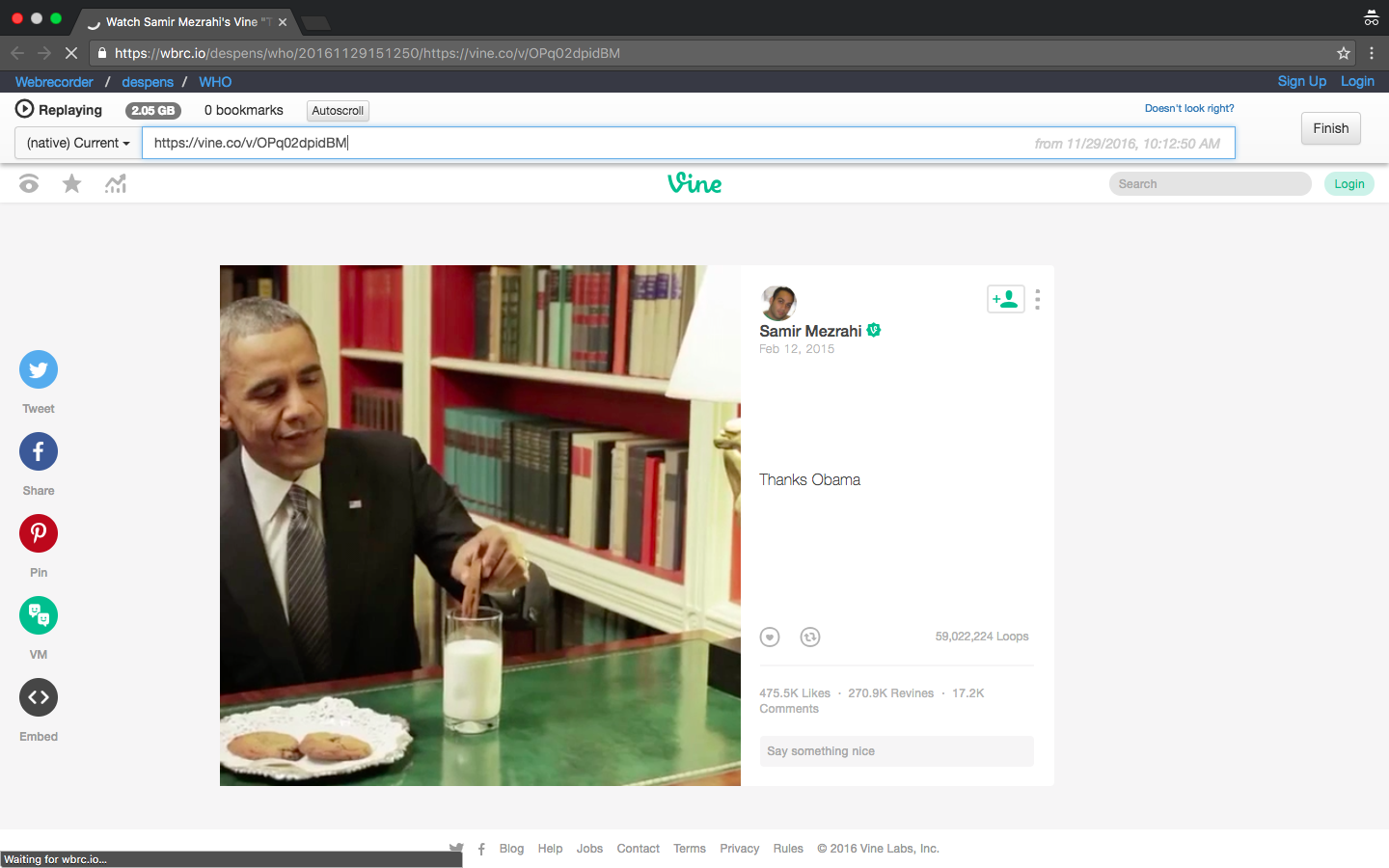 A typical transition period requires many handovers, but this year, one of these is an altogether new endeavor for a White House: turning the sitting President’s social media presence over to the new office holder. These Twitter, Instagram, Vine, Facebook, etc. accounts will be wiped and exported, some to archival accounts—for instance, Obama’s tweets will live on at @POTUS44—and some to a public data archive.

On the occasion of this first social media transition, the White House issued a public call to action, asking Americans to try their hand at breathing life into the huge amount of data that is President Obama's eight years of social media presence. We were thrilled to respond. (With others, too!) The data archive, vast and disparate as it is, is largely unintelligible; what we proposed was using our built in-house Webrecorder tool to give it some narrative shape, some animation and dynamism.

Dragan Espenschied, our preservation director—along with Aria Dean, assistant curator, and Kaela Noel, program coordinator—has crafted three narratives drawn from the Obama social media archive. Today, Webrecorder is very good at archiving and reperforming embedded and personalized web content, but for this presentation Dragan developed a custom, if relatively simple curatorial framework for the archived materials. (Consider it a preview of future narrative features in Webrecorder.)

Each of the archives tells a different story, highlighting interactions among the White House, the Obamas, and online publics. “Thanks Obama” explores the satirization of conservative disappointment with Obama, mapping the meme’s progression from its earnest right-wing origins all the way to its self-aware usage by Obama himself. “TD4W x FLOTUS” similarly tracks a meme, but in this case it’s Lil Jon and Michelle Obama’s inadvertent collaboration on the First Lady’s now-infamous "turnip for what" Vine. And finally, we archived responses to Obama’s #LoveWins tweet and the White House's Instagram post following the legalization of same-sex marriage.

Together, these dynamic archives show the ways in which the Obama presidency was embedded in the cultural sphere, influencing and being influenced by the music, humor, trends, and social media raucous that defined his time in office. They are also examples of how a curated web archive can clear a path through otherwise overwhelming data and really tell a story. Here, the story is "Barack Obama, our first 'social media president.'"

Rhizome would like to thank the Obama White House—and, in particular, Joshua Miller, Director of Product Management for the Office of Digital Strategy—for inviting us to help narrativize the President's social media legacy.