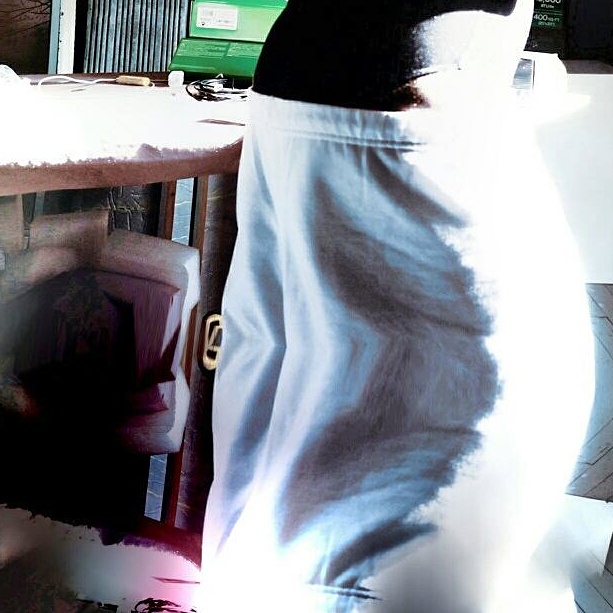 Artists discuss the politics and aesthetics of black portraiture after the internet. Published alongside the online exhibition First Look: New Black Portraitures, copresented by Rhizome and the New Museum. 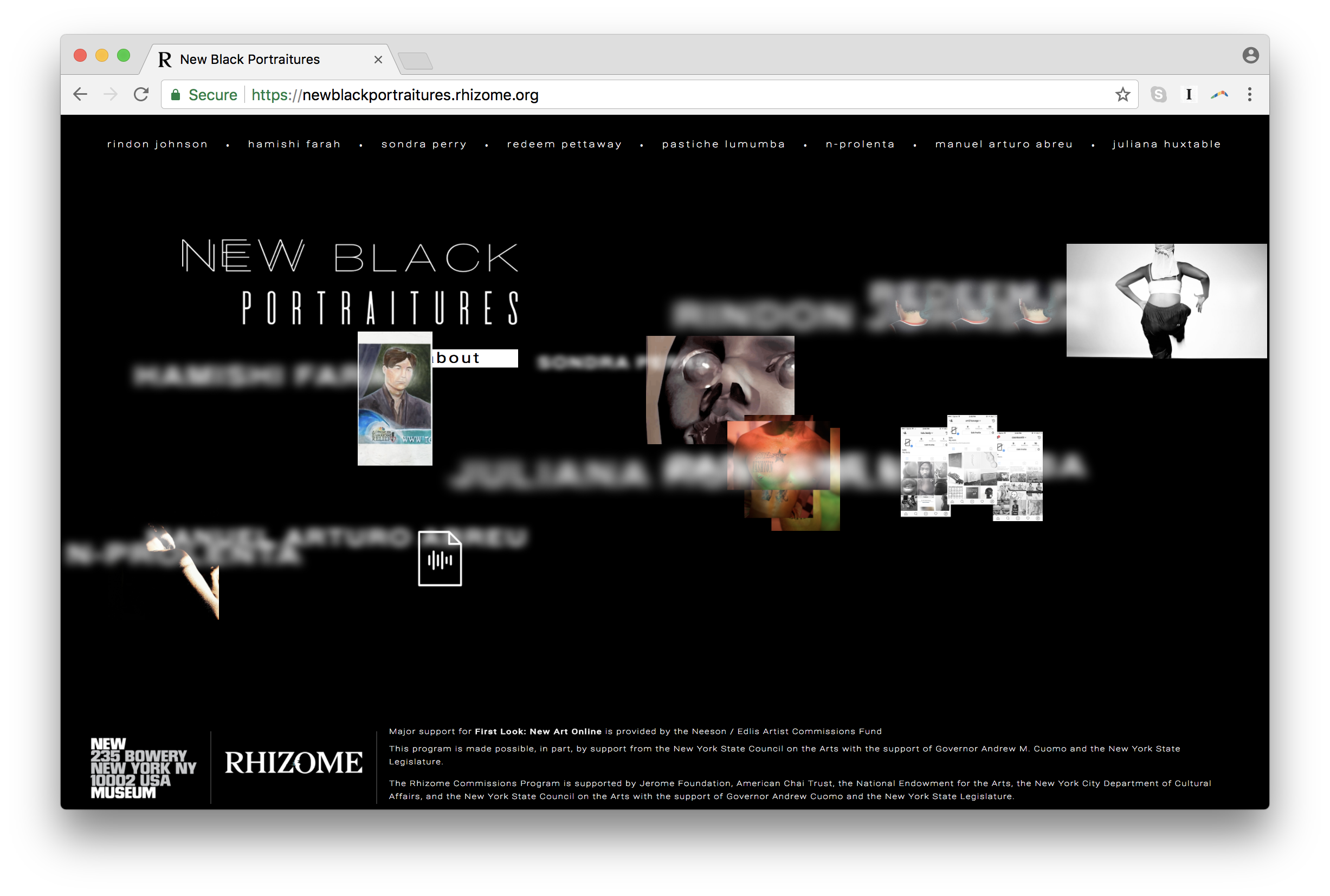 What is the future of the black image?

Pastiche Lumumba: The future of the black image is generative, autonomous, ephemeral.

Rindon Johnson: I can’t be sure. In relation to this idea of future, I have been thinking a lot recently about the entertainment value of blackness. Like this implication of mobility through entertainment, furthered by the using of things that might be considered stereotypically black to sell an idea about blackness or to sell something… How does the entertainer fit into this painful puzzle of systemic oppression manifest everywhere from the very language we speak to police killings. I’m going to guess that the future of the black image is directly related to the future of capitalism as the black american identity exists and is maintained by capitalism, like every other identity, I mean like everything else. So if capitalism is reoriented, what are we left with?

I was watching this house show recently like a reno build show and this renegade white architect painted the entire house black and in that classic reality tv way the producers really focused on it, this was “black interior guy” and of course you know the house comes out totally beautiful, just extraordinary, reflexive and incredible. They toured the house and kept saying how warm the black felt. Then he said this thing that was like, “I am not afraid of black” and I just had this flashback to Get Out where this old white guy tells the main character “Black is in!”, and I just thought “is this what is next for black?”

manuel arturo abreu: The white cube's lifelong denial of modernist violence, ongoing blackface, and the continued violent circulation of Black subjectivities separate from Black people means the future of the Black image is similar to its past -- non-image (or not totally image), fugitive, caught between abstraction and figuration, between being inherently networked and inherently phantasmic. The most important work will happen and has always happened outside the confines of a notion like 'art' or 'image.'

N-Prolenta: There's a point of maximum density and minimum complexity, where things are so hot that they feel cold. We're doing more of that. And it's more of a condition than a direction. Can there ever be a true future in that, as it is? I find that Black images often deal in multiplicities, and across striations. There will be more tension, and we will witness the dramas coming from that. 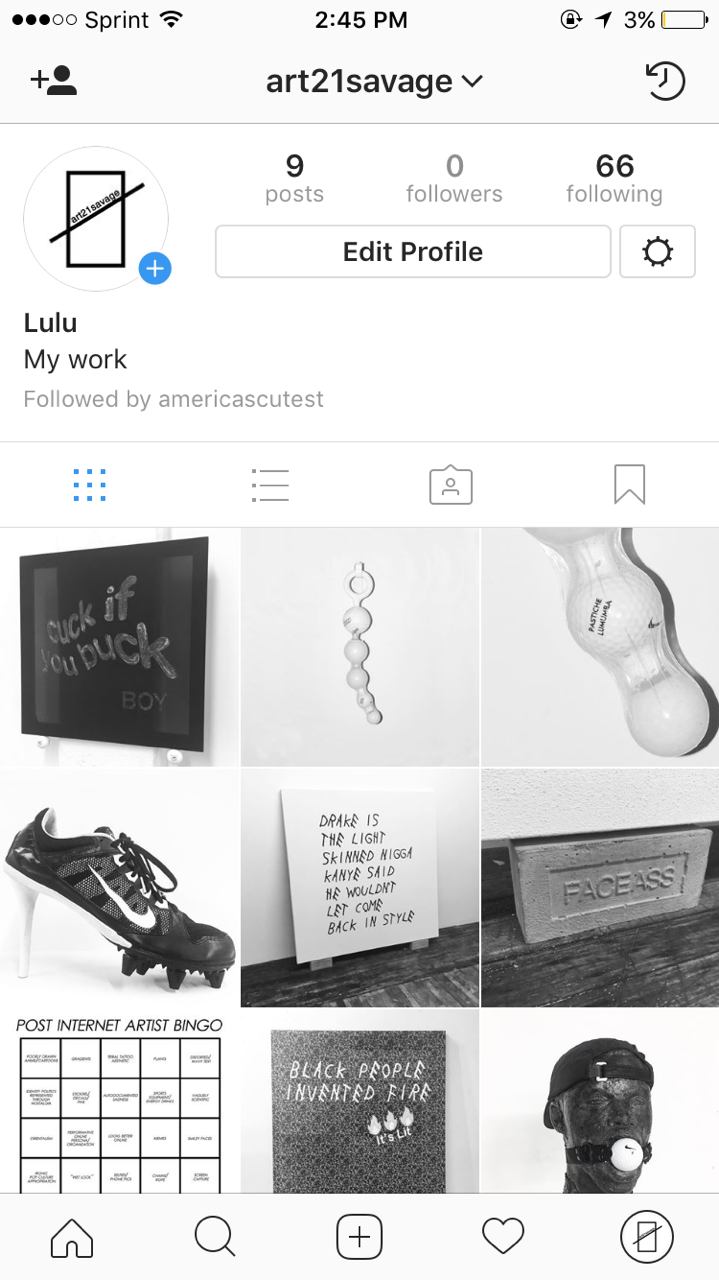 Aria Dean: In this moment, culturally and aesthetically, how do you feel black portraiture is situated? I’m thinking about the art world as one specific world of image, but also in the public sphere at large - online and off.

Pastiche Lumumba: Black portraiture is situated editorially and in archives as an educational tool to prove that we exist and are indeed human. For black people, at this moment, portraiture allows us to revel in the joy and beauty of being black, in ourselves and each other, at irl and on the internet.

Rindon Johnson: I’m from California and the way that voting works there is that there are propositions for bills and laws etc. With propositions you vote yes or no. Sometimes a proposition can be worded in such a way that it will trick people to say yes to something that they would normally say no to. Meanwhile, I came to the realization the other day that a painting is proposition for a plane. Sometimes I wonder if American Blackness is the amalgam of these 2 types of propositions, a sort of grouping together of propositions, a tying together of people who are stratified by class, location, beliefs. The Black American proposition is slippery and we are all in weird ways saying yes or no to one part or another part of one proposition or another proposition. When I try and put the idea all the way through its paces I ask: Is American Blackness a proposition for a people? Since the proposition does not exist in a vacuum, power is still distributed based around education, class, access etc. So, can’t those that have the means to assume more control over the proposition, take it as their own exploit it for some kind of gain? What does that exploitation look like? What do we say about all of that? I guess none of that answers the question. It seems like black portraiture is benefiting from new outlets but is still fighting the same usual demons.

manuel arturo abreu: It's likely situated in a lesser position in relation to selfies, which are easier to circulate and extract value from. A platform like IG would be much less profitable without the daily outpour of selfies from Black women in particular and Black folks in general. I imagine “portrait” generally is now taken to mean a page orientation where the page is taller than it is wide (vs landscape). Does the conversation regarding payment for Black selfie labor involve the portrait vs selfie tension?

N-Prolenta: We're saturated in it. 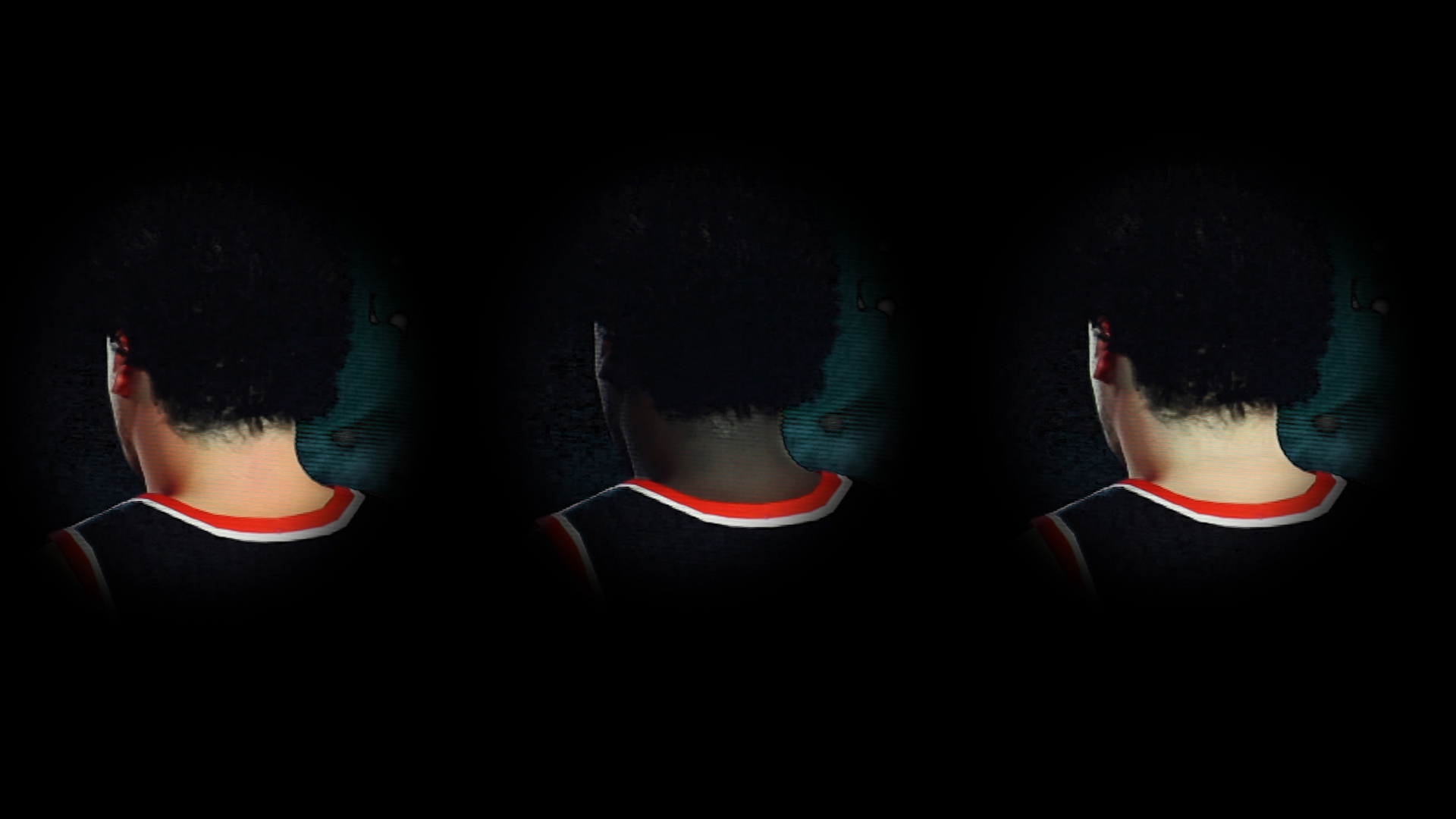 Aria Dean: How does your practice relate to the rich history of black artists exploring portraiture and representation, using the black figurative image? Do you consider yourself an inheritor of this tradition? Do you feel any tension or opposition?

Pastiche Lumumba: My practice relates specifically with how black artists, black people are exploring our representation on the internet. My identity as one whole being with a diverse array of thoughts and feelings and ways of presenting them and myself is subject to the rules of any site in which it exists. This generation of artists and black people inherited sensibilities but are using them to navigate an entirely different information landscape. I feel that tension most acutely when I want to show internet artists in physical gallery spaces. A lot is lost when we translate digital practices into traditional physical presentations for exhibition purposes.

Rindon Johnson: My mother is an art dealer and in my teens she started showing Roy DeCarava, James VanDerZee and Gordon Parks all three dealing very particularly, and differently in black portraiture. I got to spend a lot of time with these images because the gallery is a family business, so I know their lines and angles by heart. Then I went to NYU and studied with Dr. Deborah Willis who, in addition to her own gorgeous images, has created some of the most magnificent and thorough archives in book form of black lives. As I get more into other mediums, I got really into Julie Dash, Howardina Pindell, Sun Ra, Barbara McCullough, Elizabeth Catlett and Senga Negundi, among others. All these deep dives into other people’s work they’re all related somehow to my work, and I inherit them happily, and I think any tension or opposition is maybe just a necessary act of questioning.

manuel arturo abreu: I don't make figurative work, but I find it quite beautiful -- recent figuration by Cheyenne Julien, Eden Seifu, Simphiwe Ndzube, Hamishi Farah, and many others has touched me and shows that this rich history of Black representational work lives on. 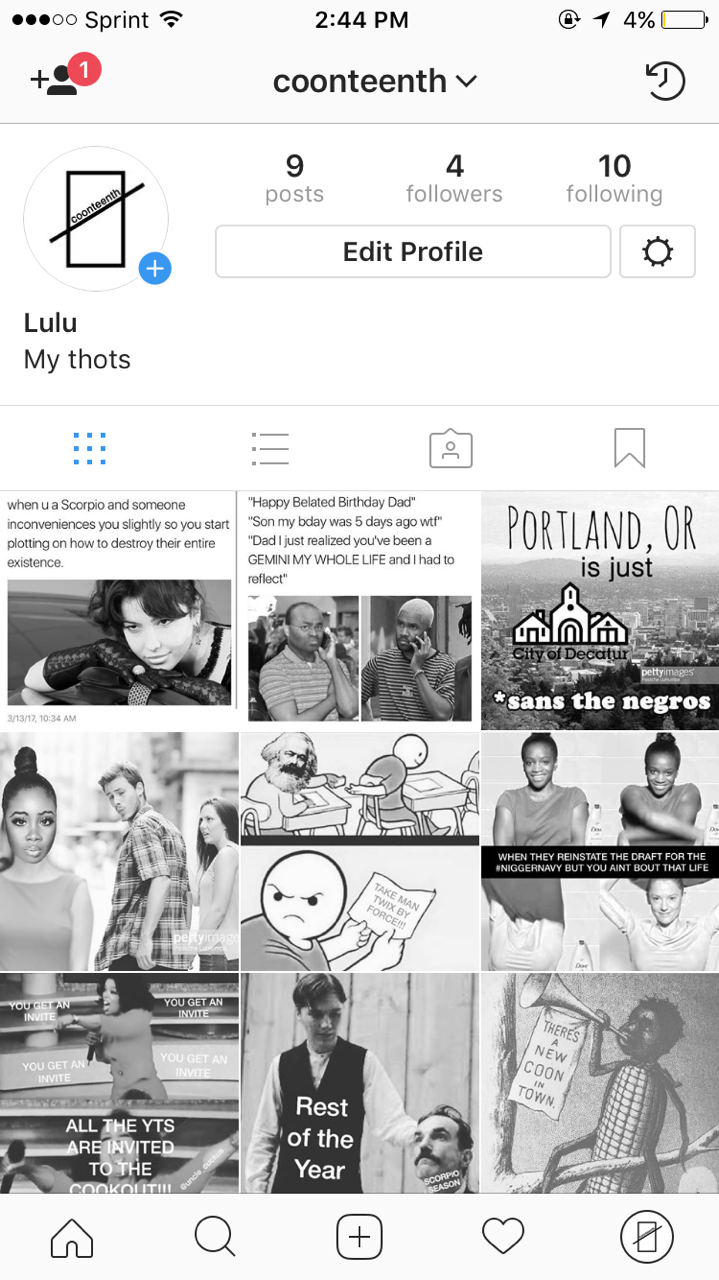 Pastiche Lumumba: Images have never been true, not even mine.

Rindon Johnson: Well today it was raining but lightly.  Walking home I noticed that there was a puddle of milk on the street perfectly nestled into a shallow amoeba hole in the sidewalk. As I got closer the light moved and the milk somehow turned to water. I suppose the milk was always water but if I first saw it as milk was it not also milk?

manuel arturo abreu: No, they just are (and to some, even that is up for debate, somehow). That whole BS of art “lying like the truth” is another means of concealing its market operation. Somewhere between a social constructivist position where images are mirrors of the world that makes them, and the Stravinsky position that art is powerless to represent anything but itself, is where we'll find an accurate understanding of how images function in relation to truth... maybe.

N-Prolenta: Yes, if you're asking questions.