Growing Up Google: An Interview with Martine Syms
By Aria Dean 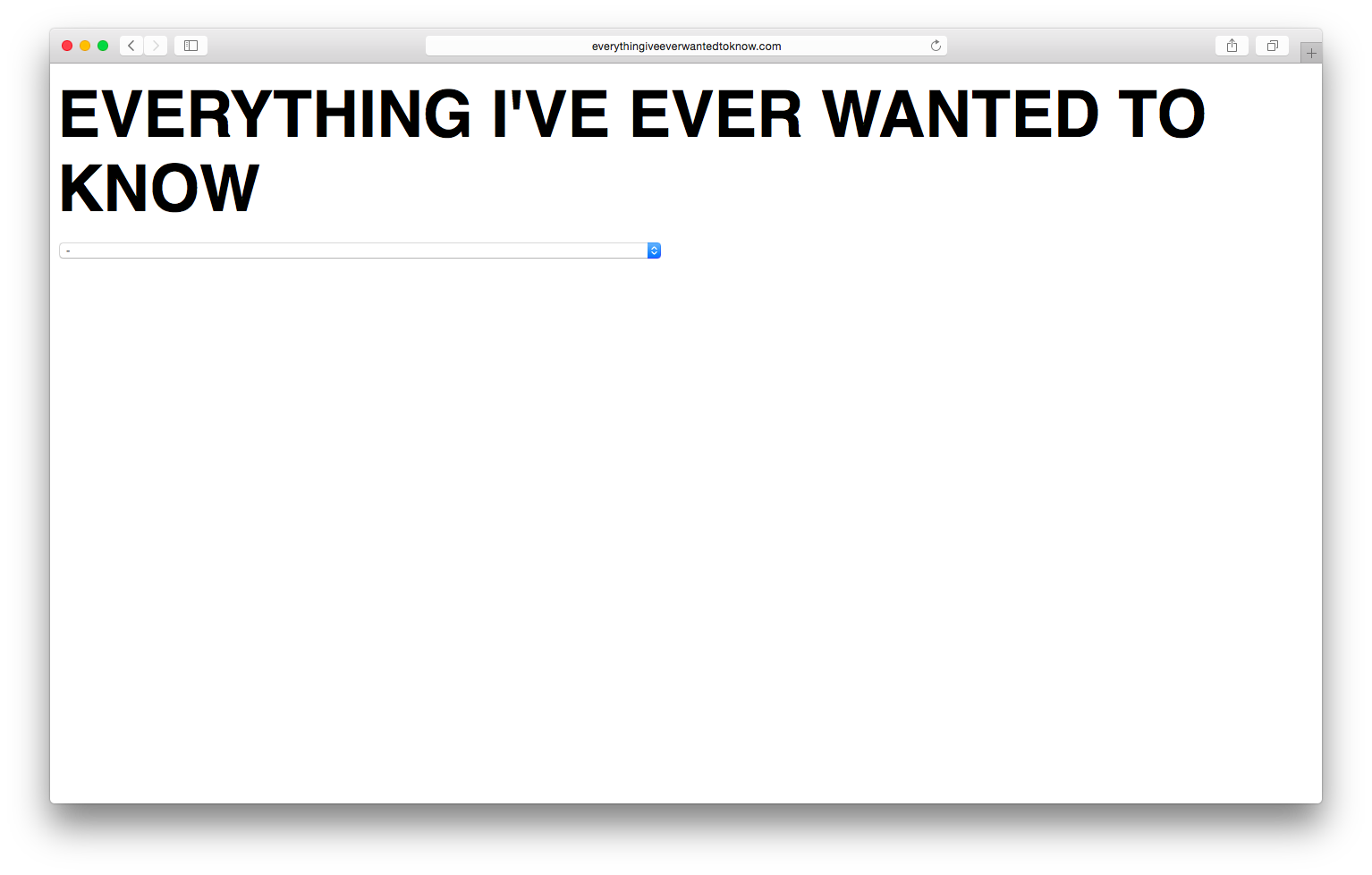 This interview accompanies the presentation of EverythingIveEverWantedtoKnow.com as part of the online exhibition Net Art Anthology.

AD: Can you start by walking me through the project more generally? What was the impetus for it? The process?

MS: EverythingIveAlwaysWantedtoKnow.com was kind of my thesis project at School of the Art Institute in Chicago. I was interested in automatic writing, writing under constraints, very influenced by OuLiPo. I was using found language to think about American ideologies. So I had been collecting all of my Google searches for two or three years–there was no saved search at the time. I was doing in a document as I was in school, as a kind of a diary. I liked the idea of coming of age and “persona.” I wanted to explore the the creation of a persona as well through this coming of age story. I wondered if I could do it through what I was searching on Google, what, or who, would it reveal?

I wanted it to be a very simple presentation only using a few lines of codes. There’s nothing to it; it’s just a drop-down menu. I didn't want the terms to link anywhere. I made it so that if anything was selected, it would go back to the index. This was a kind of refusal. You could see what I was interested in, but you wouldn't get to see anything more.

AD: Looking back on the work today, it definitely seems to relate to the way people's subjectivities are arranged online. Maybe it wasn't as glaringly the case back then in 2007, but consciously or not it seems to foreshadow the way that search queries and consumer patterns are purported to actually make up who you are. Were you thinking about that at the time?

MS: This was 2007. I was interested in how little this data actually said. You can infer some things from it: there's a lot of stuff about me trying to break a lease, for instance. I was searching tons and tons of stuff like:  “tenant's rights organization,” “breaking lease,” “how to get out of lease in Chicago.”

I was always thinking about it more about the way I was talking to search engines, rather than looking at what was actually going on in my life. Today, I often get coded incorrectly in advertising stuff because of Twitter. I recently downloaded my Twitter data and because I tweet about sports, cars, and business a lot, it thinks that I'm an affluent white man. I'm interested in that mis-reading. There's some stuff I'm searching that is coded in other ways. There’s a lot of stuff about art, being a young artist, then there's also a lot of stuff that's about being a young black woman.

So in EverythingIveEverWantedtoKnow.com I was interested in how these multiple subjectivities were rendered and kind of flattened out through the search query itself.

AD: How do you think that this work and your early internet-based work informs the work that you’ve made in more recent years? Have your concerns shifted? Do you have any comments on the relationship between the old work and the new work?

MS: I see a lot of parallels. There are a lot of similarities in terms of both what I'm thinking about and how. Maybe what's become pronounced is my interest in creating an identity–how you're formed by external forces, and the performance that’s tied to that. Because at first I was writing down what I was doing, but then once I knew that I was going to write it down, there was this hesitation “should I search that?” I committed to putting down everything I search. So if I search something weird, people are gonna like know this about me or think this about me. At that time a few people actually did say, “oh your searches are so tame.”

I like the idea of how this type of publicness, which is really private in one sense–you know these boundaries in being what’s public and what’s private are blurred online and how that becomes really performative. I’ve always thought about the internet as a cinematic space, but I think the increase of online video in advertising, social media, and as entertainment makes this very apparent.