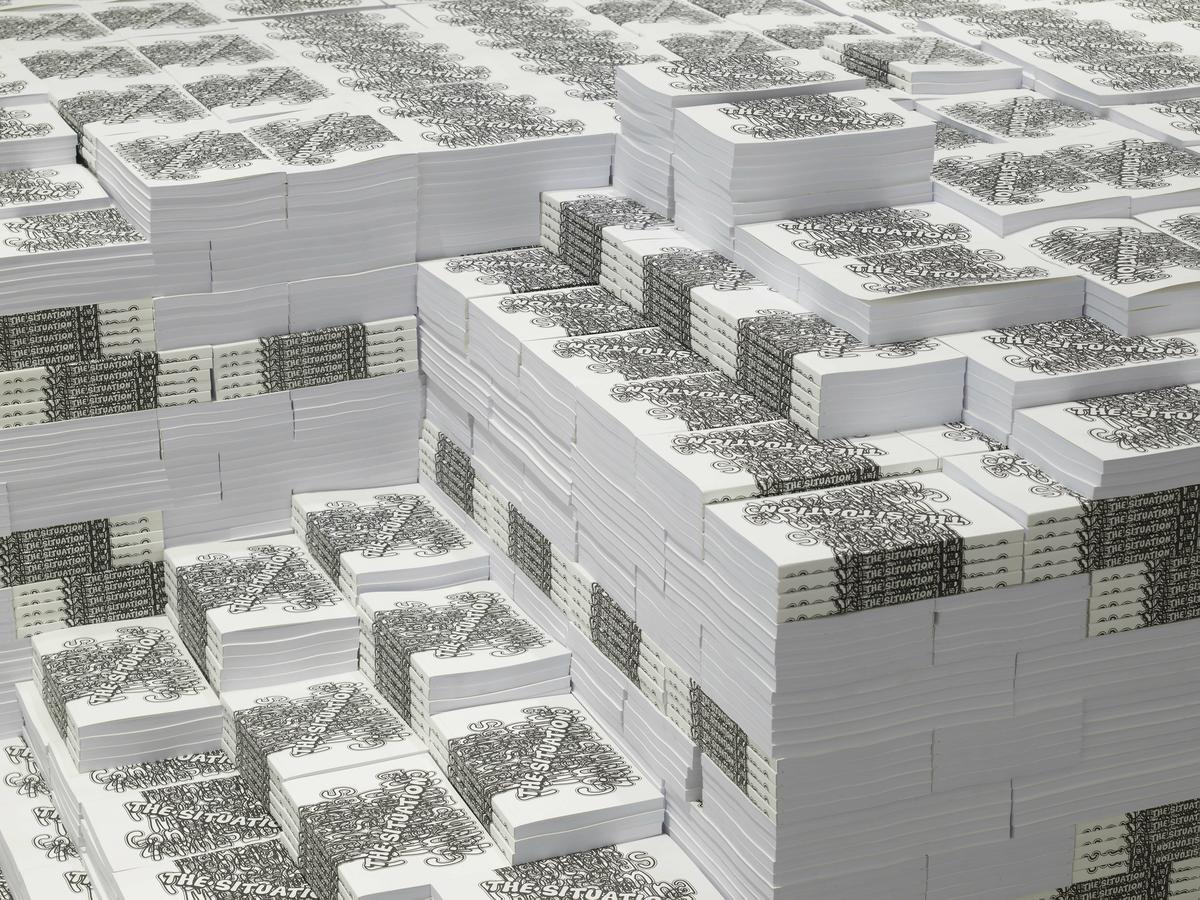 Be careful not to step on the tiny ceramic sculptures, they are on the floor and at times partially obscured by the shredded paper.

This, along with the unspoken tacit permission to steal books, were the viewing instructions given for Hannah Black’s “Some Context” at Chisenhale Gallery in London. The books stacked in the center of the room provide the bulk of the exhibition’s content, both materially and conceptually. They exist individually as books able to be read on their own, and collectively as a stacked sculpture. They were also presented in shredded form as filler, both covering the floor of the gallery, almost concealing the small ceramic sculptures as noted above, while also filling, or waiting to fill, the teddy bears strewn about or propped up next to the paper shredders. Perhaps more acutely, these books exist as a potentiality; they await to be read or to be shredded, or photographed or stolen. But “Some Context” was not an exhibition with an accompanying book; the book itself, in its myriad of real and potential forms, is the artwork. Its “content” is comprised of conceptions of several social selves: that of Black herself, as well as those of the book’s various contributors. The book’s authors are only listed once in the table of contents. Some are obscured completely and thus their texts remain anonymous. By redacting the names and disrupting the ability for the reader to easily locate each author’s name to their corresponding text, Black provided different terms for speaking. In some cases, she perhaps made space for freer voices, as the author could feel more open, without their every word traceable back to them. Here, the ideas on offer in the show began to meld and activate for the viewer. 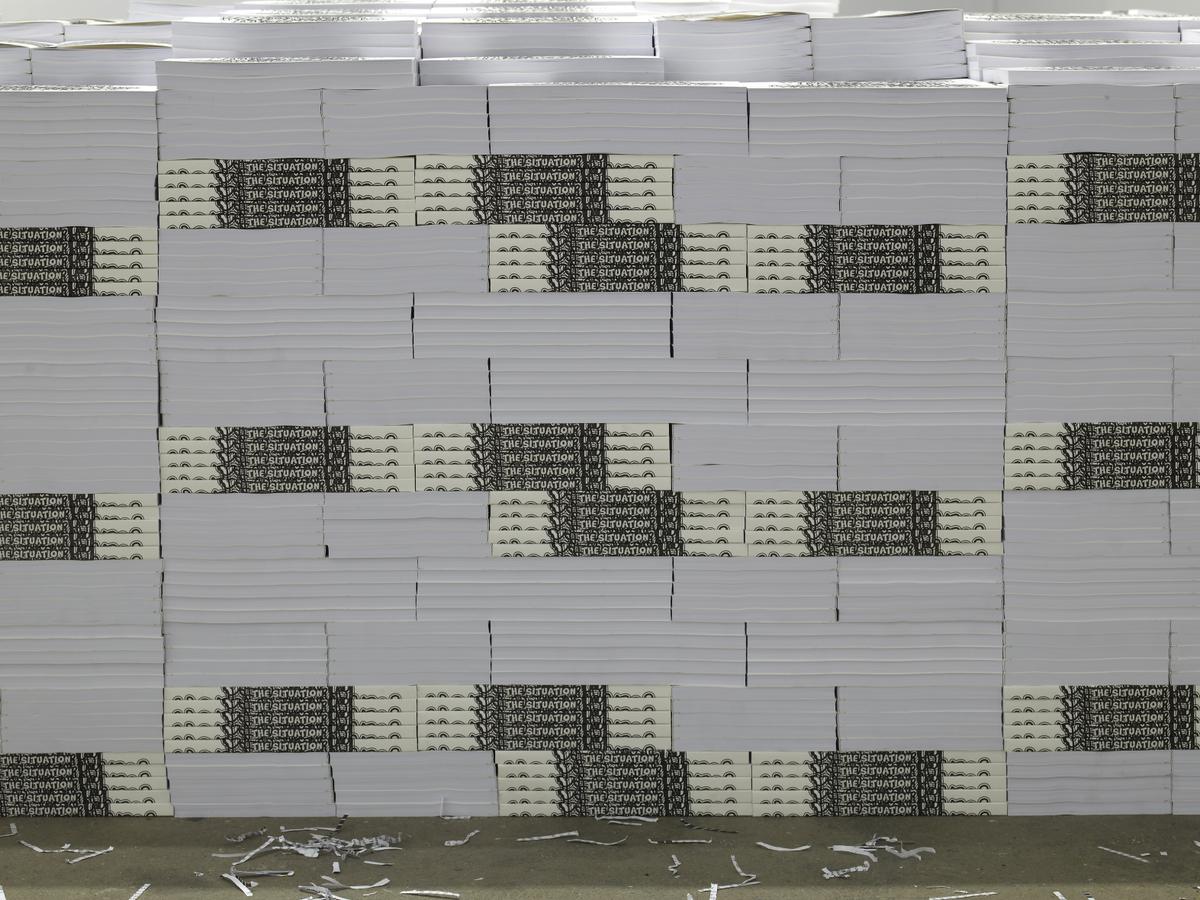 This exhibition seems appropriate and timely following Black’s Open Letter to the Whitney . It provides a space for discussion by framing ideas from the artist herself as well as those from the invited participants. Additionally, the work seems to respond to the immediate aftermath of the Open Letter’s circulation, where it seemed that the discussion of Black as a person overshadowed the articulation of her artistic and written work. In effect, she seemed to become the position she (and all of the accompanying signatories) advocated for in the letter. It is this very ontology of “being content” that the show seems to both unpack and complicate, where the written voices and the contributors to the lecture program were both the content and form. Michel Feher in “Self-Appreciation; or, The Aspirations of Human Capital,” discusses this process through which the productivity of a person living within neoliberalism is not only measured through their labor but also gauged by what they say or do, stand for, look like, and dream about.1 Together, these elements become their unique selling proposition, their USP, providing a surplus or deficit commodity value. He refers to this as one’s human capital , writing that “the things that I inherit, the things that happen to me, and the things I do all contribute to the maintenance or the deterioration of my human capital […] my human capital is me, as a set of skills and capabilities that is modified by all that affects me and all that I effect.”

You can’t lean on the white walls, you’ll leave smudges.

This was the instruction given to me by the museum guard when I leaned for too long against the wall in “Small Room,” Black’s recent show at Mumok. A sheet of Perspex secured copies of Life, a book by Black and Juliana Huxtable published adjacent to the exhibition (not a central work to it, like The Situation would be) onto the wall, installed after the opening to prevent the remaining copies from being stolen. There are conceptual threads to follow from “Small Room” into “Some Context.” The work of “Small Room” explored cells, and by extension, thresholds: the outer ring, the edge, the absolutely impermeable or at times semi-permeable membrane that separates a thing from everything it is not. The viewer was asked to consider w hat is contained within and what constitutes separation, by the wall, the fence, the shackle.

If we follow this cellular logic into “Some Context,” here too we can find some semi-permeable edges and barriers. The covers of The Situation hold a collection of voices, contained within the skin and bodies of the contributors that keeps all of themselves contained, defining their positions against being part of everything else in the world. The “situation” articulated in the book and in the exhibition seems to reference the predetermined limits of the subjectivized self. “Subjectivized” here refers to the state after one becomes a subject, after an external force deems you a subject within a Foucauldian power relation. From this situation of being subjectivized, it is difficult to speak or make from outside the position you are registered as, and thus expected to inhabit. The self, like the book, is the vessel which holds our content, just as the teddy bear pelts hold their shredded filling. 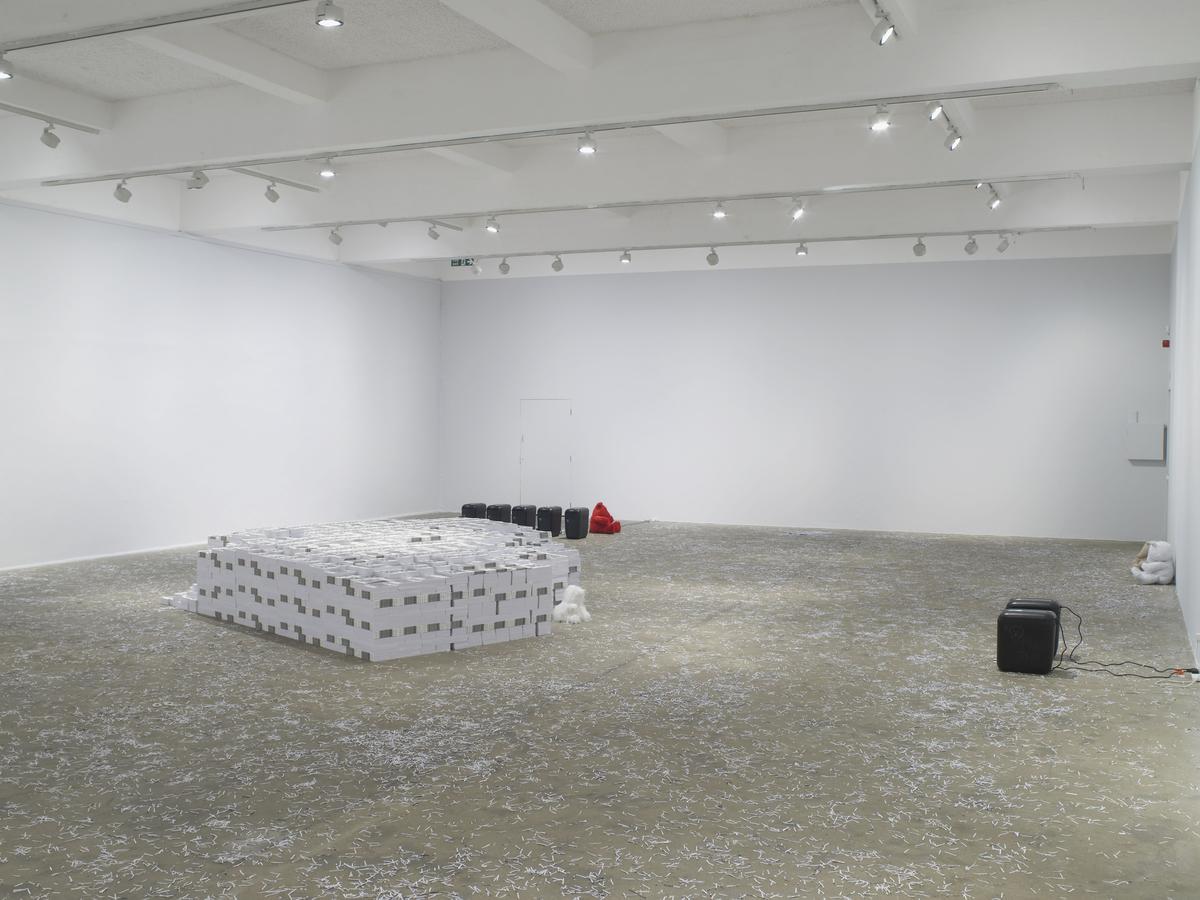 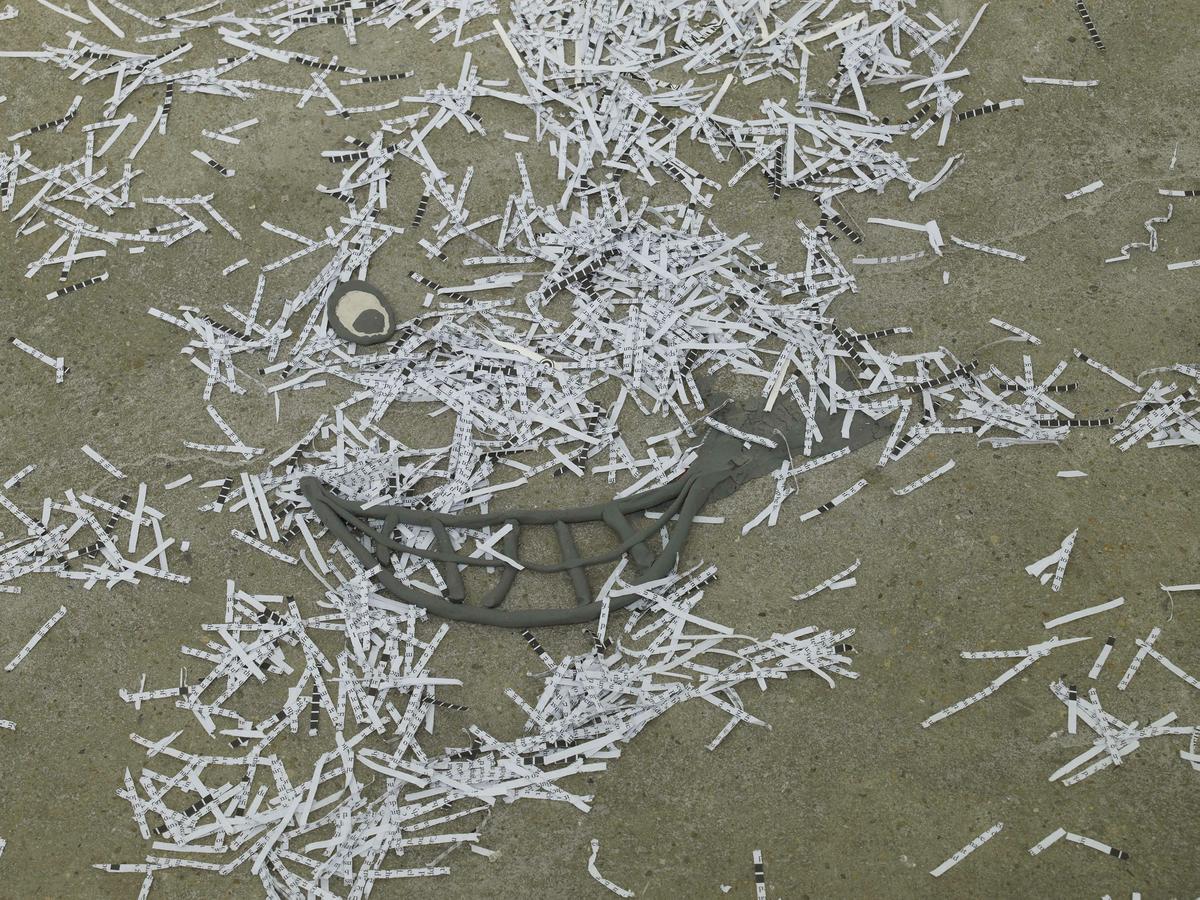 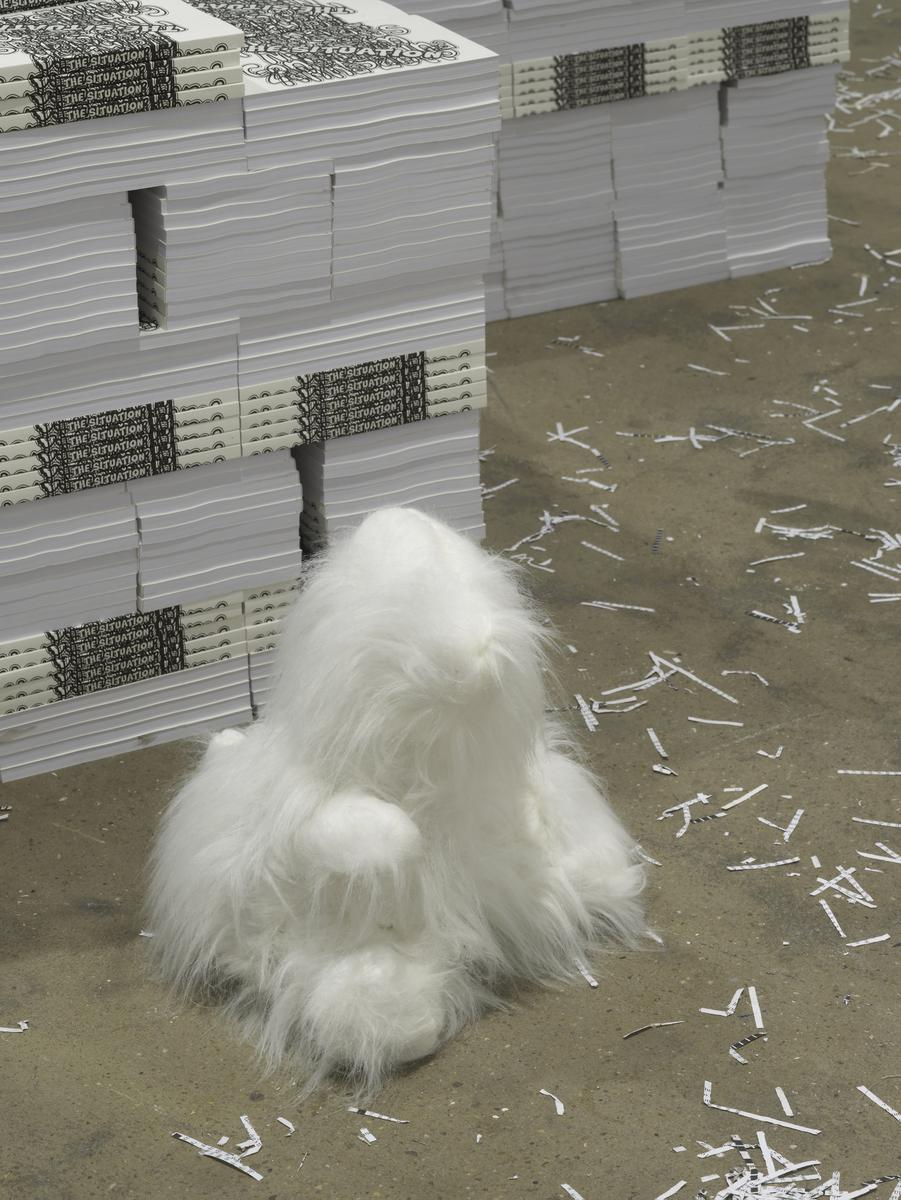