Seven on Seven 2017
By Rhizome 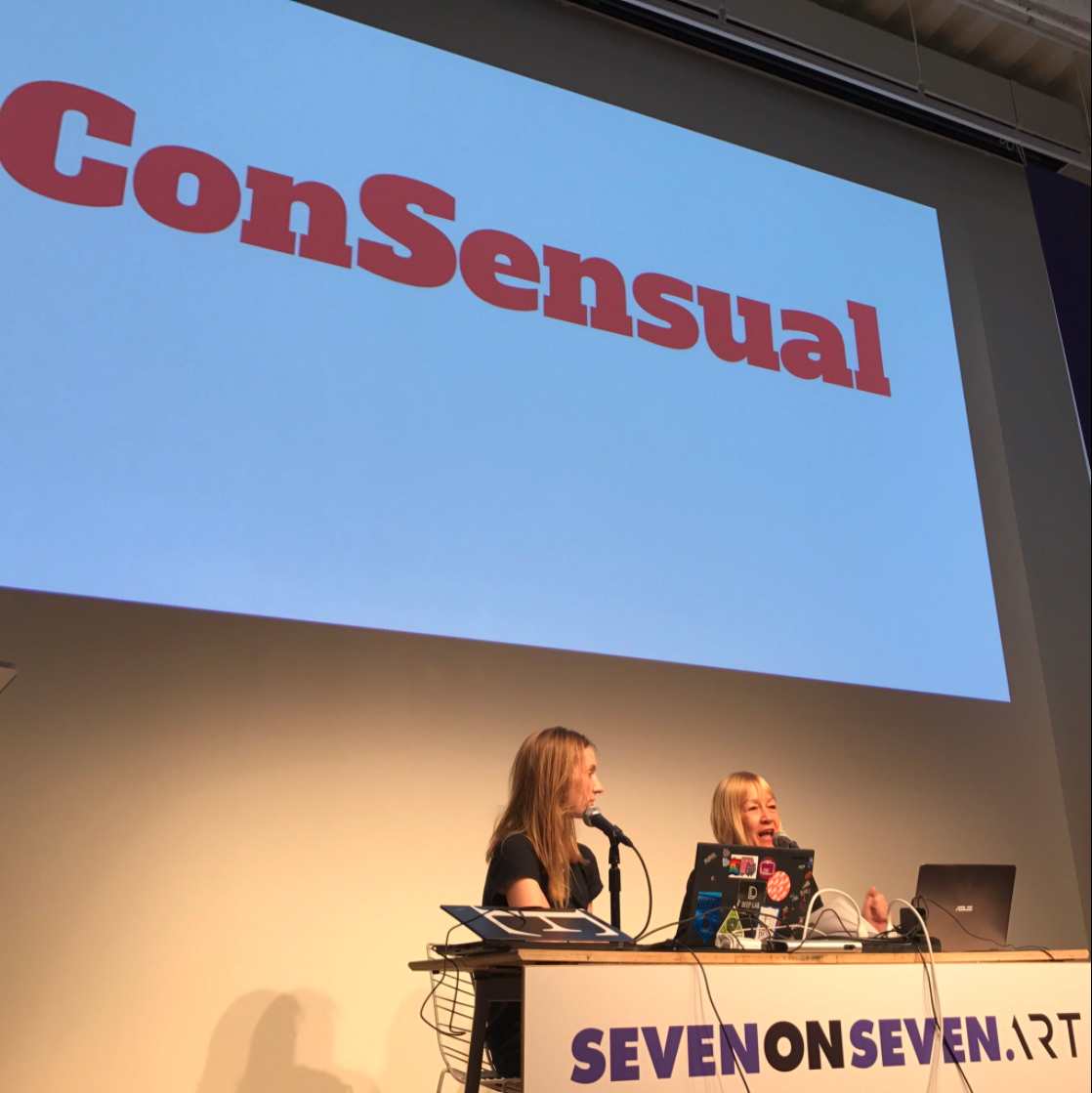 Organized by Michael Connor and Zachary Kaplan, this edition of Seven on Seven was held on April 21, 2017 at the New Museum. Read Dayna Evans, writing for New York Magazine, or Connor's closing report.

Doreen St. Félix was born and raised in Brooklyn, New York. Her writing has appeared in The New Yorker, The New York Times Magazine, The FADER, Vogue, and many others. Her criticism focuses on popular culture, language, and race. Currently, she is a staff writer at The New Yorker.

Founded in NYC in 2010, DIS is a collaborative project for artists, designers, stylists, and writers, primarily led by Lauren Boyle, Solomon Chase, Marco Roso, and David Toro. Evolving from an online, interactive magazine, DIS provides a horizontal exploration of fashion, art, culture, and the collaborative nature of the internet. The collective was a part of the New Museum's Triennial: Surround Audience curated by Lauren Cornell and Ryan Trecartin (2015), and they most recently curated the 9th Berlin Biennale for Contemporary Art (2016).

Rachel Haot was a Managing Director at 1776, leading New York City strategy and operations. Prior to this, Haot was Chief Digital Officer and Deputy Secretary for Technology of New York State in 2014 and 2015. She served under former Mayor Michael R. Bloomberg as Chief Digital Officer for the City of New York from 2011 to 2013. Earlier in her career, Haot was founder and CEO of GroundReport, a global news platform.

Read about their process. Explore their creation: Polimbo

Bunny Rogers is an artist and poet. She was born in Houston, Texas, and lives and works in Stockholm. Recent exhibitions include: Pure Fiction, curated by Julie Boukobza, Marian Goodman Gallery, Paris (2016); We are All Traitors, Hessel Museum of Art, Annandale-on-Hudson (2016); wrjnger, Foundation de 11 Lijnen, Oudenberg (2016); and Columbine Cafeteria, Société, Berlin (2016).

Nozlee Samadzadeh is an engineer at Vox Media and an editor at The Morning News, where she produces the Tournament of Books. She studied computer science and art history at Yale, and has worked as an art journalist, small-scale organic farmer, and editor at the website Food52.

Read about their process. See Bunny and Nozlee's creation: Collects

Moscow-born, German-based artist Olia Lialina has produced many influential works of net art: My Boyfriend Came Back from the War (1996), Agatha Appears (1997), First Real Net Art Gallery (1998), Last Real Net Art Museum (2000), Online Newspapers (2004-2017), Summer (2013), best.effort.network (2015), and Bear With Me (2017). She is a professor at Merz Akademie in Germany. Lialina writes on digital culture, net art, and web vernacular. She is an animated GIF model and co-founder of Geocities Research Institute.

Mike Tyka is co-founder of the Google Artists and Machine Intelligence program. He studied Biochemistry at the University of Bristol and went on to work as a research fellow at the University of Washington, studying the structure and dynamics of protein molecules. He co-founded ATLSpace, an artist studio in Seattle, and has been creating metal and glass sculptures of protein molecules. In 2013, Mike went to Google to study neural networks, both artificial and natural. This work naturally spilled over to his artistic interests, exploring the possibilities of artificial neural networks for creating art.

Cindy Gallop started the ad agency Bartle Bogle Hegarty New York in 1998. She is the founder of IfWeRanTheWorld.com, co-action software that enables brands and consumers to implement the business model of the future; www.makelovenotporn.com in 2009; and in 2013 launched social sex videosharing platform Makelovenotporn.tv.

Addie Wagenknecht is an American artist based in Europe. She has exhibited at MuseumsQuartier, Vienna; La Gaîté Lyrique, Paris; The Istanbul Modern; and Whitechapel Gallery, among others. Wagenknecht founded Deep Lab in 2014 with a Warhol Foundation Grant and is a member of the Free Art & Technology (F.A.T.) Lab. Wagenknecht also co-produced the open source laser cutter Lasersaur.

Chris Paik is a partner at Thrive Capital, a New York-based venture capital firm, where he invests in tech companies. In his time at Thrive, Paik has served on the boards of ClassPass, Flatiron School, Grailed, Patreon, Tictail, Twitch (acquired by Amazon), and Unity. He graduated from Harvard University, studying economics and psychology.

Jayson Musson is an artist, performer, writer, and filmmaker based in New York City. In January 2017, Musson premiered a new virtuality work, an astral memorial for victims of police violence, for New Museum and Rhizome’s First Look: Artists’ VR. His most well-known creation is Hennessy Youngman, a YouTube art critic who used hip-hop vernacular to critique the exclusionary language of art discourse. Other recent presentations include solo exhibitions at Fleisher/Ollman Gallery, Philadelphia, and Salon94, New York.

Jonah Peretti is the founder and CEO of BuzzFeed. After co-founding The Huffington Post in 2005, Peretti launched BuzzFeed in 2006 as an experimental lab focused on tracking viral content and making things people wanted to share. Under Peretti’s leadership, BuzzFeed has grown to have over 1000 employees, with more than 200 million monthly unique visitors, 1.5 billion monthly video views, writers creating shareable and entertaining content, and reporters covering everything from politics to technology.

The pair proposed Blockedt, an app that allows constant scrolling without visible users.

Miao Ying was born in Shanghai, China. She currently resides in New York and Shanghai. Her work discusses mainstream technology and contemporary consciousness, along with new modes of politics, aesthetics, and consciousness that represent reality through technology. She deliberately applies a thread of humor to her works and often addresses her Stockholm Syndrome-like relationship with censorship and self-censorship as a user of the Chinese internet (Great Firewall).

Mehdi Yahyanejad is founder of Balatarin.com, a user-generated news website in Persian that played a crucial role in the pro-democracy movement in Iran in 2009. He is the co-founder of NetFreedom Pioneers, a nonprofit organization that provides access to digital information via satellite to regions of the world with limited internet access. He is researching and developing anti-censorship technologies.

They proposed a "filter bubble detox" through the Internet that would allow for a more balanced "information diet."