Rhizome Would Not Exist Without the NEA
By Zachary Kaplan 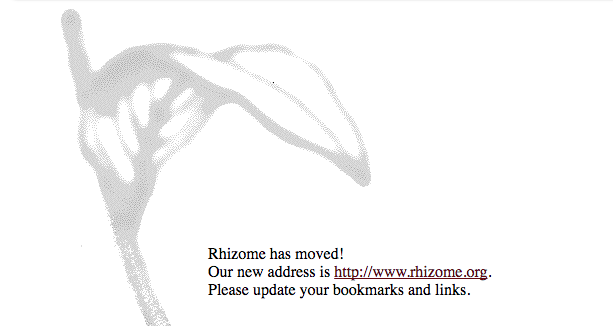 This morning, the National Endowment for the Arts sent an email informing all pending grantees that it is “operating under an FY17 Continuing Resolution, which ends on April 28, 2017,” and that all forward awards “will be delayed pending the resolution of government funding for the remainder of FY17.” This was the first formal communication about what we've all heard in the news: defunding the NEA is a priority of the current budget proposal.

We'll see what happens—the NEA has been targeted for elimination many times before—but on this day that feels like a benchmark in what has been called the “deconstruction of the administrative state,” I wanted to acknowledge the NEA for all it has done for this organization, which is just one of countless served, empowered, and saved by the funding body.

In 1999, Rhizome was three years old. We were launching what would eventually become the ArtBase, an archive that would serve artists in an entirely new way, define the net art field, and set the organization on a track that would only come to full fruition a decade later. Concurrent with this crucial initiative, founder Mark Tribe, along with colleagues Alex Galloway and Rachel Greene, struggled to keep the organization afloat. An innovative funding model—pairing cultural activities to a venture-backed startup called StockObjects—was not panning out as expected, and a burgeoning platform for artists was on the verge of being extinguished.

And then came a grant from the NEA, which arrived in 1999. It was a risk of the type we dream the government taking to support what the market won't—a risk taken for niche art, new forms, and unproven artists and administrators. It was also a lifesaver—this support, together with a few other grants*, floated the organization as it began its slow evolution into maturity and stability. Just last October, Mark was recounting Rhizome's early history, and recalled the NEA's risky award as the crucial turning-point for the organization. Our survival beyond those make-or-break days is nothing short of miraculous.

In short, the Rhizome that today commissions, presents, and preserves internet art and culture, that takes on projects like Net Art Anthology, and builds tools like Webrecorder, exists thanks to the NEA and its ongoing commitment to supporting American creativity in even its weirdest forms.

Along with countless other organizations, in every state in the United States—organizations which certainly have stories similiar to ours—Rhizome thanks the National Endowment for the Arts for all it has done, and, in advance, for all it hopefully will still do way into the future.

*One of the other crucial grants was from Joan Shikegawa at Rockefeller Foundation. Shikegawa would go on to chair the NEA herself.

Header Image: A screenshot from those make-or-break days, when we left .com for .org.