'This is What Happens When Art Meets Rappers'
By Michael Connor 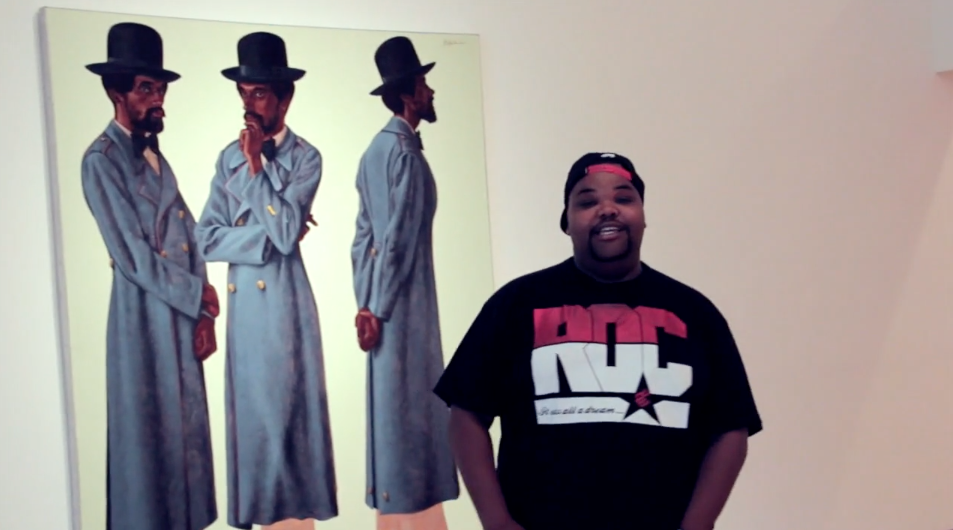 Museum Mixtape (Dirty South Edition) is a 2014 video­ album in which rap artists perform live critiques of museums in the southeast United States. Created by Juan Obando, it was produced as a Rhizome commission, and will show at the Reverse Art Space in Brooklyn on Friday, February 12 and concurrently on the front page of rhizome.org.

MC: When you finished this process, you told me you were having dinner with some of the musicians involved, and talking about the experience of rapping in art museums. What kinds of experiences did you have? Was it completely awkward? Were there also moments of interesting cultural cross-pollination?

JO: I became very close with some of the rap artists involved and we had great moments dissecting our experience, from our respective positions: me behind the cameras and dealing with museum officials and them in front, facing the work and the spaces. The experiences were diverse and all very positive in their own way.

One of the museums, for example, seemed to not have read my request letter in full, assuming this project was about making a cool ad for the institution. For that particular site I was working with this awesome lyricist who was really witty and satirical. When we arrived, we were greeted by one of the museum officials and started shooting. He nailed the first take, which was this very critical and funny song, and then we realized that this was not what the museum official was expecting at all and we were shown our way out in a very awkward moment of dry confusion. The museum had already signed a release form so I was able to use that take in the final piece. 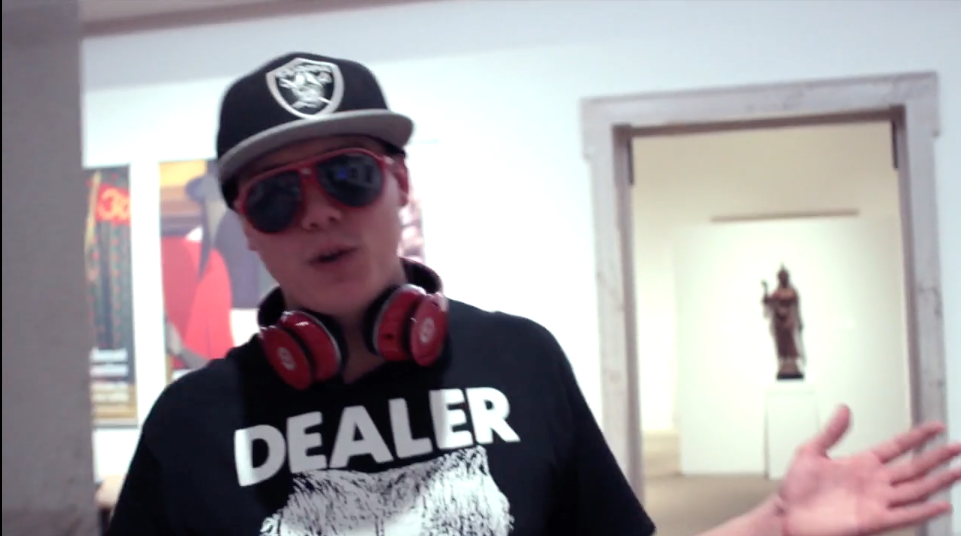 With another institution I had a 25-email conversation and every request from them was really hard to oblige. They wanted to approve and edit the lyrics in advance, which was something I wasn’t willing to do, so we called off the shoot. I have to say that, in general, there was always some degree of discomfort from the three sides: the performers, myself, and the institutions; but in most cases the collision of worlds transformed the situation into a really friendly, critical, collaborative exchange. The Hunter Museum in Chattanooga, Tennessee, started having independent conversations with Easy Steve (the local performer) and incorporating him into their educational programs. The same with the Virginia MOCA and the local rap crew that I worked with there, and I just recently heard about the Nasher Museum in Durham, NC, looking into hosting or being involved with the annual Hip-Hop Summit that takes place in the city.

I also have now a really extensive collection of southern hip-hop now.

MC: After connecting with the artists online, how did you go about working with them?

JO: I would meet them at the location for a first view of the space and exhibition and a discussion about my ideas and their input/angle for the project. I left all the writing up to the artists, and the only restriction was that I did not want them to be influenced by any of the official institutional information. I asked them to write based on just the experience of visiting the exhibitions first hand.

The performers were always very excited about the opportunity. There was even some slight signs of sweet revenge, a certain beef with the museum and high culture in general. Almost every performer, at some point of the visits, asked “WTF? Is THIS Art?” to which I was almost always unable to respond. It really made me think about how coded and exclusive the language of institutionalized art is and how detached young culturally active people can be from that language, especially in these cities. 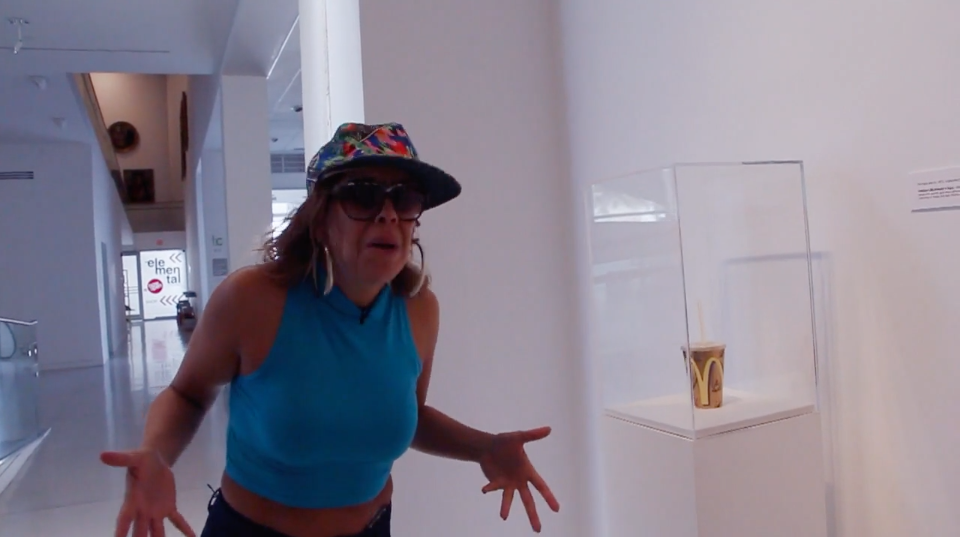 Miss Angelina performs at the Bass Art Museum in Miami.

MC: What artwork produced the best lyrical response, and what was it?

JO: There is a particular Baroque and Renaissance collection at the Bass Museum in Miami within the main ramp that connects the two floors. Most of the museum programming is contemporary, but this collection is central to the space. MC Jumanji, the local Miami rapper I worked with, was super interested in this collection.

He was committed to setting the bar high regarding lyrical and intellectual content, as an indirect diss to the other rappers in the project, who kind of dismissed most art at first sight. His lyrics were incredibly complex and lengthy. Since the idea of the project was to use one unedited take of each song, it was inevitable that we would be doing multiple takes to get this one right. Indeed, it took us probably three hours to get it done, but it’s one of my favorite songs in the album. 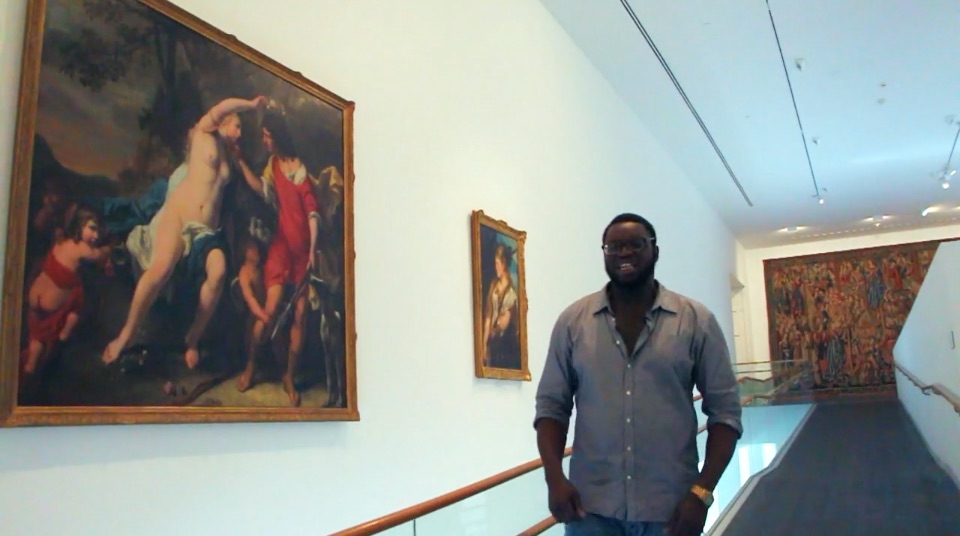 It uses these classic paintings to talk about the distance between young people and classic art, and connects the painted scenes with today’s struggle for cultural integration. Ease’s (Durham, NC) and Absalute (Chapel Hill, NC) are also big favorites of mine. Super funny and smart. Seeing them live with their group The Kush Administration in downtown Chapel Hill (a couple of blocks away from the Ackland Museum) was a big inspiration for this project in its beginnings.

MC: In your proposal for this project, you asked, "Is  the museum space obsolete? Can its architecture host different uses and  inspire alternative narratives? Are cultural institutions completely  out of tune with culturally active local demographics? What kind of new forms can this apparent disconnection create?" So, is it? Can it? Are they? And where do we go from here?

JO: I think I’m still (or even more so now) unable to answer those questions. Seems like if I was able to do what I set out to do, and have museums signing up to it, then these spaces are still full of possibilities. Most directors, curators and educators I encountered in the institutions involved in the project had a real intention to reclaim the museum as an active project space or classroom, rather than a mere exhibition space.

They just seemed to struggle to keep up with the traditional museum mechanics and at the same time trying to disrupt or subvert the space without risking too much. It’s tricky. Practices in many of these institutions are still tied to a very traditional way of doing things and there is not a clear sensitivity for contemporary flexibility and experimentation.

Museum architecture is generally so voluptuous and imposing, the appeal of these spaces is undeniable. Most of the performers I worked with were so inspired by the space and had the best ideas about how to activate it. I think there is much to learn from subcultural forms and mechanics. We’re at a time where it is impossible to ignore the speed in which cultural information moves, and how it expands beyond the circuits that used to dominate its dissemination. The decentralized nature of current cultural circuits will definitely shape the way people appreciate, value, and disrupt the institutions.