Online Now: The Art of Dissent, a film by Laura Poitras for Seven on Seven
By Rhizome 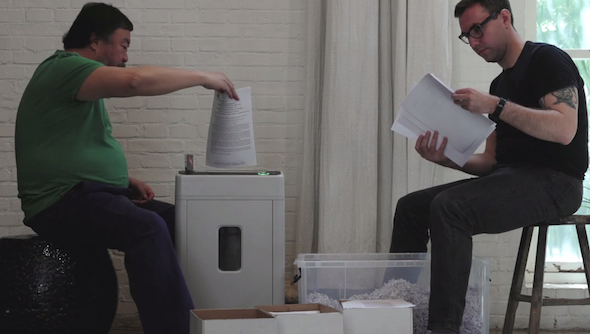 The Art of Dissent, a new film by Laura Poitras commissioned by Rhizome at the New Museum, is released online today as part of the New York Times Op-Docs series. The film portrays a 72-hour collaboration in Beijing between contemporary artist Ai Weiwei and Tor Project / Wikileaks activist Jacob Appelbaum. It is Poitras's first project since CITIZENFOUR, her celebrated portrait of Edward Snowden.

Ai and Appelbaum's collaboration was part of Rhizome’s art-meets-tech event, Seven on Seven, which was held at the New Museum on May 2, 2015.

Recognizing their shared, urgent concerns about the erosion of civil liberties and the proliferation of surveillance technologies, Rhizome brought Ai and Appelbaum together to spend three days in deep discussion and open-ended collaboration. The pair was invited to create something new—an artwork, an action, a provocation, a piece of technology, or whatever they imagined—as part of this signature program that asks luminary artists and technologists to work across disciplines. (Six other teams met at the New Museum in New York, and video documentation of their presentations is also available online through Rhizome's own website.)

Find out what Ai and Appelbaum made in Poitras's The Art of Dissent, this film of an important Seven on Seven collaboration, online now on the New York Times Op-Docs page.