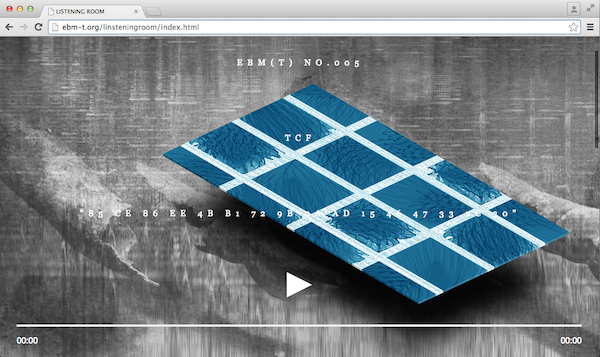 You're a small triangle in flight across a screen, four pixels wide and eight pixels tall. Your lot in life is to be an (x,y) pair. Your velocity has a fixed range. After the chaos of your origin at a random point in this field, your path is wholly determined by the triangles flying closest to you, and your path influences them in turn.

You are both an instantiated object and a member of a flock, a class, a school. You follow three rules: separation, alignment, cohesion. These three rules collaborate to update your position—helping you avoid collision, target a collective goal, stay close to friends.

This is a simplified rendering of Boids, an artificial life program invented by Craig Reynolds in 1986. Reynolds referred to his simulated "bird-oid objects" as boids, which became shorthand for any creatures that flock like birds.

Tokyo-based online sound gallery EBM (T), run by Nozomu Matsumoto and Nile Koetting, is currently hosting a sonic enactment of Boids: 85 CE 86 EE 4B B1 72 9B 0A AD 15 46 47 33 2C 30, by data composer TCF (Lars Holdhus). EBM (T) is designed as a "virtual aural room," an intimate listening experience. In its past programs, this has allowed for an amphitheater organized around singular object-themes—from the chess-inspired musique concréte of Jeff Witscher to field recordings of authors typing—to emerge. TCF's contribution turns the sound gallery into a bestiary of -oids, articulating the hidden language of machine flocking as a highly listenable audio composition.

Boids are programmatic objects whose movements are defined by three arbitrarily weighted functions (separation, alignment, cohesion). The cluster of triangles (boids) coasts and drifts around the screen, refreshing thirty times a second. Every refresh, each triangle compares its vector (speed and direction) and location (x,y coordinate) to those of every other triangle. The vectors update; each boid blips to a new location.

Reynolds' Boids simulator code reads like a poem. It tells the story of the flock as it draws itself: Add an initial set of boids into the system … Add a new boid into the System … Nascent animal-objects join the school. The group is steered and sped, balanced and weighted along the three vectors.

When we get to the line passing the entire list of boids to each boid individually, we begin to suspect there is some hidden life here: the life of an -oid, a synthetic object.

Boids steering software, originally written by Craig Reynolds in 1986. Implemented in Processing by Laura Greig, based on code by Daniel Shiffman.

Over 85 CE 86...'s 18 minutes of audio, TCF's boids are slowly given life: forms to deploy, space to express themselves within, and a community of like creatures to travel with. The opening is all abrasive discovery and chaos as the entities interact and test boundaries. In the first five minutes, the listener descends into abyssal deep sea, between thick, pressurized curtains of fogbank drone. Strange intonations emerge from the algorithmic depths. Initially, these calls test intelligibility and strain haptic sense, demanding empathic acclimation. In our correspondence about the work, Koetting wrote that these "may be the cries of the trilobites and marine plants from the Cambrian multiplying in cyberspace."

Gradually, a language emerges. The piece transitions into a smooth, cohesive set of harmonies, a cinema of boids in operatic flight. Fluttering whirrs, tortured chirps and wails suggest forms of intelligent life unknown to us. The orchestra dives, splits and coalesces with the sea around as its sheet music. At points, we feel fear, thinking of the predatory flocking in Hitchcock's The Birds; elsewhere, awe, recalling YouTube videos of starling murmurations against a gaining sunset. Ultimately, the tone darkens, closing 85 CE 86... with cacophonic scenes of machine dominance.

It's our choice to hear an -oid: hearing this menagerie of aquatic boids, registering them as alive, is an intentional act.

We might consider how these schools are a type of carpentry, Ian Bogost's term for objects that do theoretical labor when our frameworks fail. Well-known proponents of Object-Oriented Ontology (OOO), a computer-inspired subfield of philosophy, argue that in considering the lives of objects, we gain novel paradigms through which to interpret human action and belief.

85 CE 86... subtly immerses the human subject, until her head is turned completely: until she finds herself looking through the eyes of a boid. She can't always see the greater drama of her entropic flock. The push and pull between order and disorder can remain unseen. Her flock morphs, splits, and blurs with others in an obscure succession of operating logics.

If we can consider the practice of object-oriented coding as a metaphor for worldly experience, humans are boids, too. We may not have a list of cumbersome rules, if-then statements for every encounter. But we do have certain core functions—survive, seek endorphins, reproduce.

The human group soars along on an unspecified journey. Single human boids make breakaways that are necessary for the species to survive. Early humanity's evolution depended on such radical departures from the herd in search of resources. Listening, we sense the will to split off, guided by instinct, by forces more complex than the three rules.

Algorithmic culture can feel scary, robotic. We fear becoming cogs, clutching shreds of agency, seeking synchronicity with group rule. This composition asks us to consider the flip side, the automated life. It imagines the bot's existence with dimensionality, full of beauty.

Boids have a simple life, but not a limited one. The code that drives them is elegant; their individual chirps converge in a harmony only audible to something greater. In practicing boid empathy, we find a salve to a particularly modern anxiety: you're not a subway commuter at rush hour, but a glorious salmon fighting upstream, fulfilling its destiny, enacting its program.