One recurring motif in your work of late has been your posters, sometimes A4 [letter-sized] but sometimes blown up larger, which usually depict one word or phrases, for example, "earth-cult," "sui iurus, or "we will protect the great river." These are presented in generic, unadorned fonts. Your press releases continue this aesthetic, combining these phrases to form a kind of poetry. Reading the text for your recent show at Jupiter Woods, in South London, we see couplings like "#archive #bank #invest / It is within our human capacity" and "how-to-disappear-in-the-anthropocene / the_love_that_sustains_all_matter.html."

Do these phrases create a taxonomy within your work? Do they give a clue to the way you form relations between different politics, geographies and affects? They have featured in a number of different exhibitions and projects over the last year. Might we say they form the skeleton, or the exoskeleton, of your practice?

The words are anchors or/and buoys in an operating system. When I employ them for the A4 page or a larger poster or banner they gesture towards an attempted isolation which I feel is terrifying for them&us. When words are large and isolated on the page they can be looked at for their surface forms and qualities (the curves and angles of the letters rather than the meaning the word points toward) They are also very poised, like templates, often in complete adherence to the prescriptions of google docs. They have to trust themselves to hold their form despite this uninvited and abrupt isolation. The individual poster is like a shield, armor, or veil. What lies beyond and before language as an orientation system?

It's all quite painful but it also forms a levelling arena for the words, the questions, the materials, the space between things, and the possible constellations to be absorbed through the same channel(s). Be it salt, sui iuris, love is enough, iridescent marbles, passion fruit, sharon fruit, is the soul a modular mechanism?, witness, align, ascend [make competing hyperobjects #mother_tongue]

In a more extended document like a press release or a poem the territory is more of a plain and thus the words form horizontals, trajectories and networks. I work extensively with lists as neutral transmitters and naming processes too. I often employ pronouns like we, our & they which form fields of inclusion without specifying exactly who or what is being included. Another tactic I use is to speak very definitely about something which is clearly a multitude e.g "worlds will collide" "this is still sacred ground, nothing else matters" "and then you and I will speak together in unison." I also use open questions What are these ancient responses? Where do we stand? What part of so greater task is committed to us? Questions like this dual-activate a very deep open-search archetype in tandem with the trained and surface behavior of seeing a question as something to be answered. I want the spaces these approaches create to be held open for as long as possible. They are thought realms. #occupy_liminality. 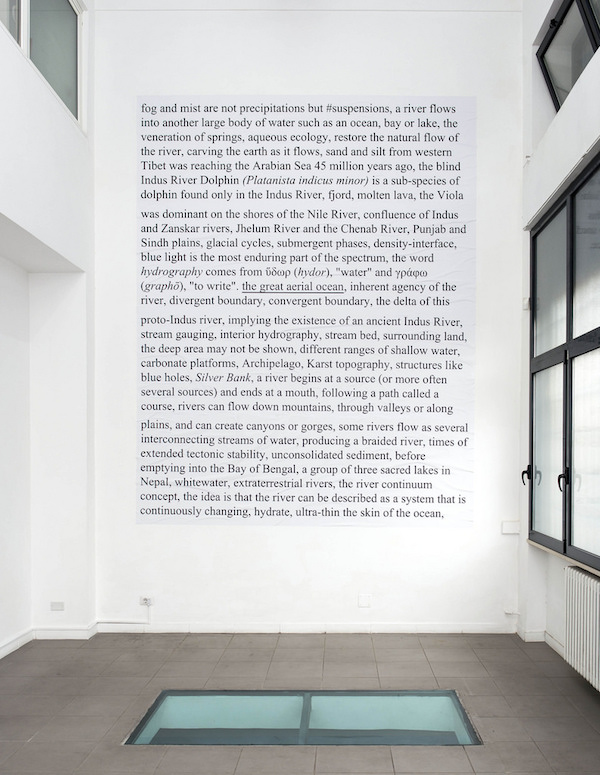 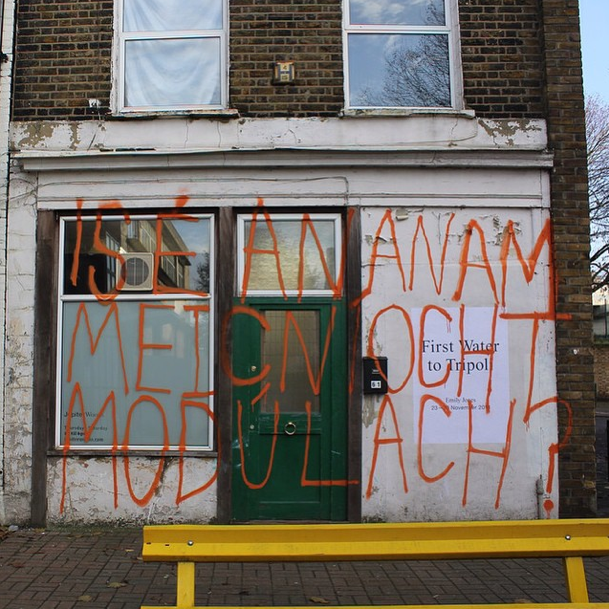 For the same exhibition, "First Water to Tripoli," the question "Is the soul a modular mechanism?" was spray painted across the façade of the gallery, in Irish Gaelic. This phrase appeared inside the gallery space, in English, as typewriter vinyl lettering on a crumbling and damp wall. You have also used Hebrew and Sanskrit in your work. Is translation an aspect of your art practice? What might you be translating between?

धर्मdharma is a sanskrit word variously translatedas "to support, hold, bear, law, order, custom, duty, model, practice, morality, ethics, nature, character, property." Yet, each of these translations is incomplete, while a combination of them does not convey the total sense of the word. The mind's eye image of the plain created by such a word, for which no western language has a single-word translation, is a kind of cartographic blueprint of planetary scale computation and an indicator towards how language forms our internal architecture. And consequently, forms an architectural immunity or individuated operating system which invites and requires invasions, fractures and shifts (so that nobody gets stuck and so that we don't forget the frame is a frame). The intersections where these individual operating systems meet are fertile territories for me and translation is one of these intersections. air-water interfaces, land-water interfaces. Is everyone on earth related?

The Draining of the Mesopotamian Marshes of Iraq is an initiative I'm working with at another of these intersections. On the ground it focuses on the transboundary nature of conservation, the psychic life of cities, and the act of the human hand through the machine. It employs the hashtags #landlocked #reflood and #protect and the phrases the restoration of the marshes is an act of peace + the consecration of the entire world. One of its strata deals with a process of uprooting the name (Oishi Plain, The Aral Sea, The Hawizeh Marsh) from its earth coordinate to present the view that The Aral Sea is also The Hawizeh Marsh and your body. It then reapplies geographic site specificity with reconsidered or shifted borders and boundaries. 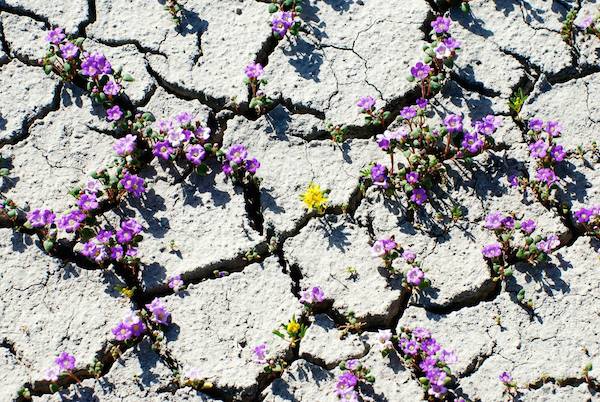 river mouths migrate The Draining of the Mesopotamian Marshes of Iraq dmmiraq.org

Perhaps that's a good segue to a question about locality. For example, your 2014 exhibition "Prayer for the Sonoran Desert" at Life Gallery, London, references the Californian desert in its title, and includes a sculpture comprising rock salt from the south of France. "The Draining of the Mesopotamian Marshes of Iraq" is specific to a rare aquatic landscape in the southern Iraqi desert, massively reduced because of human intervention. How do the specific locations that are evoked relate to the works in the show?

Last week I took a tour of the United Nations Headquarters in New York. The first part of the tour was around the back of the building where the garden area backs onto the East River. We were told about sculptures in the garden which were described as gifts from one nation to another; one for example was "a gift from Arabic women to all women of the world." This continued on the inside where one meeting chamber was a gift from Norway. This is really a very different way of dealing with language, because it clearly cannot be that all Arabic women decided or were consulted about the sculpture and consequently that all other women in the world knew about the gift, or were even able to receive it. The rhetoric of this institution is such that our tour guide was telling us something that essentially could never be true, but it also isn't a lie. I asked if I could give a gift to the United Nations and was told very clearly after a puzzled contemplation that the United Nations doesn't deal with individuals. The UN approach relates to the invocatory power of language which is a tool we all posses and wield to various degrees. To say something out loud is to speak it into being, to call it by its name, which is both to define and thus limit but also to allow it to be at all.

In this line the pile of salt is a pile of salt. It isn't a sculpture though sometimes it might be a helpful currency to veil it this way. 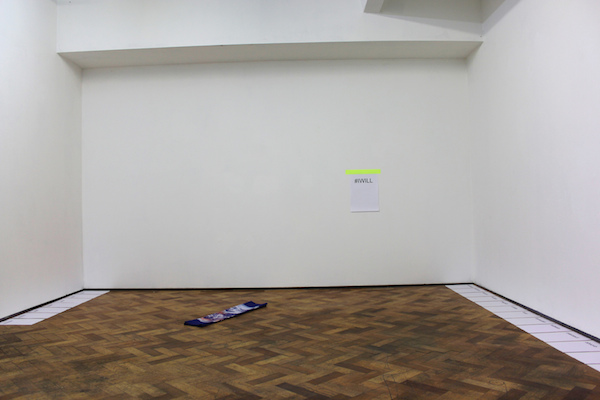 Do you offer gifts to your viewers?

When I was at my parents' house in the summer we received a slip of paper through the letterbox saying that our local church would be praying for our street the following week and if we had any specific prayers we should email them. I felt overwhelmed and trapped and implicated within an act of giving which seemed to give too much/not enough because it didn't give a way out. They were praying for the whole street regardless and everything within that zone was to be included. There is no outside. Sometimes the act of giving is the most subtle kind of violence because it's disguised as an (innocent) gift, but it actually translates as and is weighted with dependence, expectation, contracts, etc. However, if our individual needs, requests, observations and feelings can be directed into appropriate channels, the human capacity to give is a self-replicating and ever-replenishing renewable resource and we all carry vast transformative powers. Co-constituting dance?

You have started a small exhibition program in your flat, and Holly White will also do a residency there. Is the domestic space important in your work?

The exhibition/residency programme in my flat is an approach to community, connection, stability and offering which is in part related to having a child and also to to do with creating a space to connect with another practice in a deeper way than current structures offer.

What is the ecology of water in your practice? (Can you comment on this?) You reference water but you rarely include a body of water in the work on display.

I think a lot about swamps as a kind of fertile muck matrix from which life arose. At this point when you invoke something by saying its name it's the same as it being physically present in the space. The language surrounding water offers more possibility or movement to me than actually working with water itself. Language is the interface between the speaker and the thing itself and is constantly longing to touch back into the unity from which it came. I want to make spaces where we can invoke and hold the Sonoran Desert and a passion fruit that has been cut in half, together, horizontally. emotional geography, eyeless interaction, internalised everything. 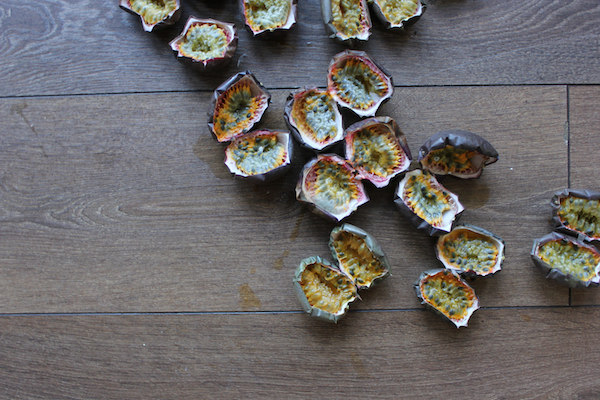 How/when did you begin working creatively with technology? When I graduated in 2008 I created a fictional gallery in Melbourne and wrote to my University alumni department to tell them I was doing a residency there and they published an article detailing my success.

Where did you go to school? Oxford Brookes

What do you do for a living or what occupations have you held previously? I work as a nanny in North London 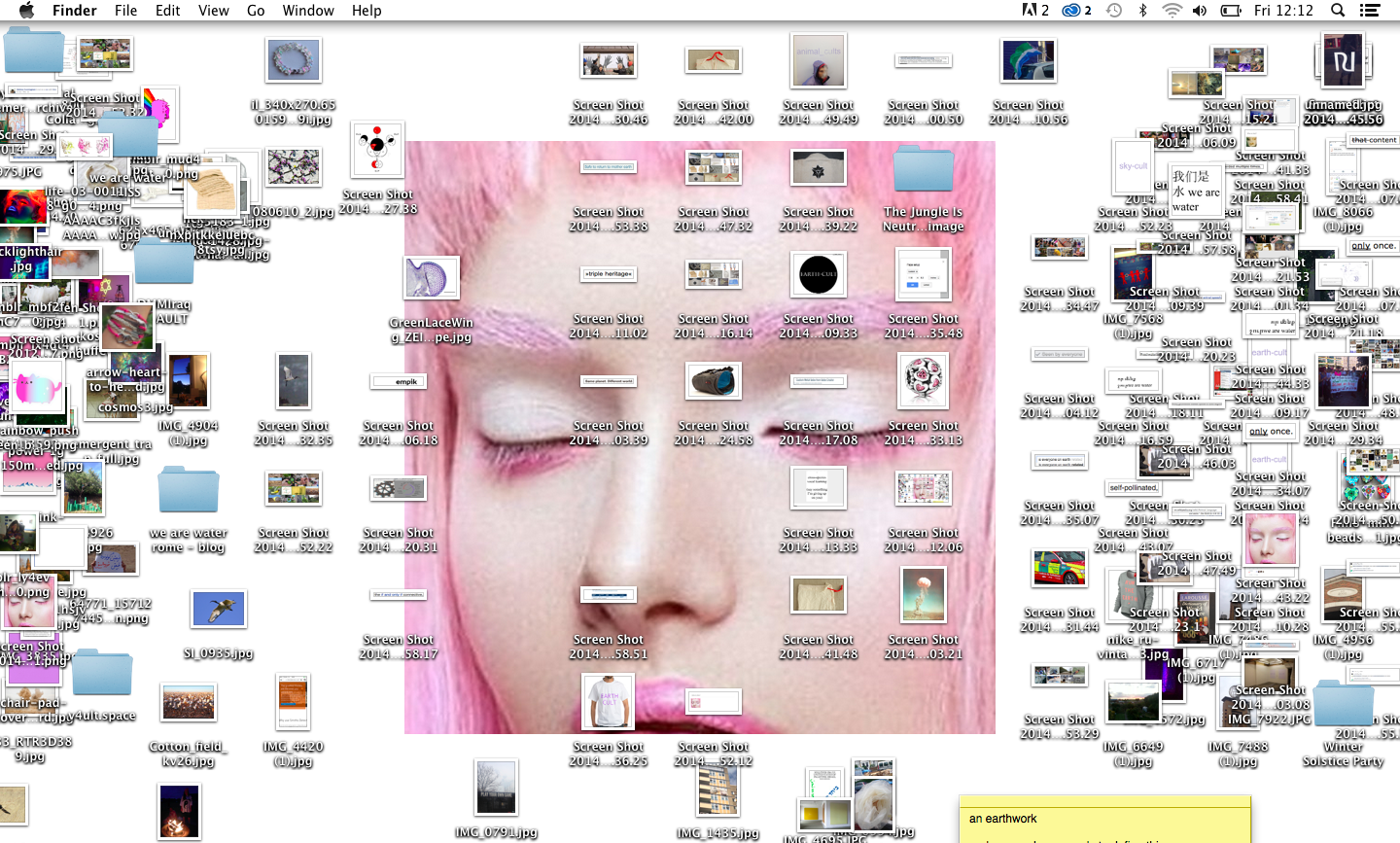