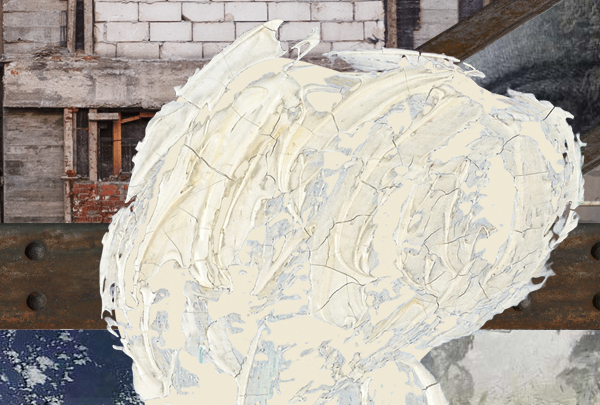 Indirect Flights (2015), an online work by Joe Hamilton with sound by J.G. Biberkopf and support from The Moving Museum, blends satellite images, organic textures, brush strokes, and architectural fragments into a dense panorama accessible via a Google Maps-like interface at the website www.indirect.flights. Rhizome's summer fellow Heloïse Cullen talked Hamilton about the project via email.

Navigating through indirect.flights I had a feeling of walking on the streets, smartphone on hands. I also felt a distance from actually being surrounded by natural landscapes (which for me is rather sad). The layers that show nature seem distant from a human—immersed—point of view, satellite images, mostly layered in the far bottom layer, watched while I navigated listening to urban sounds.

I can see how you felt a distance to the elements of nature in the work. The piece is rather dystopian when looked at in a certain light. Many elements are forced in the frame, overlapping and fighting for their own presence. A lot of the visual material is weathered and messy although still very high resolution and crisp. I didn't set about creating a piece about dystopia but It seems appropriate that some viewers could read it as such.

I sent the indirect.flights link the other day via SMS to a friend who was asking "what's net art?" and I was surprised to notice it works really well on mobile. A lot of net art doesn't work that well on mobile—was this a specific decision on your part?

It was super important for me that the work function well on mobile. To start with I think it's meaningful for some viewers to experience the work in transit on a touch screen. The work is navigated in a way similar to online maps and mobile has become the default way of using a map now. Secondly, people are increasingly accessing the internet through mobile devices so it's just good practice for anything put online to be optimised for mobile.

You’ve said that interfaces are "pivotal in shaping communities online." How do map interfaces, which you reference with indirect.flights, shape communities, especially since they’re so often used as we travel through what used to be thought of as "offline" space?

Online map interfaces are an authority on where, how and when we move around and that must contribute to shaping communities. I use maps not only when travelling to new places but in the city I live. If I'm meeting somebody and I know exactly how to get to the agreed location I will still often use a map to estimate the time it will take to get there. Having such a tool makes us more efficient and calculated in our decisions of how to move around in the world.

It's easy to forget but another important point is that the maps we use for free are offered to us by companies that are running a for-profit business. This has an impact on what information we see on a map and the data we create from using the map is stored and analyzed for further business opportunities. While it might seem insignificant in the short term it has the potential over time to shape people and communities by manipulating their decisions on where, when and how to go anywhere.

Can you talk a little about  your process? How did you select the source material, including the photos and map elements, as well as J.G. Biberkopf's sound recordings? Was there a structuring logic?

The Indirect Flights website is part of a body work that was started in 2014 and was centred around visiting many destinations in the Middle East, Asia and Europe to experience a vast array of landscapes first hand and collect materials for the new work. The first destinations were selected because of their unique natural or urban landscapes and then additional destinations were selected by dissecting the flight paths. This created an experience that was dependent on the network of airports and available flights. Travel infrastructure, border control and flight availability play a role in regulating the flow of people and their experience of the world just like the infrastructure and localized policing of the internet controls the flow of data, communication and the user's experience of the world. While visiting these locations I recorded my own photographs and video and also searched the internet for additional material. This visual material was blended, layered and combined in to the artworks for the project. For the Indirect Flights website I was drawn to the use of found aerial photography as a base for the work and then contrasting it in the foreground with my own close up photographs of raw materials and architecture. A mixture of micro and macro, found and recorded, personal and impersonal.

For the audio J.G Biberkopf created four unique soundscapes that combine detail Foley and atmospheric sounds. As the viewer pans across the work the audio tracks fade in and out depending on your location. I am honoured to have been initially contacted by Biberkopf who noted my previous artwork as an inspiration for how his practice with sound evolved. As I understand it, Biberkopf works with both found and recorded material much like I do.

Screenshot, detail. Indirect Flights can be viewed at www.indirect.flights