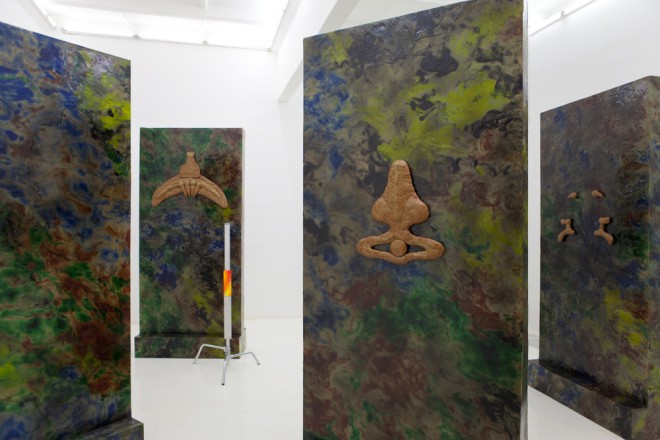 The first exhibition of your work that I saw was "Survivors' Hunting" at Magician Space, Beijing, in 2013. It showed your tendency towards exploring history and artefacts and the way these are presented, as well as your attitude to time and simultaneity—ignoring linear time. In it, there was a series called Cloud Atlas (2013; the title is copied from the 2004 novel by David Mitchell, in which past and future come to overlap)—freestanding works made of wooden board and painted in mushy, camouflage colors with car paint. Tall and glossy, standing in the small gallery like totems or movable walls for a stage set. They seemed to stand for something (like monuments or steles do), yet the nature of that something was missing completely. To me, this felt truly uncanny. Was it part of your aim to create this sense of disorientation?

If I do an exhibition, I like to—as artists we cannot provide any answers. We just can offer possibilities. I try to make my exhibitions convey some kind of sense, with a lot of clues. These clues can maybe lead the audience to somewhere they want to go. In my daily work, I am always trying to find out much more, to discover different methods for how I understand the world, how I draw responses and experiences from it. For the Magician Space show, I provided a lot of details for something. I can't give the right answer. I just give clues so that you can get into it and maybe use a little bit of personal imagination to try to figure out what it is.

I really liked the little brown, manual sculptures in the installation. They were ugly and weird, memorable…

I like things that are bad taste because they can challenge something. It's something to do with a unique presentation or personality. I think that's the only valuable thing for an art piece. I think that, if you want to show you are here, you really need to show something. We don't need just beautiful things—be brave! I don't know. I love people with bad personalities, sometimes. I don't want to work with them, but I like it.

Also in the show at Magician Space, your video David (2013; named after Michelangelo's eponymous sculpture), satirizes the mass-marketing of this art work which appears on souvenir tea towels, t-shirts, pens, postcards and other mass-produced products. You even made a soundtrack to accompany the video with subtitles of the lyrics in Chinese and Chinglish ("He is in everywhere"), sung in a deliberately ditzy tone of voice. For you, what's the effect of humor? Why do you choose to approach this subject in a way that is absurd, rather than more serious? What does it do for the work? 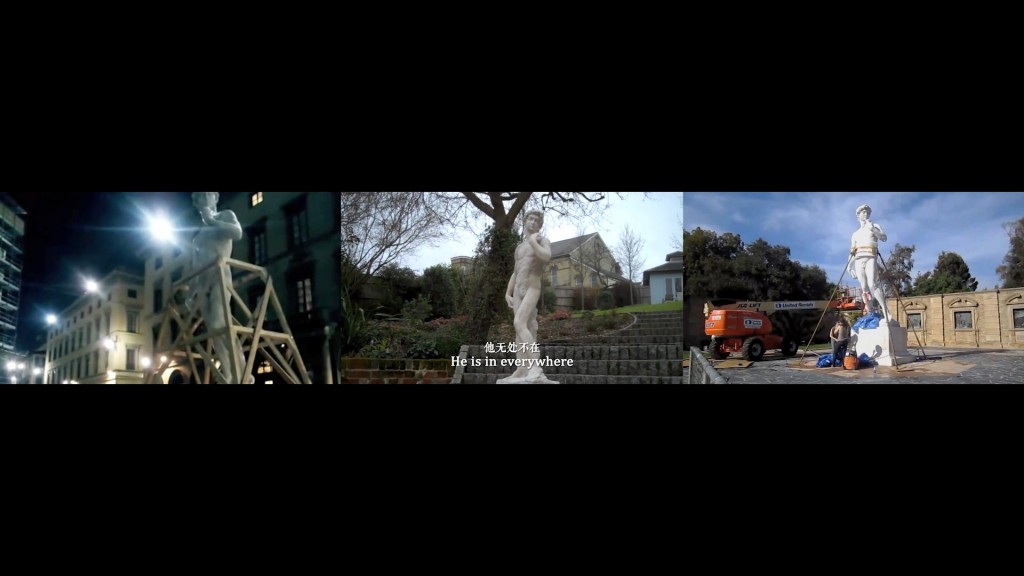 My video work does the same thing as my sculpture. Of course I have some subjects I want to talk about, but I always try to do it a different way. For my first video Cognitive Shape (2013), I'm talking about how you read images from the outside world, how you respond and how that response works into your head and comes out again—a bit like recycling things. For the David video,at the very beginning, I didn't have the intention to do this kind of video, I just tried to search for some material from YouTube. I wanted to find a very famous and classical sculpture, and of course, I found David. I searched and found over 200 images, something like that—you cannot find even one that is really useful. So I downloaded a huge amount of trash. After that I started to get even more interested.ow can I use this garbage to make something? Everybody goes to the plaza and knows David is in there. They wait a long, long time with a camera and finally go inside. And…that's all! They don't know what they want. It's as if people just show they have been there, and don't feel anything. So I made this video and at first I tried to talk in it, but I figured out that this kind of subject is serious—I mean, the original attempt is very serious. And it could be a little bit harsh because you cannot be so judgmental. I tried instead to use a very cheesy, poppy style to show that it's not totally serious. I went to my friend's studio and just tried to sing it out. It's not so critical—I like it.

Maybe humor is tricky. If you can't pick a very good subject, it can be too cheesy and too strict, and people might think it's stupid. Stupid, funny and hilarious are different layers. I never felt nervous about this work in that way. I don't take any method in particular. Before I  make a video I always have my subject, and before I start I think: how should I comment on it? Sometimes funny things, sometimes something serious. Maybe I'm thinking about another video now—what, I cannot tell, but I might use violence. How it looks doesn't matter, really; what matters is what you want to talk about with it. Appearances are less important than content. I am not especially choosing humor as my style. 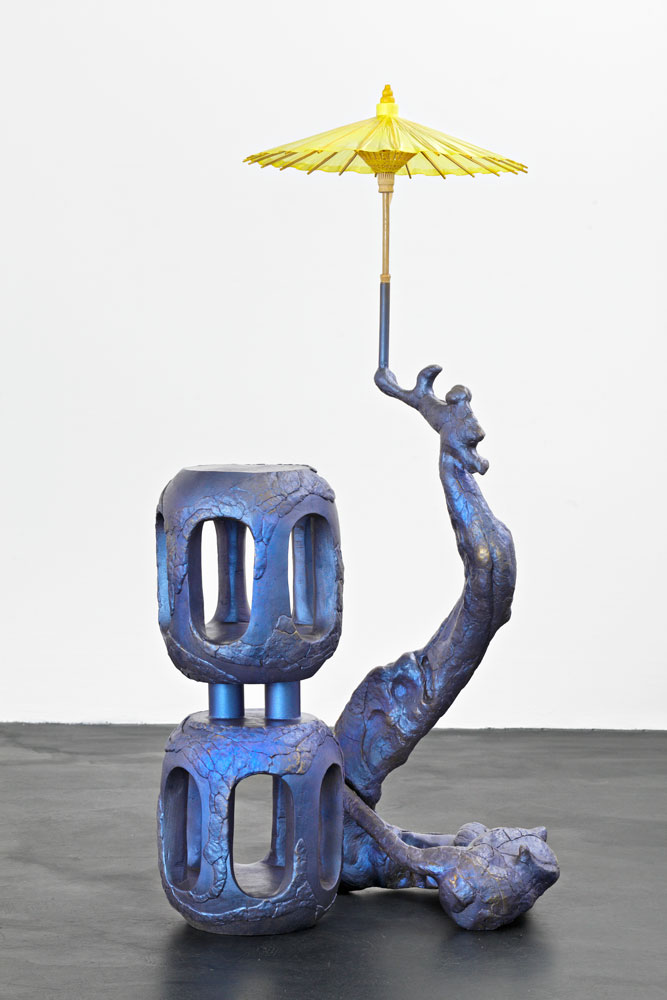 Your Core Sample series (2012) is a set of sculptures; each is composed of a metal rod mounted on a tripod of metal legs. Wrapped round the rods are neon-colored bands or coatings of painted resin. These suggest futuristic exploration—as unnamed samples of material, mined from inside something or some surface. Do you see these as literal artefacts (albeit fake), or more like a metaphor for what you like to do as an artist, and how you approach cultural materials?

This is my very early method. When I first started to make my own personal artworks, I didn't know what I was really interested in. Later, I read about scientific core samples. Everybody knows it's a drill, you screw it in and there are so many layers, some you recognize, some you don't. It's a bit like trying to understand and mix them together; the layers have a relationship with one another, so you need to figure this out, the changing time, etc. That inspired me, at first. I feel it's similar to collecting things. But when some people collect things, it's just a case of letting history itself talk, like specimens. I respect this kind of art, but I personally don't work like that. If I think about a collection of different things, I wonder, what more can I do within this range? I'm not especially interested in a particular kind of media or element, —nothing, I just focus on various weaving methods—more in how things go together.

It is like making a suggestion, offering one possibility in order to start working with it. So that was my first mode. After that, I figured out that there are many things you can play with. We are different, so everyone's contact with the world is different. In my new video, Action (2014), I try to explain how I feel the world. You have your own reason to really get involved in this world. That's another subject to talk about, but that's a clue I can provide to the audience—a clue you can use as your own. It's like a teaching program that you can feel from a reciprocal program. I want to engage every sense; one sensory starting point can lead in many directions. I think as artists we are simply looking for ways to modify the world. 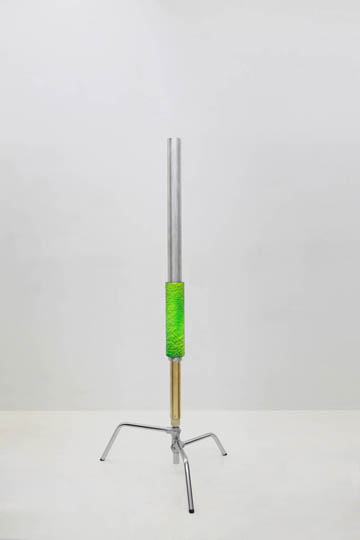 Can you talk about your work in the 2015 Triennial, The Documentary: Geocentric Puncture (2012)? Do you usually find that your feeling about a piece changes when you see it exhibited, instead of in your studio or in your imagination?

When I finish a work, it's because I am really, really satisfied with it. This installation helped me a lot in figuring out my video work—it's hard to explain, but it's true. Until now, my sculpture has had different threads running through it. Maybe you can see several different points; one is a very special readymade, and another may be a very strong, patterned fabric, as here; the third might be a weirdly structured thing or something handmade. Plus, I always try to play a game with the title; so, everything is sort of collected together. So when you see it you must mix the name, the readymade and the very sculptural part together, and try to modify what it is. Maybe you can build up something really alive.

For this piece in the Triennial, I have three backgrounds of the kind usually used in a photographic studio; it's kind of an over-structure, there are a lot of things in it, and I included very modern equipment and also very rough handmade textures in it, as well as industrially designed things to make it very clean. There are a couple of points. One is that you see it and it looks as if it has a sort of personality and is prepared for you to take a photo of it; it's ready, always standing by. In another way, I have put a lot of elements into them that are very handmade. I always think about things which are ancient. They reach the same point as very new things—we know nothing about them and are not very familiar with them. This is something we can bring out and play with to uncover more possibilities. I like columns, so I made a very bad-looking column sculpture. But I also used camera lenses to make a very new column. You see the tripod—it's functional, for a camera. But actually this structure is very classical—you can call it either ancient or super-modern. You can play with these visual elements. A couple of them are present here in one piece. I am always trying to provide different modifications on one thing. For example, if I talk about coffee, I don't specifically say "coffee". I will say "It's a brown liquid, and maybe it smells like summer"—you know, you never talk about something directly. 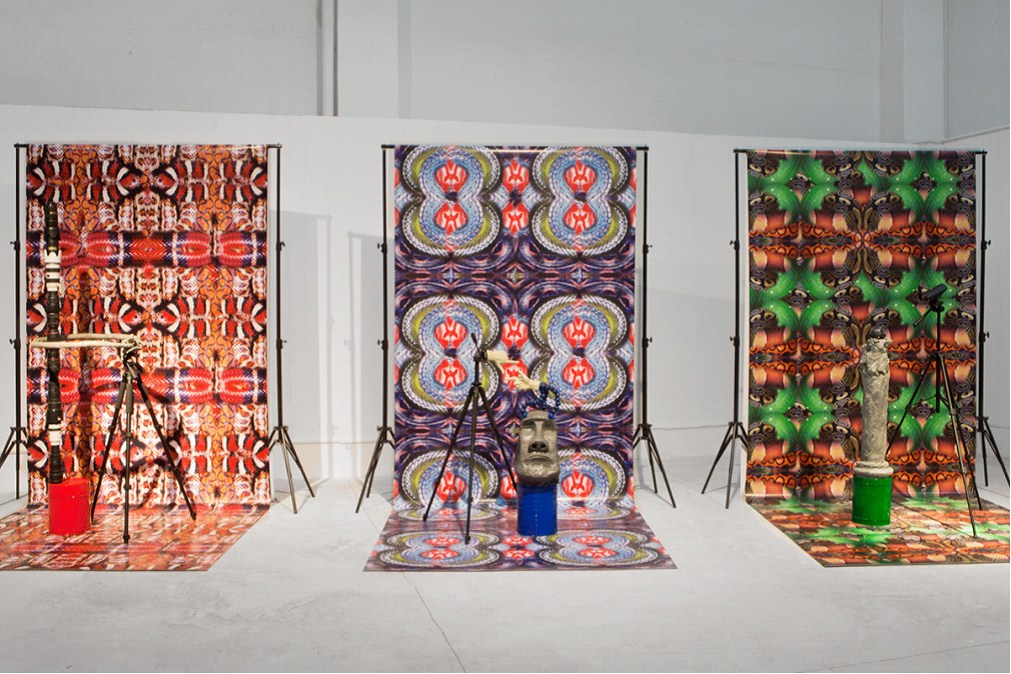 I'm not particularly working with technology, it's just one kind of element that i like to use. I began to like them since 2011.

I studied film directing at the Communication University of China in Beijing.

I'm doing art for a living, as a professional artist. I never had another occupation before. 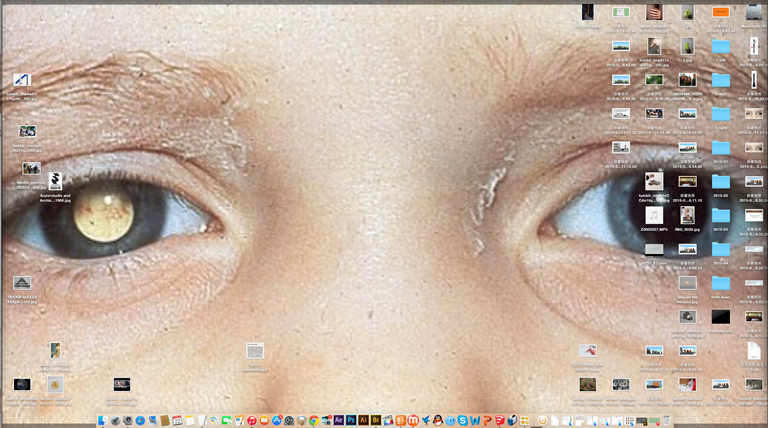