The latest in a series of interviews with artists whose work makes use of or responds to network culture and digital technologies. 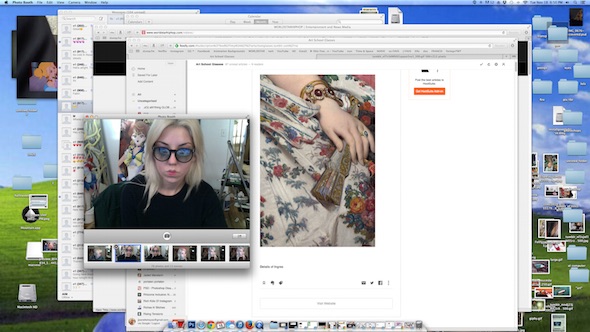 Zachary Kaplan: A few months back, I was on my way to your studio just as you posted a picture of Anna Wintour walking down the street (maybe at Prince and Thompson?). At first I thought, "Why is Anna Wintour skulking around SoHo alone, and how great is this photo?". But then I worried, "Jeanette's not going to be at her studio; she's out in the world capturing this picture that seems so 'on brand.'" When I arrived at your studio in Nolita, though, you were there working on some stuff for New Hive. That all of this seemed to be happening at once—the instagram of Anna Wintour, the in-progress montages, the general thrum of your studio—felt very specific.

Your practice, and its reception, seem fully embedded in social media feeds: Instagram, Twitter, Vine, etc. Can we begin by you guiding me through a day of your work, describing how all of these feeds and networks flow into and out of your practice?

Jeanette Hayes: I have a few shows coming up, and my studio is in my apartment, so I try to keep as "normal" as a schedule as I can. I wake up around 8 or 9, go downstairs to get a coffee and come back up, do a lil email and then start painting. My feeds come into play because I can't sit still for too long. So after a while I start checking the 'gram, twitter, etc. while working.

Then by the time it's night time, who knows. Every day is different. I feel like this is pretty much how everyone works? Everyone tweets or posts to fb and Instagrams constantly in between whatever else they're doing. Everyone just has a cool life and is down to share it, including me. I think living in NYC gives me an advantage because I see and experience great things all of the time.

I'm not precious with my social media. I stay very busy IRL and take pictures of everything, but I'm not always a post-as-I-go kinda girl. I don't have any rules or formula to this — sometimes I post something right away and other times I'll save something for later. Some things might be from that morning, others might be from 2 years ago, others might be from Paris Hilton's Instagram yesterday. And if I post it and I then decide I'm not into it, I'll j delete. I have no problem with deleting something if it's not working for me. I know this is another thing ppl are sometimes precious about (I know not you, Rhizome. Re: Rhizome today ;] ).

Posting on these different outlets is kind of just the sprinkles on top of the ice cream sundae that is my life. At the end of the day when I'm tired of painting or when I come home from whatever and can't sleep, after I've gone through all of my RSS feeds and social media feeds, I go through who I follow's feeds and their followers' feeds and my followers' feeds and who they are following's feeds. I've seen everyone's everything on every outlet. If you're reading this right now, I've seen everything you've ever posted anywhere. I promise you that.

So you're following everyone, everywhere—a claim I kinda actually believe looking at 13k+ favs on Twitter—and you're making your digital work in relation to and to be embedded in that feed, right? Can you detail your development on those feeds where you've made so much work—tumblr, dump.fm, Twitter, etc.?

When I started college, I got into tumblr. My first non pre-fab-themed tumblr was major trolling (I think it was 2008?). When I learned about Tino Sehgal in contemporary art lecture class, I was appalled at an artist who, as a practice, was not to be identified, and I thought it was like a challenge. [Sehgal stipulates that his performances, or "constructed situations," should not be documented - Ed.] Idk why but my response was to make him a discrediting tumblr (just for my professor to see). It was a total troll move, but it was LOL. On this tumblr "Tino" re-invented himself as a gossip-blog-loving, acronym-using, hater-hating contemporary artist with the aesthetic of a livejournal girl who has decided to get with the times and just be famous. I emailed it to my professor and asked for extra credit. I was reprimanded — lmao. Worth it. 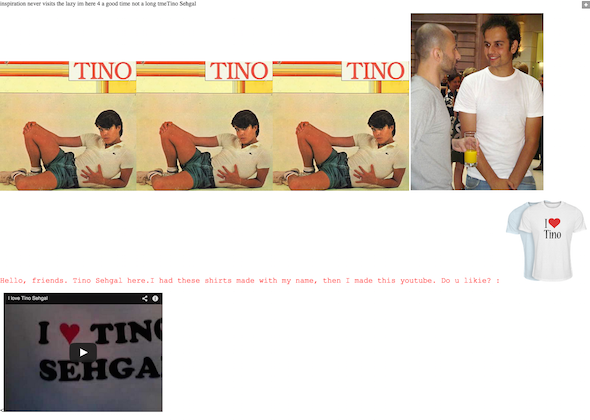 I made more traditional tumblrs (je4nette.tumblr.com, justshutty.tumblr.com, and some others that don't exist anymore) where I made gifs, posted screen shots to, and also reposted things that I just liked.

And then dump.fm rolled around. I always considered participation with internet somehow artistic, even just in appreciation, but now it was like an internet contest of surfing and meme-ing and giffing. So my surfing and gif making skills got really fast here. This grew into me getting lucky/skilled enough to work with companies to make gifs. Now, I make gifs for companies pretty regularly, but my relationship with technology and the internet has taken a social media twist.

As an artist, you emerged and developed alongside the social web—you point to 2008 as the beginning of what's now your practice, and, of course, that was Twitter's breakthrough year and when Facebook launched the profile wall. That you've continued to find new things to mine in the social web points at its neverending becoming: that is, making things online and sharing them and having that conversation changes so much so frequently, is always changing.

There has always been the social aspect of the internet, but, to me, that's what seems to have taken over. Well, not just for me, but I think with everyone. The internet is now just for news, looking things up and telling everyone in the world... something. And then seeing what everyone else has to say. I feel like it used to be more about pure exploring and we were all hunters, unsure of what we were even looking for. This was when exploring the web was a special thing, when you could just look through insane found websites for hours and comb through the outer links and find true secrets of beauty and weirdness.

The internet doesn't have that in the same way anymore; it's no longer the wild wild west world wide web. It's kind of like Starbucks bought it and all effort is really just put towards people's Facebooks. The craziest links you can find are found by Buzzfeed and turned into clickbait. Community-based threads don't have the power they used to anymore. It's all a bit watered down imo. Of course, there are exceptions, but overall, it doesn't have that same special magic. But Instagram might have that magic…. I love finding Instagram secrets. On Instagram, I can go through hashtags for days and find things unlike I've ever seen before.

The real internet exploring is there for me these days. I wish IG would let you search multiple hashtags or even just captions that aren't hashtagged. Or by color. But maybe it's because you have to work for searching that it remains a bit elusive and precious. 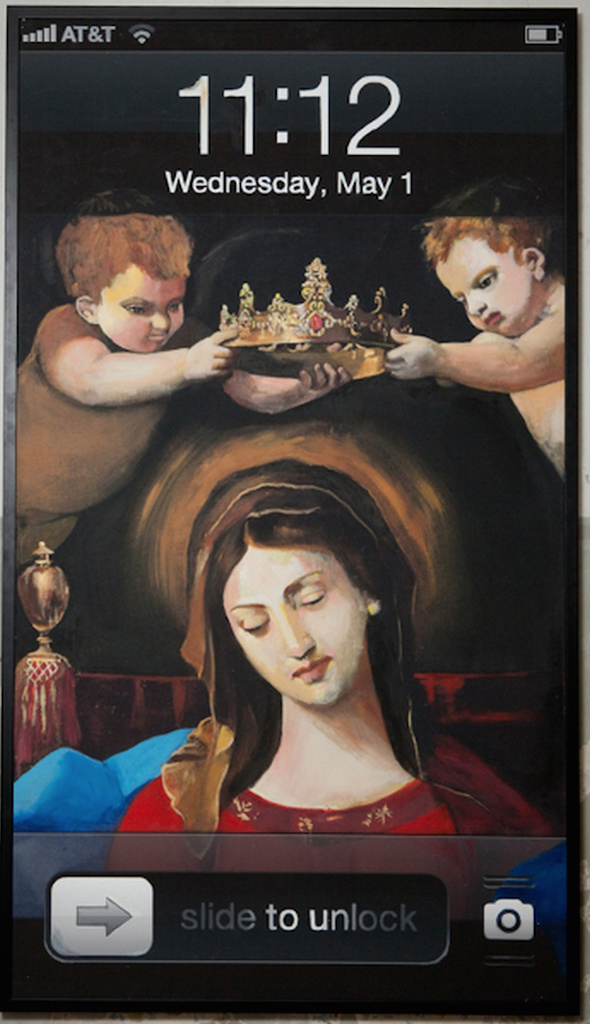 You're always online, but you're also often in your tightly-apportioned Nolita studio making paintings, perhaps with CNN on in the background and the device on elsewhere, but still more or less alone making marks on canvas. In a way, this is a very traditional painting practice, and yet the subject-matter with your new work seems to function in relationship to fan communities, artworld and pop? And the subject of the old works seem to involve the shifting of a paradigm for painting away from the window on the world, and toward the screen?

Last year, I did a show at Motelsalieri in Rome, and all of the paintings I did for this show were direct juxtaposition between old master paintings and current day technology. I liked these paintings, but they suddenly became too one-to-one for me, and I decided that maybe it's better to just keep the internet on the internet, for now at least. As much as I was and am still trying to keep my painting practice separate from my interweb life, they're very connected. I'm still interested in correlations in art history and contemporary living, but I wanted to make it more about pure painterly painting.

For the last year I've been creating large scale paintings about the similarities in abstract expressionism (specifically Willem de Kooning) and anime (specifically Sailor Moon). This all started from this gif I made in photoshop:

And from this, I've now made an extensive series of these paintings. But they're all composed in Photoshop, and then I project and draw and paint and build layers over a few weeks until they are beasts. Here are a couple of them: 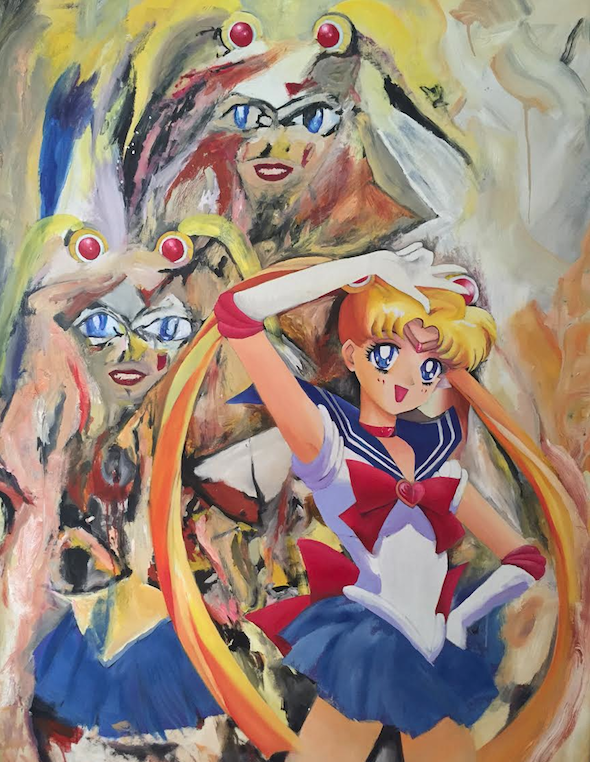 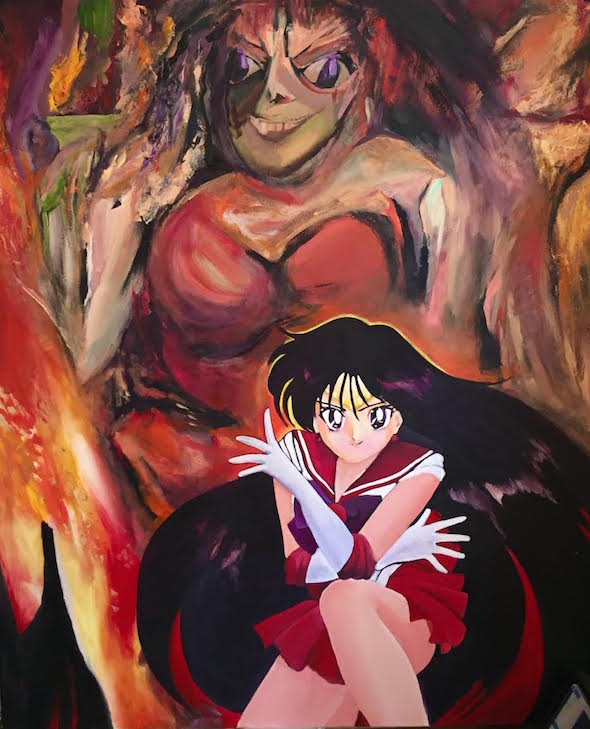 As for fan art, all portraiture is fan art. But, I did also send these to Sailor Moon fan art pages, and I'll tag these on Instagram #sailormoon. They'll say "I love this." It's just a very supportive space, any time there's a fan posting anything, and these are in no way degrading the characters.

I've been really enjoying painting these, and now, I'm moving into even more into abstraction with them. I've never painted like this so it's very fun to explore. I'll keep you updated.

The first html I ever customized in the slightest was my xanga page in high school. I didn't think of it as a creative move at the time, but some of the pages I made were sick—I wish I had screenshots.

I went to Pratt, studying painting and art history.

For a living, I am an artist.

When I was in college—for all four years—I did a work study job as a lab monitor in the computer labs.

When I was a sophomore, I interned at SculptureCenter in Long Island City.

And then, when I was a junior and senior, I started working for artists as an assistant.

That lasted for about a year after I graduated, and then, I was lucky enough to be able to support myself just via my own work. Oh also, right after I graduated—I made mini paintings for FAO Schwarz dollhouses. That was a good job tbh. 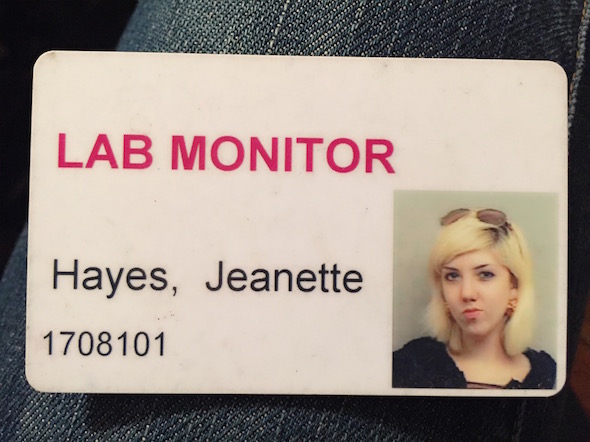 Right now I have an iMac and a MacBook Pro. The desktops on both are disastrous. The laptop is a bit more organized, but only because my startup disk is almost full, so I keep having to clear it out.

My actual desktop that my computers sit on is usually pretty tidy: usually lots of papers around though lol. I keep my computers in the middle of my painting studio so I spend a lot of time very close by even when I'm away ;) 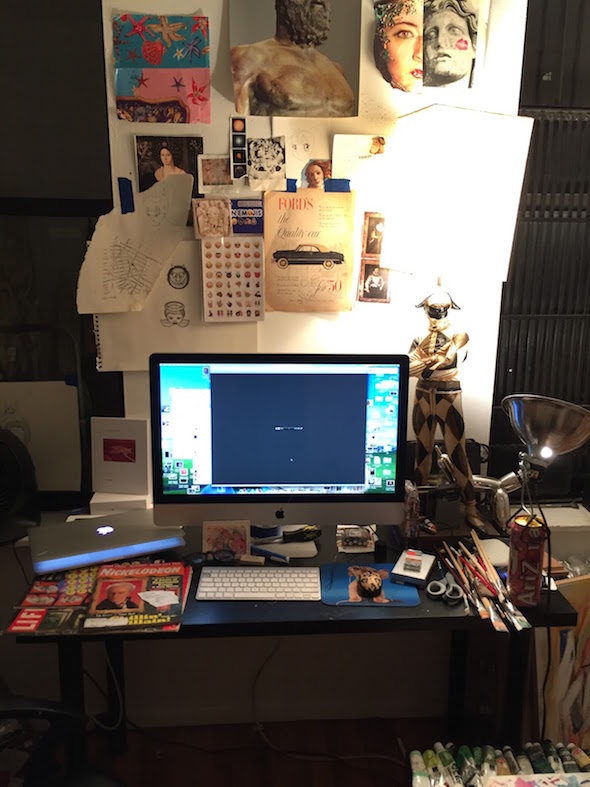