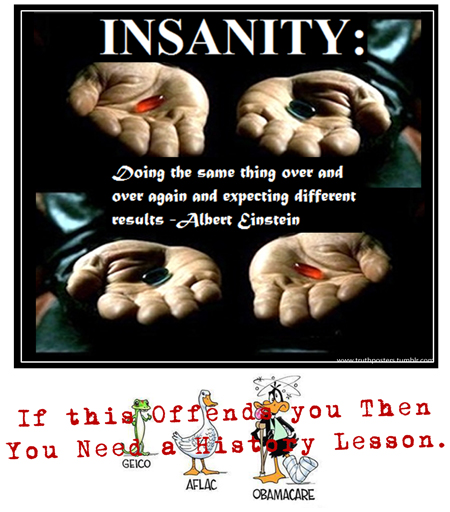 ZK: Let's start with your Theorist works, widely known for their circulation on The Jogging, and, from there, their secondary, unintended circulation on actual far-right and conspiracy theory-oriented Facebook and Tumblr channels. These image macros take up typical conspiracy theory grist (i.e. Chemtrails, Obama, Osama, etc.) but confound conventional interpretation via intermix of language and image. The circulation has been widely commented on; once picked up by a fringe Facebook group, the photos erode these groups' message-making ability. Their composition not as much. As someone long interested in conspiracy theories, their verisimilitude is what first interested me. So, I wanted to get into your methods—how are these composed and what are your research touchstones?

EMS: I became fascinated by these image macros in the summer of 2013 when I'd see the occasional one pop up in my Facebook news feed. Besides content I was also hooked by just the sheer number of them. The people who would post and share them would do so ad nauseam, and it was never just one conspiracy. I began following the same FB pages as they were and saving the jpegs to a folder on my PC that now contains over a thousand macros. 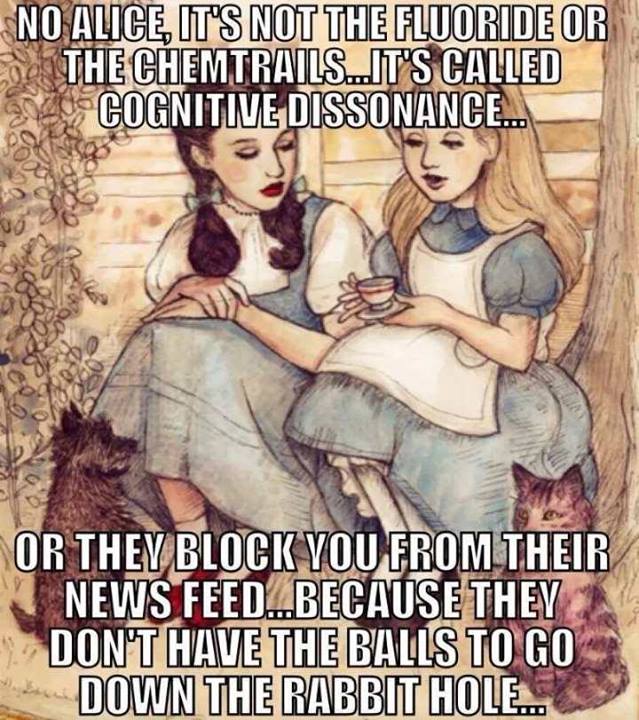 With mine I'd base the layouts off of just one or two of the originals to get it looking as close as possible. Almost always with a black or white background, some red thrown in there. Only a handful of fonts are used—Impact, Times, Arial Black, Eras Bold ITC, the occasional typewriter- or stencil-based one. The logic of the macros often followed the formula of paralleling two images or magnifying one to expose some heretofore unaccepted truth—image X paralleled with Y to point out that they are actually one in the same Z, or, image X is presented and magnified to show that it contains Y and therefore X is actually Z, etc.  There's this manic connection-making like in the darker parts of A Beautiful Mind. If something looks like something else then that is proof enough. There is no such thing as pure coincidence, and that's a hallmark of paranoia.

That's the visual language I wanted to emulate.

And the content? These images are so well-studied, with regard to buzzwords and prevalent anxieties, but not necessarily those exclusive to conspiracy theory-oriented fringe communities (i.e. your references to the death of Brian the Dog from Family Guy, a popular animated television program on Fox).

For content, Brad Troemel and I were looking at a lot of drawings on deviantART and similar sites. The way the macros deal with people and events reminded us of fanart and fanfiction. Whatever the subject matter—Tesla cover-up, crisis acting—there was always the suggestion of a fan-fictionalized version of history. Regardless one's position, a fan-fictional account of an event is either being told by a deluded theorist, or has been propagated since day one by the lamestream media, the NWO, Obama, etc.

I read up a lot on chemtrails1 and false flag acting2; they are my favorites probably because they were new to me. Most of what I read online is on forums straight from the believers themselves. They write with such an urgency and alarmist snarkiness that is infinitely fascinating. In researching chemtrails I came upon this very long email that details methods of herbal detox one can do at home to rid of the nano-particles DARPA and the global elite are having sprayed on us in order to read our minds. I still go back to that one. 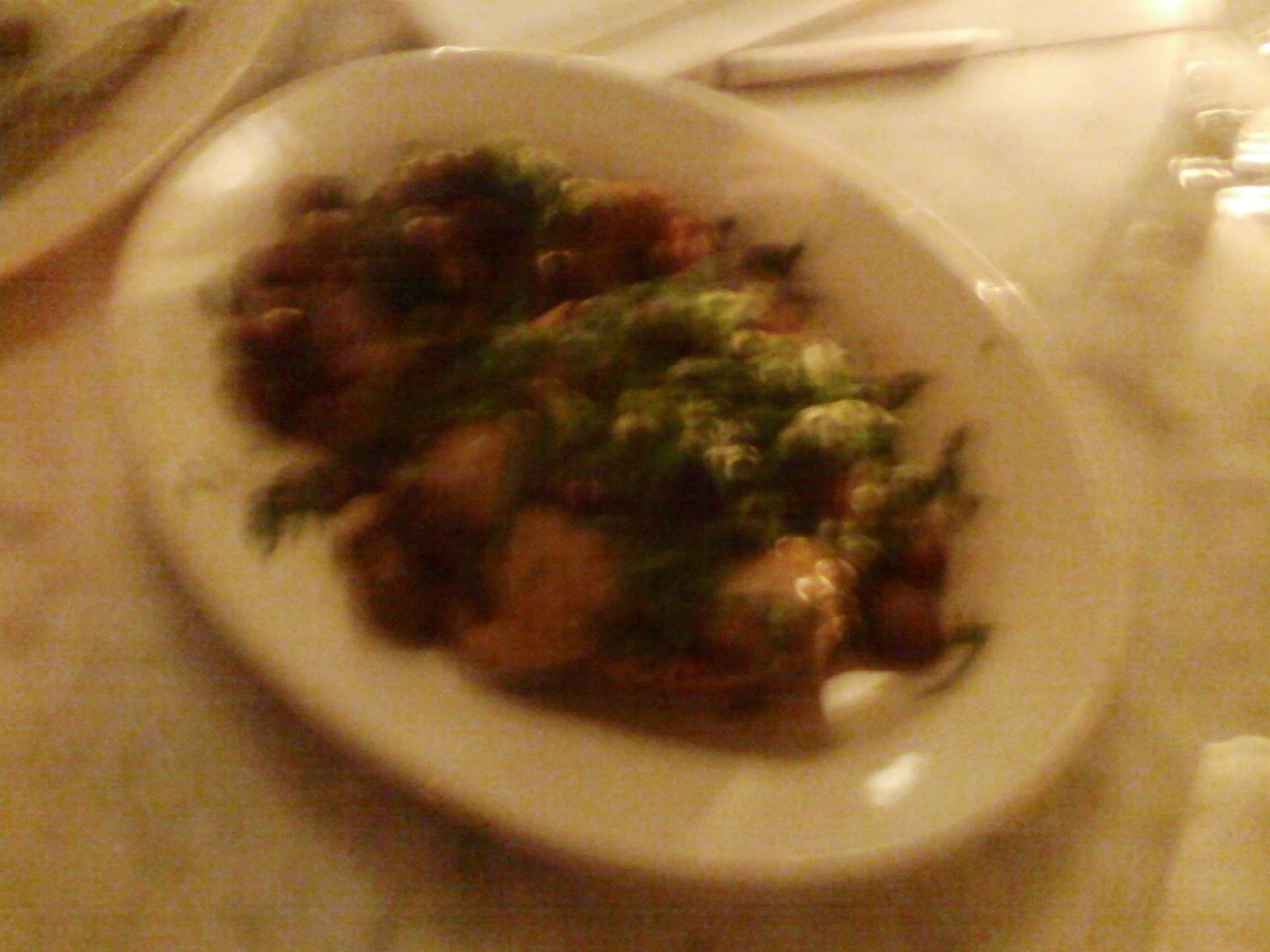 With that in mind, I wanted to ask you about hate-reading. The internet has given us immediate access to much of its content, mindless and otherwise; hate-reading proposes a dissenting, rather than embracing consumption. I think a lot about it and its benefits and drawbacks. Benefit: field analysis of an idea in a given moment. Drawback: an ineffective/false sense of oppositionality. The Edward's Kitchen Tumblr, which picks up a personal blog aesthetic, detailing experiences in NYC food and cooking, paired with 'poorly-shot' photographs, and Excerpts by T. Kaczynski, which reproduces, in automated scroll, sections of the mailbomber's manifesto seem relevant here.

I guess it's something I think about from time to time. I definitely do it a fair amount. EK was born from a place of hate. I love food, and I love cooking and dining, but aestheticized foodie blogs make me sick. My move to New York definitely made me more aware of that culture. EK was my love/hate letter.

With Excerpts it was different. I've always had a soft spot for Kaczynski. There's a big luddite in me that wolfed down Industrial Society and Its Future with a fucking spoon. It reads like a religious text—like Ecclesiastes. There's a terror and fatalism to it delivered with the same self-righteous tone common among those who think they are predicting the future. Parts of it are excitable nonsense but other parts scream true.

I think about paragraph 173 a lot:

When I made Excerpts I was thinking about Industrial Society's dissemination. In '95 Kaczynski sent his manifesto to media outlets and said that if they were to print it then he'd end his mail-bomb campaign. If not, then he'd continue. After some debate The New York Times and The Washington Post ended up printing it. But of course, it was this triumph for Kaczynski that led to his downfall. His brother David recognized the language of Industrial Society from his past correspondences with Teddy. David alerted the FBI and soon after they captured Kaczynski. 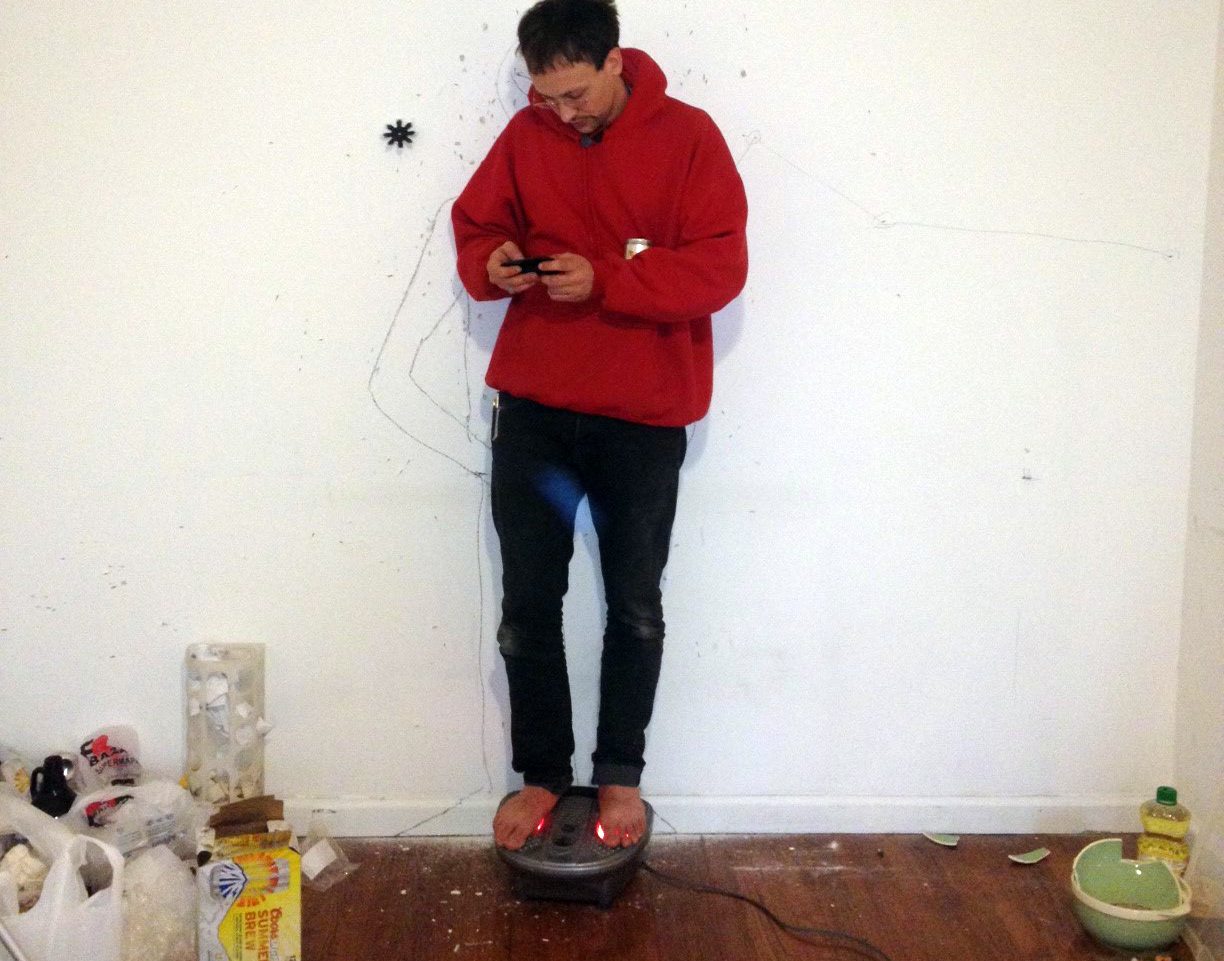 I had the pleasure of attending an evening of poetry featuring yourself, Bunny Rogers, and YouTube guitarist Joey Nikles—you read your writing, Bunny from her newly-published collection, Cunny, and Joey performed original and cover songs of what I could best describe as late-90s mainstream alternative rock. Columbine was the vibe, with the 4/20 date, certain set dressings, its invocation in some ephemera at the event, and teen misery in the poems. And I had this really generative, split feeling as to whether what I'd seen/heard/read was total war on, or intense sympathy with some middle (of the country, class, taste), poetry as a form, and language (branded, crudely sentimentalized, banalized). On this note, I'd also be interested in your position on the broader Alt Lit community, and your work with Bunny.

I'm not sure I have a good answer. I'd like to say there was both war and sympathy. I can't speak for Bunny but I know for myself, I tend to approach writing with both. I have a love for words and clunky syntax. I like rhyme and dumbness. I think late-season episodes of Space Ghost Coast to Coast are pure poetry, and the language of Benjy's chapter in The Sound and the Fury is beautiful.

Bunny and I found Joey on YouTube one night. We were searching for covers of "Five Steps" by the Davenports, the ending song to the TV show Intervention, and he popped up.  We love that song, and addiction is something we both think about a lot. Joey's cover was completely genuine. We contacted him to perform at the reading, he agreed, and he drove up from PA to accompany us. I didn't want to interfere with his performance. I wanted him to do his own thing just as Bunny and I were doing our own things. He also covered NIN's "Help Me I Am in Hell" and performed two of his original songs.

So far as "Alt Lit"—my exposure to it is minimal. I've read some stuff online. I was morbidly disinterested. This collaboration with Bunny began when we met online in 2009. We found each other because we were both obsessed with awareness ribbons. Our practices at the time revolved largely around them. I'd been collecting the magnetic ones off cars, Bunny had been making them from fabric. We'd found a kinship in them.

I made Powerpoints recreationally as a child, I suppose that was the beginning.

Virginia Commonwealth University in Richmond. I studied painting and printmaking.

What does your desktop or workspace look like? (Pics or scrnshots pls!) 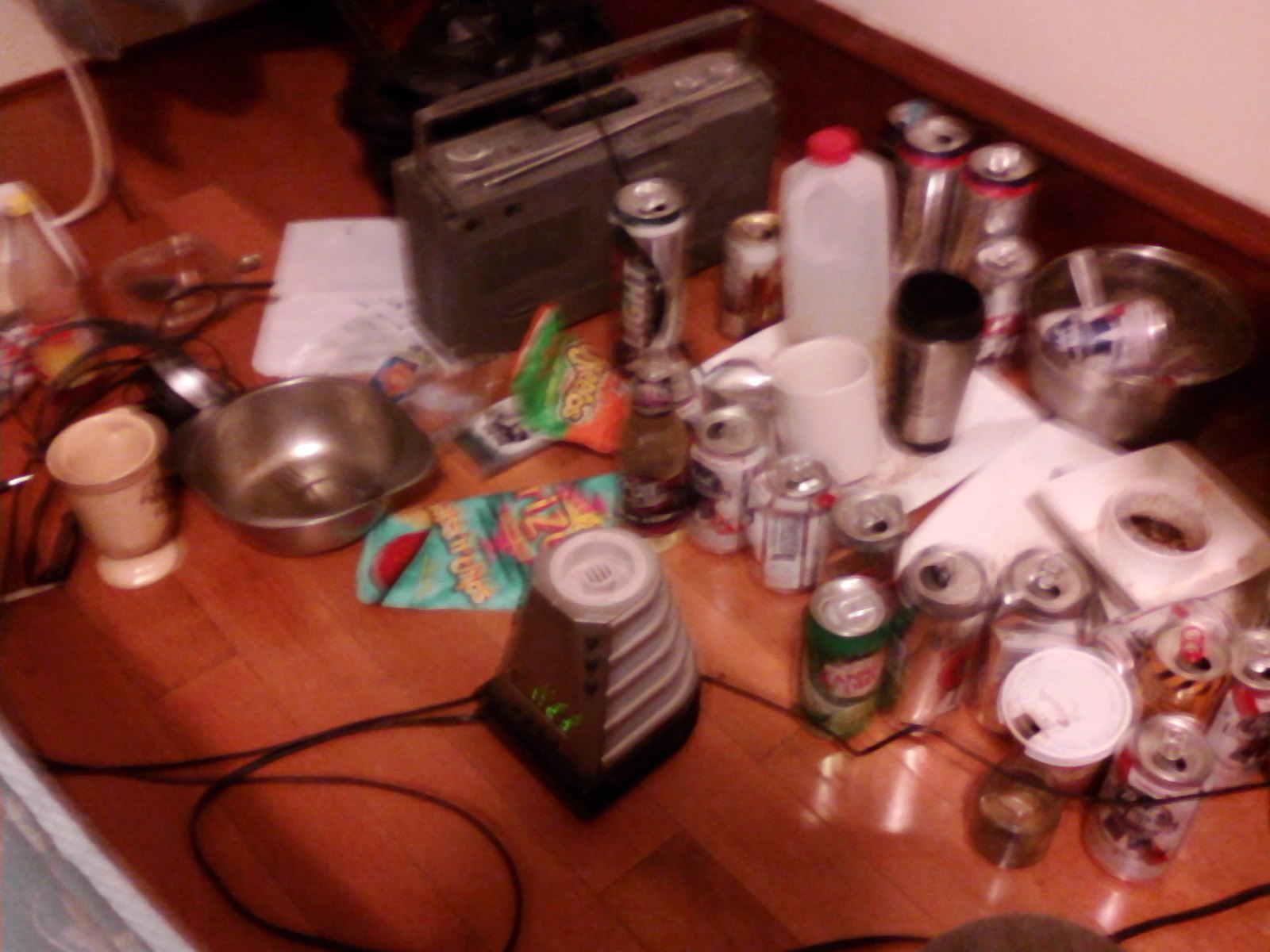 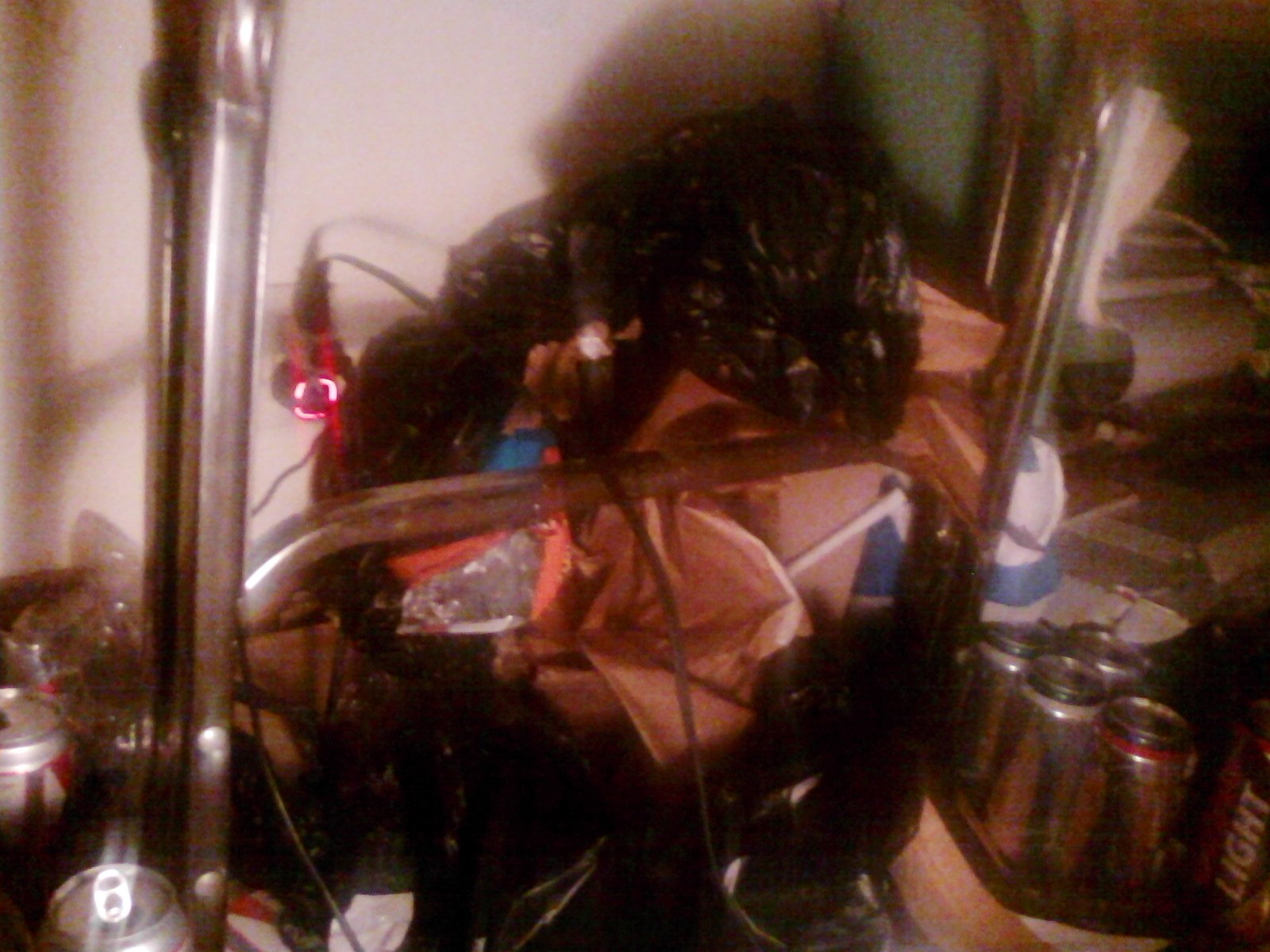