I remember when I first saw the videos you were making in 2012 while you were at Syracuse, and I recall feeling as though you were imitating a "bro net art aesthetic" as a way to critique it. For example, the trailer for your exhibition "Young Money" (above) includes a shot of you holding cash, a rotating pizza, and a floating rendering of a bong. But now, ironically, that has actually become your signature style and when I see others making videos in that vein, I think they are copying you. How do you feel your video style came to be, and now that you've been immersed in it for some years, why do you use the formal elements that you do?

I want to defensively say "I wasn't copying art bros; they're copying me!" but I really don't think there is any originality after the internet and in some sense we subconsciously or directly retain emotional and aesthetic affects of everything we see. I wasn't thinking it was particularly "bro-ey" style that informed works like Young Money [the eponymous video work of the exhibition by that title]...Before I discovered "postinternet" art I was watching a lot of amateur YouTube videomakers like Wendy Vainity, Epic Mealtime, and random videos of boys performing pranks and dares, so there were some definite influences from vloggers and pro-am producers. I noticed that people actually enjoyed performing "bro" ironically, and I wanted to channel that parodic pleasure. It can't and won't be about youth and fantasy forever though. I'm currently working on a 15-minute video about equality that bastardizes film and documentary tropes...

Bad videomaking seemed sincere, effortless and convenient for the net. My older videos were inspired by fan culture on YouTube and could be lumped in with screen-recorded videos, unboxings, and reviews made by young videogamers. A direct aesthetic influence was my friend Daniel Waldman who made videos for fun with Windows Movie Maker and posted every one of them on YouTube without caring whether people thought it was art or not.

@mikepepi asked on twitter recently, "What is a net art bro anyways?" Since you play so much with these tropes, I wonder how you would answer him? My fear is that it is easy to hear that term and not associate yourself with it. And Mike is right, no one has really defined the term, kind of letting a lot of people off the hook to not look inwardly and correct conscious or unconscious misogynist behaviors.

Here is my answer:

Are YOU an Art Bro? 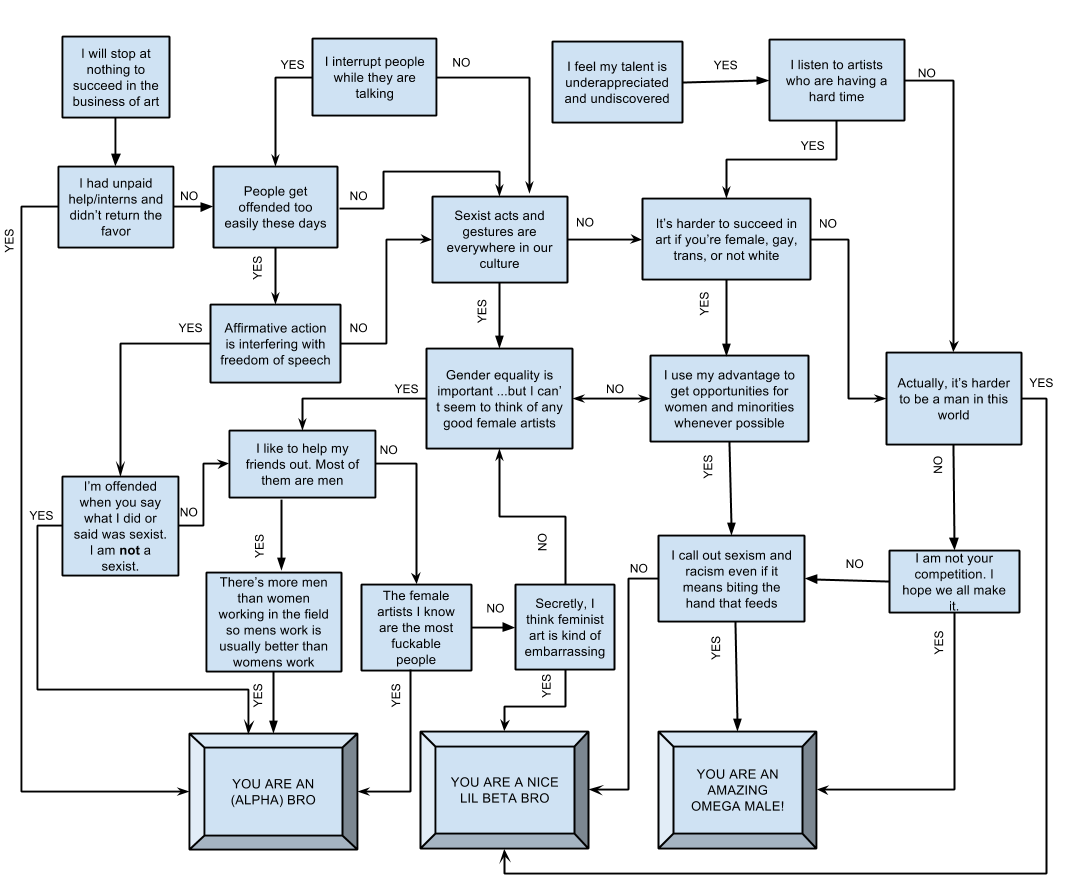 //You are an art bro if you're a man or a woman who thinks the art world is equal as is, and that there are no internal politics that exclude certain artists from participating and being as visible as you are.  The art bro mostly validates the voices and work of men, in the same way men quote the words of other men who quote the words of other men–patrilineage produces patriarchy. Art bros don't believe in community or solidarity.

//To be more incendiary, I will cop pickup artist terms to compare art bros to the idea of an "alpha" or a "beta" male–terms created by the male seduction communities and men's rights blogospheres ("manosphere") to push insecure men to honor traditional ideas of masculinity. That's gender, it's always a self-conscious and precarious performance anyway. ;)

The alpha art bro is shameless, confident, sociopathically opportunistic, and defensive with professional critique. The beta may be polite and eloquent but he tip-toes around being a bro; he feels entitled and competitive to the accomplishments of art bros and schmoozes with who they perceive to be art power while crying bitter tears of rejection. Omega males do their own things; they don't believe in tribal feudalism, observe and get their opportunities while the alpha and beta dudes are pissfighting. The last "type" I didn't include in the flowchart is the ~chill bro~ with a bit of Peter Pan syndrome. He might smoke too much pot or be late all the time. He's apathetic to everything except his pleasure and just cruises on, working when he feels like it.

As you mention, you're directly influenced by popular internet culture and tropes. Your work plays with and against these tropes through imitation and exaggeration, but I have also noticed a personal narrative element that subtly moves through your work, often hidden beneath layers of humor and critique. Can you talk about your use of personal narrative and performance within your works? And how and why you tie that in with your interest in pop net?

I think pop experiences and ideologies contain universalities that people instantly latch onto or reject... in that way pop culture is unexpectedly political and persuasive. There are pleasures in the escapism it offers, such as karaoke and cover songs as affinity... There's a personal suturing to a text for its aspirational or fantastical qualities or how one ideologically aligns with it, just as there is a parodic pleasure in performing things you despise but indulge in ridiculing (Recall Alanis Morissette reperforming Fergie's My Humps in a sad way or James Franco making Bound 3 in a homophobic way?). Then there is a fan affinity or even a meticulous labor in the way people supercut moments of their favorite boyband member or even make careful tutorials of how to best use a certain software. This is all fandom; I personally love observing how people digest it and spit it out and right now, it happens to be how men define themselves in dialogue with popular ideas of masculinity, sex, romance and body image. It's a shared obsession.

I was born in Canada and grew up in Hong Kong; I don't think I noticed how powerfully syndicated American media (and subsequently, cultural values) were until I moved back to Canada and noticed there were Canadian content restrictions. For me, the personal subtext is a way of dealing with mediated fantasies and ideologies that don't apply to my condition or deliver ever, in real life.

In your piece "2011" you made for Sleek magazine, you keep the pop track but the personal narrative comes through a lot more clearly and directly than in your other work, as you narrate a story about your roommate sexually assaulting you. You do well at describing the banal reality of this act—that it can seem almost normal or expected for it to happen. You even start off by saying "Worse things could have happened to me," as though to negate the severity of the actual act and to kind of pre-emptively inform the viewer that you know it's not "that bad," to anyone who might say to you that you "let it happen." As a woman artist making work at times about your personal life or feelings, do you feel you are at liberty to express yourself the way you want to, or do you feel you have to couch your feelings/thoughts in a way to make them more digestible for an audience?

I said "not that bad" because people generally think rape is the worst thing that can happen to a woman—that it makes a rape survivor a "damaged good" or irreparably traumatized. The apathetic tone or blocking out of emotion was really how I dealt with it, I didn't get paranoid or break down afterwards... just very slowly became angry over years when I realized that my refusal to have sex was blurred and ignored by someone I had considered a friend. This article by Charlotte Shane best describes the realization and banality of living down sexual assault, and perhaps resounds more closely with date rape or assaults from exes, husbands, friends, acquaintances etc. One is way more likely to feel they are creating unnecessary (negative) attention around themselves when they call someone they know out for sexual violation, and that's how a lot of assault from people we know goes unreported.

What I learned from reflecting on all this is that it's possible for people to be regular nice people who open doors for the elderly, etc. AND also emotionally manipulate or pressure on people to have sex.

I am comfortably embarrassed with making these parts of my personal life public. I, like you, enjoy externalizing shame as a means of drawing empathy or discomfort about what people think are black-and-white social issues. I have a deep belief, like Emily Vey Duke and Cooper Battersby, that art is for empathy and asking questions about human nature. Technology is only a means to an end of doing that.

I made Photoshop brushes and digital collages on DeviantArt in my teens. I was a goth-turned-emo kid and I remember buying a domain called "demonicseduction.tk" to show off my digital art. I made posters for local hardcore shows in Hong Kong. Here is one I scrounged up: 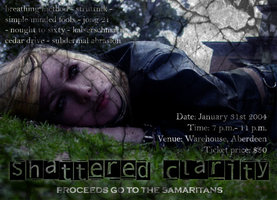 I didn't know about contemporary art until my second year of university, so back then this type of work was my sense of what design should be. I wanted to be a graphic designer.

I did a HBA in Communications, Culture, Information Technology at University of Toronto, and a MFA in Art Video at Syracuse University.

I think institutional support is really important for emerging artists but at the same time it makes them less likely to rebel against pre-existing schools of thought or market models.

I do freelance work and part-time teaching. I've done some gallery admin and served ramen in Hong Kong before.

I usually working from my dinner table. :D 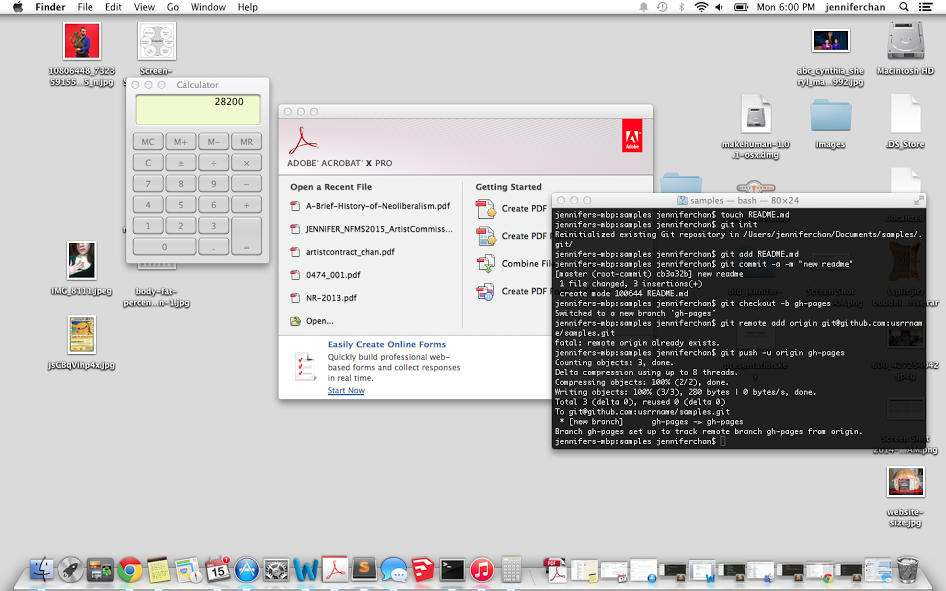 More about Jennifer Chan can be found at http://jennifer-chan.com/ or by following @jenninat0r on Twitter.