'Phillip Seymour Hoffman Died, Are You Over Me?'
By Tracy Jeanne Rosenthal 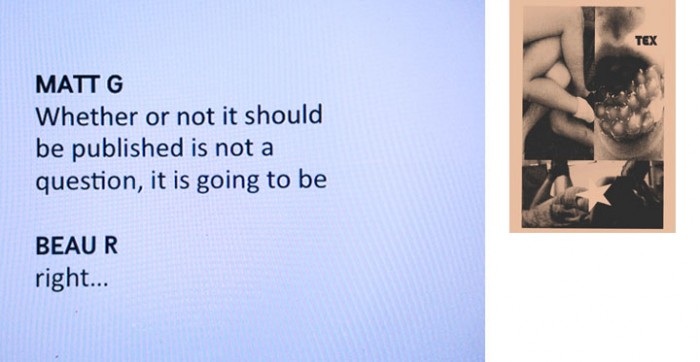 In my brief appearance in Beau Rice's new book, TEX, I tell the narrator he lives in a perpetual state of "topping from the bottom." I submit the whole book as further evidence. Compiled from about a year of the writer's digital correspondence, TEX brandishes a kind of authorial whip only the masochist understands. It is an ultimately relational authority, diffused into multiple voices of friends, potential Craiglist sex partners, and mostly "Matt G."

"I'm around today if you want to connect and share," Beau R not un-seriously offers Matt G. The line that follows is a time stamp, a full day gone by with no reply—just one example of the pathos the text message form can pack. Rice's ultimate success is making the intertexual digitalscape translate for the page: poems shaped like butt plugs, bracketed descriptions instead of emojis (ex. "[kiss face]"), YouTube links—including Christian Marclay's Telephone—revealed as their URLS, iPhone photos, quotes from the relevant likes of Michel Foucault, Ryan Trecartin, Anne Carson, and Liz Phair, even celebrity deaths are volleyed, made metabolic, used and abused.

Who knew the epistolary form was so ripe for a queering? In many ways, the exchange of seduction and wordplay is as old as Plato's Phaedrus. In many ways, this book continues Alt Lit's genre-defining digital-chat trend (and suffers as it suffers—for being pretentious). Yet in many ways, its precedents aren't Alt Lit's lonely, manipulative boys but the lonely, manipulative girls of Chris Kraus's I Love Dick, Frances Stark's Osservate, Leggete Con Me, even, dare-I-say, Lena Dunham's Girls. Which is to say, what queers have always been better able to say (and straights have always known) is that sex is often about unhooking gender, and that both are really just words. "I'm so sick of ass connoisseurs who think bold fags have no feelings." Honey, amen.

Rice's attention to the textures of texting demonstrates what wordplay really makes possible. A phrase conjures a character and a set—not a subject speaking, but an amalgam of the roles they play. Beau R re-mixes a Catullus poem into a lover's guilt trip; Matt G responds, "I'm telling the whole school about your embarrassingly intense emoticons."  Digital missives descending from the would-be ether, these performances seem utterly un-tethered from the human body. Yet, echoing the subterranean field of leaks that emerge from communication technologies, all this chat is countered with visceral descriptions of the body's fluids: viral boils, pussing zits, piss, shit, and cum. "Beau R: "i'm only able to text this much cos i'm on the toilet. Matt G: "Im eating. It comes in my mouth and goes out your ass." Here is the physical place us materialists are always looking for to name what info-tech might be doing to us. Besides guarded servers and fiber optic cables, it's where emotions live inside us, where we see them erupt from our bodies, and, where, to our humiliation or delight, the feedback loop kicks up once more.