First Look: Miranda July - 'Somebody'
By Lauren Cornell
Miranda July's messaging service Somebody is presented as part of First Look, the New Museum's ongoing series of digital projects, now co-curated and copresented by Rhizome. Because the app relies on face-to-face interaction, the New Museum (along with other sites around the world) will serve as a "hotspot" for users of the app. 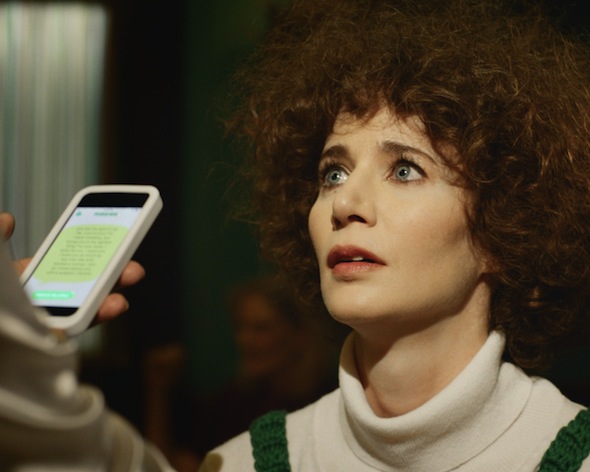 In Miranda July's 1998 experimental video The Amateurist, a young woman with a jet-black pixie haircut in a stiff professional dress (played by July) studies a TV set displaying a fuzzy surveillance feed of a blonde woman (also played by July), who is squirming in the corner of a small cell. While speaking to the camera, the pixied professional reels off all sorts of absurd quantifications and explanations of the surveilled woman's movements. She maps her emotions to a numbered grid, psychoanalyzes her behavior, quips about her habits, and consistently runs roughshod across boundaries between doctor and patient, subject and object, viewer and viewed, public and private, in what is ultimately an excessive examination without any apparent justification. Since the video was produced, July's body of work has expanded from video and performance to include online works, novels, and feature films—all of which attempt to dissolve boundaries between fictionalized personae, or between the artist and her audience. It's significant to note that July started out in the experimental-video scene of the '90s, since so much of her work is about how the adaptation of new technologies affects us on a very personal level. Regardless of medium, her works reflect how broad social changes inflect our most intimate relations. 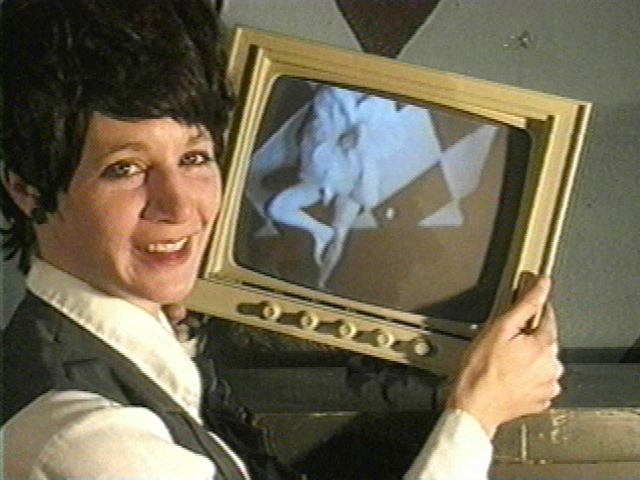 July's new iOS application, Somebody™, which the New Museum is proud to copresent as part of a distributed international launch with multiple international partners (see list below), continues these profound investigations into the ways technology mediates our interpersonal communications.

July describes this new messaging service in the following way:

"When you send your friend a message through Somebody, it goes—not to your friend—but to the Somebody user nearest your friend. This person (probably a stranger) delivers the message verbally, acting as your stand-in."

Somebody is available as a free download via the iTunes Store, and somebodyapp.com can be visited for an overview of the work.

An accompanying video by July will also be screened in the New Museum's Lobby. The artist will speak about Somebody at the New Museum on October 9 (details to come).

• You can choose actions and directions for your stand-in, such as [cry] or [hug]—or write your own.
• The recipient always has the option of declining a delivery before the message is set in motion, if now's not a good time.
• The first sentence of the message is automatically "[Recipient's name]? It's me, [Sender's Name]," thus reminding the stand-in to assume the identity of the sender.
• Somebody uses GPS to locate your friend, then presents you with photos and performance ratings of nearby users so you can choose the best possible delivery person for your message.
• If there's no one nearby, you can choose to "float" your message indefinitely. Users interested in being a stand-in can browse nearby floating messages and pick one to deliver.

Somebody was created with support from Miu Miu. Official Somebody hotspots so far include Los Angeles County Museum of Art (with a presentation by July on September 11); the New Museum (presentation on October 9); Yerba Buena Center for the Arts, San Francisco; Portland Institute of Contemporary Art; the Walker Art Center, Minneapolis; and Museo Jumex, Mexico City. Museum-goers are invited to send and deliver messages in these spaces where there are likely to be other users.

Miranda July is a filmmaker, artist, and writer. She wrote, directed, and starred in The Future (2011) and Me and You and Everyone We Know (2005), which won a special jury prize at the Sundance Film Festival and four prizes at the Cannes Film Festival, including the Caméra d'Or. July's fiction has appeared in the Paris Review,Harper's magazine, and the New Yorker; her collection of stories, No One Belongs Here More Than You (2007), won the Frank O'Connor International Short Story Award and has been published in twenty-three countries. The nonfictional work It Chooses You was published in 2011. In 2000, July created the participatory websiteLearning to Love You More with artist Harrell Fletcher, and a companion book was published in 2007; the work is now in the collection of the San Francisco Museum of Modern Art. She designed Eleven Heavy Things, an interactive sculpture garden, for the 2009 Venice Biennale, and in 2013, more than a hundred thousand people subscribed to her email-based artwork We Think Alone (commissioned by Magasin 3, Stockholm). In 2014, she debuts the audience participatory performance New Society at the Walker Art Center in Minneapolis and launches the app Somebody, a messaging service created with the support of Miu Miu. The First Bad Man, a novel, will be published in January 2015. Raised in Berkeley, California, July lives in Los Angeles.