Hypertext and Destiny: This Twine Could be Your Life
By Grace Converse 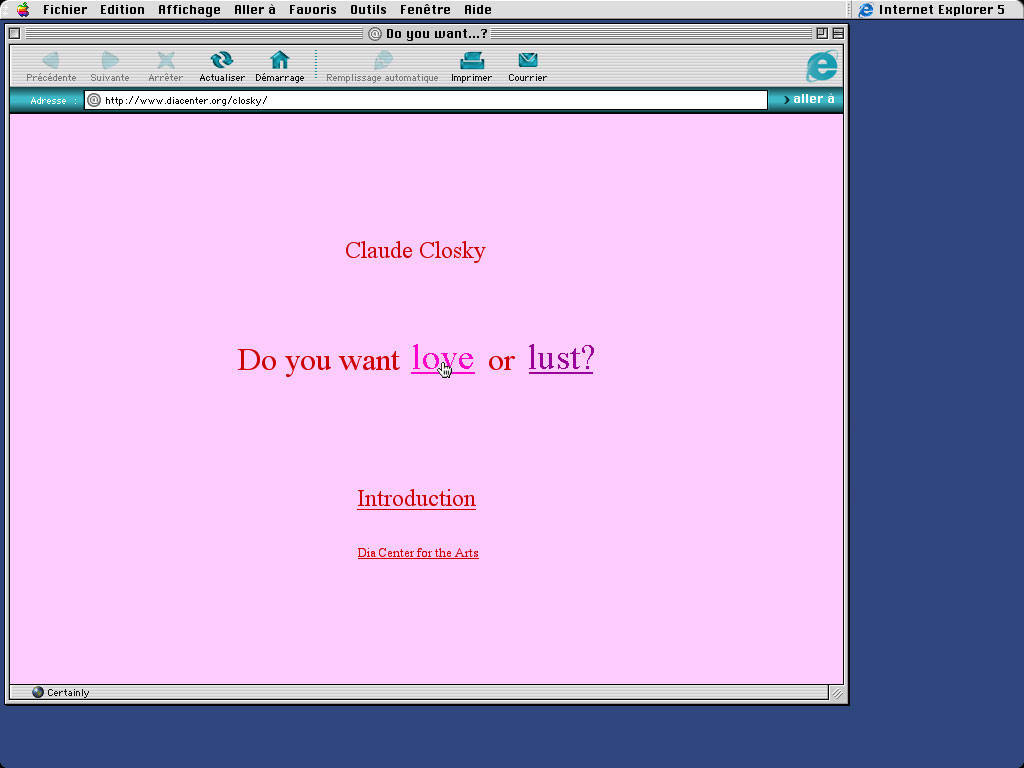 Screen shot from Closky's Do you want love or lust?

Your lover wants to move in, and you have a choice: you can say, "ok, I'll try it for a weekend and then we'll see" or you can "threaten to break up right now."

Then, your boss gives you a compliment. You can either: "say ironically, 'soon you won't be able to afford me,'" or "mentally calculate how much more you will ask him for."

You choose, you choose again, then you choose again. Each time, you are presented with another choice, an either/or. It's impossible to predict the outcomes that either decision might yield, but you choose carefully, expecting that each choice will shape your future path.

This is the sprawling question set of Claude Closky's 1997 Do you want love or lust?, an early web-based hypertext work that draws the user/viewer/player into what seems like a CYOA (choose your own adventure narrative). By making a choice—clicking love or lust—you enter a fictional, and emotional, space where you are the protagonist of this story.

But Closky turns this against you. The questions don't seem to end; each choice you make seems to bear no weight on the next question. This is futile. The questions change, the color of the text on the screen, the color of the screen, but not the context, and not you. You are a protagonist with no agency, no authorship over this unfolding narrative.

Do you want love or lust? could be read as a wry sendup of the promises of hypertext literature, a cultural form of note among early web practitioners in which users used hyperlinks to navigate from one piece of text (other media were also incorporated) to another. Specifically, proponents of hypertext literature often argue that it demands an active reader who shapes their own narrative destiny, if only within a predetermined set of potential outcomes.

In Closky's work, though, the active reader is revealed to be a Charlie Chaplin in the factory, operating a complex apparatus to no discernible effect. Clicking on his hyperlinks will move you forward, but only inside a closed, random system; it seems to emphasize the arbitrariness of decision-making in hypertext literature. Is all interactive fiction equally arbitrary? Or does it, at times, allow users to make meaningful decisions, to experience a real sense of agency?

Ten years later after Closky's work, in 2007, developer and interactive fiction writer Chris Klimas—inspired by the history and potentiality of the click and a fascination for interactive fiction, gaming, and open internet projects—began coding a hypertext development environment called Twine. Twine was released for Mac and Windows users in 2009, with projects easily sharable and usable via HTML. The beauty of Twine was, and is, its ease of use — little stands between you and your ability to express via hypertext.  According to Twine's website, "You don't need to write any code to create a simple story with Twine, but you can extend your stories with variables, conditional logic, images, CSS, and JavaScript when you're ready."

Twines are intimate, deceptively simple game-like online experiences composed of clickable text crafted into modular, recombinant narratives. It stands on the history of hypertext experiences as imagined by Vannevar Bush and Ted Nelson, and brought fully to form on CD-ROM by Shelley Jackson and online by Mark Amerika, but evolves from these works in that it takes advantage of the capabilities of modern browsers and the ideas of a large base of artists and authors.

Despite its simplicity and flexibility, Twine remained a fringe platform with relatively few users for the first few years of its existence. The platform was used primarily by writers as a means to outline stories and uncover potential narrative threads. Though it differed from other interactive fiction software, its identity and utility to writers and artists remained untapped. In 2010, rumors even circulated that perhaps the platform was dead.

Then, in 2012, a shift in Twine's popularity occurred beginning when Anna Anthropy sang its praises in her book, Rise of the Videogame Zinesters as a means to write text-based games without a need to code. In a recent article "Untangling Twine: A Platform Study," Jane Friedhoff describes how, "Within a year, there was a flurry of activity including a formal tutorial by Anthropy in September, a Twine tutorial at a game jam in September, Twine-specific jams in September and October, and manifesto/tutorial by Porpentine in November." Friedhoff cites this as the moment when Twine went from a cultural backwater to being a significant platform for the "marginalized voices" including the LGBTQ communities, racial or religious minorities, and women.

Friedhoff posits that the relatively spare aesthetic and easy programming allowed it to be journalistic and expository, and that Anthropy's specific promotion and use set the tone for the content of a majority of Twine games.  The games' ease of use, creation, sharing, and participation resonated with some marginalized groups whose efforts to either raise awareness of (and perhaps change) their status as marginalized, or to gain strength in numbers, could benefit from the platform.

Moreover, the sense of first person identification that Closky détourned in Do you want love or lust? can be a powerful tool for such groups. Not unlike a LARP, hypertext fictions allow participants to engage experimentally in alternative realities or subjectivities or behaviors. Hypertext users may experience new kinds of freedoms and new kinds of consequences.

Anthropy's queers in love at the end of the world (2013) (discussed here) or The Hunt for the Gay Planet are two very different takes on intimate experiences: one models what you might do with a lover in the ten seconds before the world ends, and the other sets you on a herculean search for a vast (planet-sized) queer community. In one game, death is imminent, a fixed time limit removes inhibitions about performing specific gender roles and lends the work an emotional and polymorphously libidinal charge. In the other, frustrations mount as each turn you take yields no lesbians, no one gay and nothing queer; the sense of isolation experienced by many on the queer spectrum is made achingly manifest.

As the experience of clicking a link is so commonplace, Twine games immediately evoke our day-to-day vulnerabilities and the innate risk of clicking, of being asked to make a decision without a full understanding of what the consequences might be. The subtle simulation of danger and uncertainty in the games parallels the daily risk of individuals who belong to groups more likely to experience mistreatment in society.

To dramatize this, many Twine games serve (like Closky's) to highlight the arbitrariness of the user's decisions, their lack of agency. In Tsukaretablues's Twine We Were Made For Loneliness, you are often given three options at the end of a segment that appear to link to a next part of the gamified story. As you move the cursor over the text it goes from red to black, becoming crossed out and then, unclickable. You realize there is only one option.

Zoe Quinn's Twine-built game Depression Quest (2013), which was made available for free in the wake of Robin Williams' death, uses this crossed out text visual motif to emulate the self-restriction of living with depression; you, the player, the sufferer of depression, think, and know, that when you have trouble sleeping you could "Force yourself to sleep," or "Just close your eyes and let it happen" but the reality is, as evidenced by the only bold blue text on the page, that your only option is to "Go to your computer. Sleep is clearly not happening no matter how long you lay here."The way you may want the story to go is in red, crossed-out text. As a reader and player, you fight to make the best possible choice and hope it gets you through to the next screen. 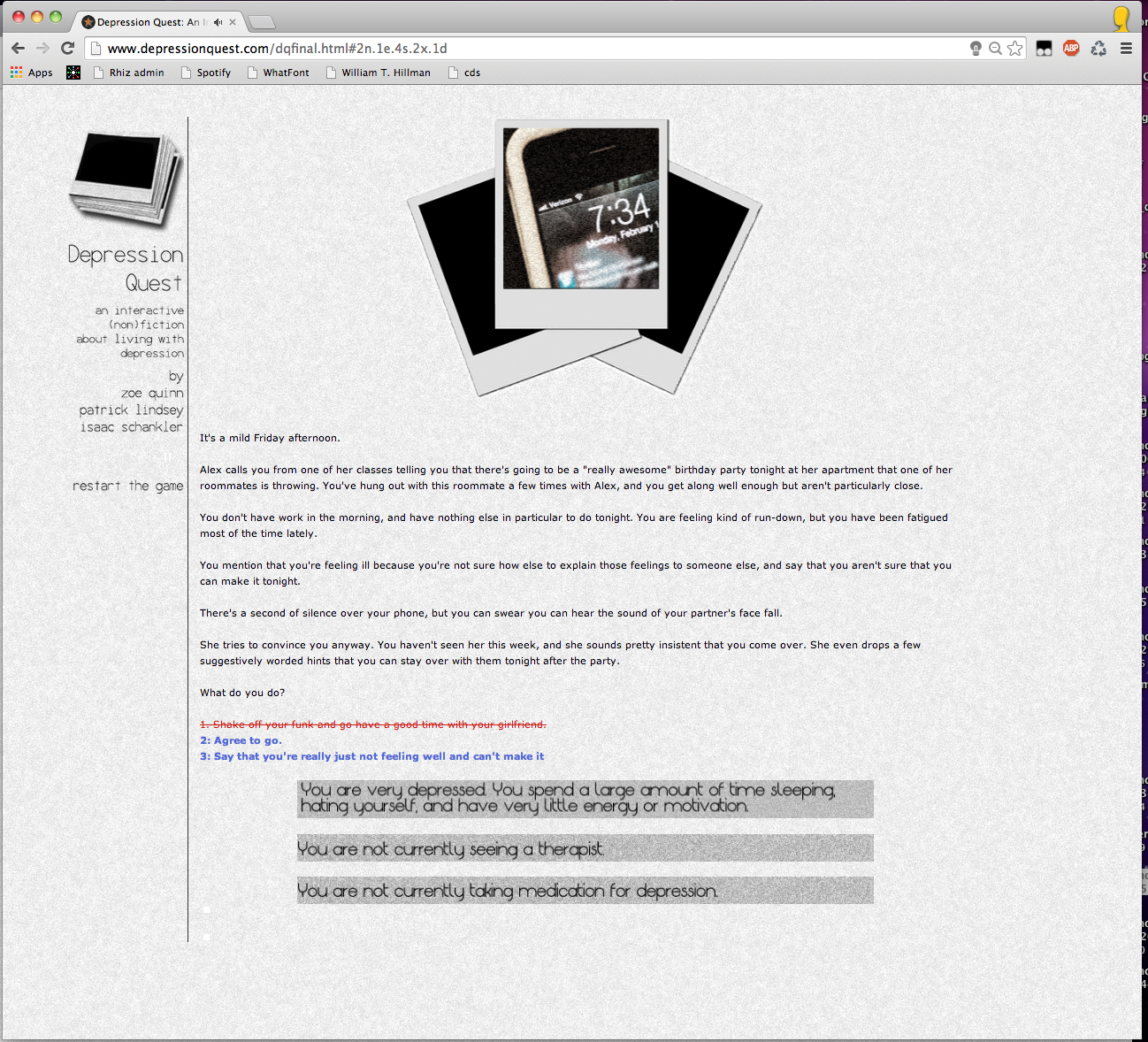 Twine text-based games emulate our limited agency within our daily experiences with work, lovers, friends, art, life, and as such have proven a valuable cultural form for people who, in their daily lives, must work within a limited set of choices. The text, clicks, and roundabout narratives within a Twine game illustrate the anticipation and uncertainty we feel navigating the internet, or life.  You have the choice of what text to click, but no control over what comes from that click. The hypertext of Twine enriches an otherwise ordinary narrative with the innate confusion, messiness, "reality" of the player. They are what draw us in to the narrative, but also a reminder of the narrative's bounds. Each click through a Twine game reiterates what it really means to win: accepting the limited choices at hand and moving forward, trepidations aside.

The mission to create a zine-like culture around gaming articulated by Anthropy, allowing games to be personal and lo-fi, continues to build today, two years after Anthropy's initial proclamation. From February to April of this year, Richard Goodness curated "Fear of Twine," an online exhibition of sixteen Twine games. The goal was not to demonstrate the platform's ease of use, or to promote use within the LGBTQ community, but to show how diverse it could be as a gaming tool. Though Twines are primarily text-based, and often narrative, as you pick and choose your way through one, you feel compelled toward the reward of a successful narrative, the ending you want, hence they are gamified stories. Goodness senses a continuing rise in the indie gaming scene, helped by Twine. "Twine," he says, "seems to have arrived at a point where people wanted more things from videogames, it is accessible enough for lots of people to make games, but complicated enough that people can make interesting work." Just as the photocopied zines made your voice feel heard or the recorded-in-a-garage sound made Beat Happening sound like all your unrequited crushes, the fast and dirty creation and aesthetic of Twine games makes them a perfect outlet for our reverberating, repressed emotions, and for modeling possible freedoms and real world oppression. 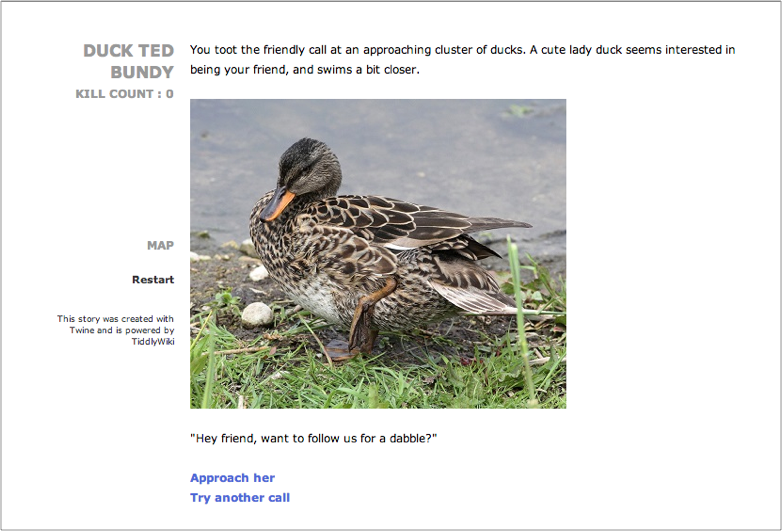