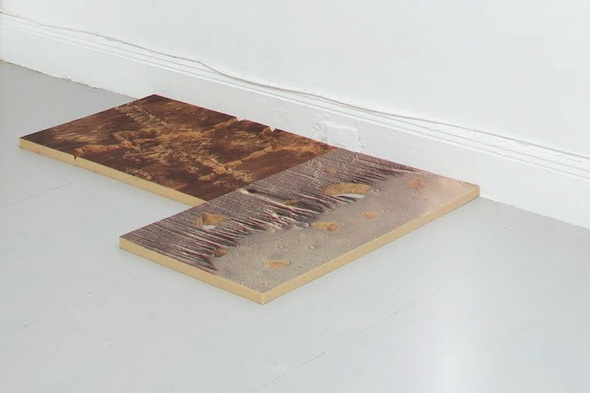 In order to increase survivability in the event of a crash, scientist Charles Yost developed memory foam in 1966 at the NASA Ames Research Center, within walking distance of what would later become the Googleplex. Memory foam holds the mark of any pressure made against it before slowly returning to its original form when the pressure is removed.

Curated by Agatha Wara, ٩١١,000 B.C. was the inaugural show at Grand Century, an exhibition space in an artist's studio on New York's Lower East Side organized by artists Dora Budor, Alex Mackin Dolan, and Olivia Erlanger. The show lasted less than twenty-four hours, opening on Saturday night (March 29) and closing the following evening. The visitor found foam pieces in the first and last corners of the space. 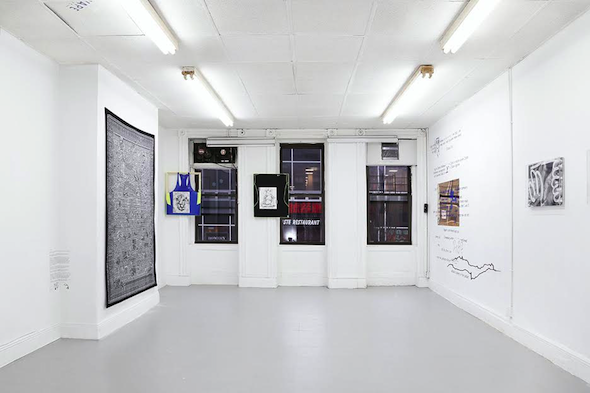 For these two works, Berlin-based artist Philip Zach UV-printed the terrain of Mars and the Moon on a material that calls to mind memory foam.. Looking at them, I wanted to replicate the mattress advertisements where a hand hovers over a vanishing mark it has made. The suggested physicality of this landscape and the familiarity of the foam brings scientific research into the domestic sphere and links the planetary scale with the corporeal through a commodity, producing desire through false proximity. 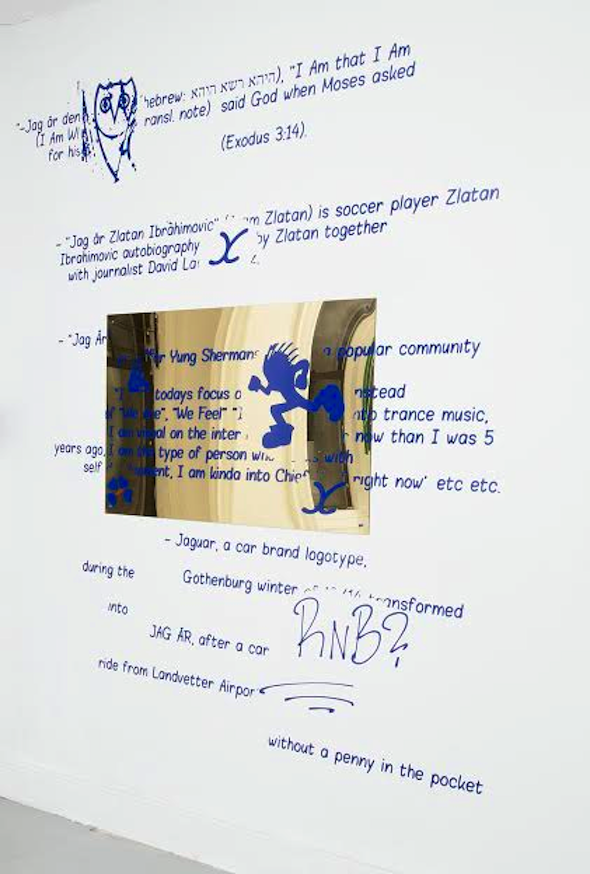 Wara’s staging made viewers ever conscious of their movement within the small space. Though they were positioned to encourage circumambulation around the small space, the saturation of the works did not allow room to breathe. The two largest works, a computer-designed quilt by Amsterdam-based Kareem Lotfy and a text by Berlin-based Ilja Karilampi, were placed across from each other in the gallery's rear. During the opening, I navigated through the bodies to have a clear view of these two works; walking from the entrance, I tripped over someone's foot in order to avoid hitting Oslo-based Anders Dahl Monsen's protruding steel line-graphs and landed somewhere in the back near Karilampi's work, a gold-mirrored overlaid by an erasure of a large blue text that puns on "Jag är den jag är" ("I am that I am").

On the closing day, two of the pieces of memory foam were no longer against the wall, possibly kicked. In the space, the head undulates, and the viewers step back to look at the ceiling, forward to gaze at the floor, bend half way and shake their heads to read Ida Eritsland's text stretched across a corner, conflating universal inflation, Jimmy Carter's Gold Record, and the ripples of historical violence, so many gestures impeding the possibility of structuring meaning.

But what about the crash?

Structural contradictions are vital to its operation.

Did we see it?

Or when we search for "Jag är den Jag är" on Amazon did we mean to say "Jaguar Sports Car"?