(A)non-Proposition: A Conversation with Studio for Propositional Cinema
By Stephanie Bailey 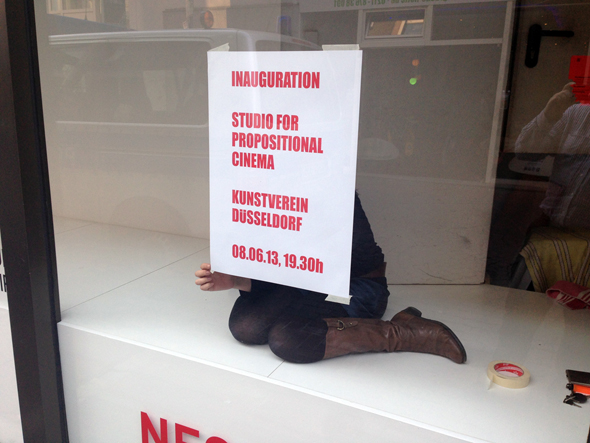 In the summer of 2013, Studio for Propositional Cinema (SPC) launched itself during the Kunstverein Düsseldorf's congress "Proposals and Propositions" with a talk by Hans-Jürgen Hafner, the director of the Kunstverein, which was theatrically disrupted by an audience member planted by SPC. The project with the Kunstverein continued with regular presentations and events throughout a three month period, which included an exhibition, a performance, a reading, a screening, a poster project, and so on, each taking place at a different type of venue. The project included collaborations with a range of cultural producers, including Henning Fehr & Philipp Rühr, Aaron Peck, Calla Henkel & Max Pitegoff, Pablo Larios, Dena Yago, and Rachel Rose.

This interview seeks to understand the intentions the SPC have for cinema in the 21st Century, taking into account cinema’s contemporary and historical modes of production and dissemination.

SB: What is the SPC's form and function?

SPC: We are a structure for generating images and language, and act as a functionary of that structure. One of our primary functions is to ensure that the structure remains formless.

We exist in order to find new ways to research, to produce, to disseminate. Within our cultural context, all forms of cultural production come with a set of traditions and accepted orthodoxies that function as models for the territory or language in which it is considered viable to function. We formed out of dissatisfaction with these impositions. We attempt to function just enough outside of the model to see which and how many aspects of the model we can remove, destroy, or rearrange while still viably, or at least arguably, working within the form of cinema, since it is our purported form of cultural engagement at the moment. Since our primary starting point comes from a notion of a disassembled cinema, we consider every element within the cinematic apparatus as simultaneously expendable and expandable.

SB: What considerations do you keep in mind when producing events and exhibitions? In particular, can you talk a little bit about the events that concluded your inaugural exhibition project, which was a screening of a video by Rachel Rose and a live theatre performance?

SPC: Rachel Rose's video Sitting Feeding Sleeping (2013) uses the form of a video essay to touch on the nature of being and humanness in our contemporary technological condition. It wavers between voices, from the scientific to the personal, between tenses, between positions, between politics and poetry. It doesn't have to claim an agenda, but a territory, a site of inquiry. We wanted to present this work because, like Rose, we are more interested in occupying a territory than a position.

Concurrently, Dena Yago, Calla Henkel & Max Pitegoff, and Pablo Larios worked on writing the script for their upcoming play Farming in Europe, which will premiere at New Theater in Berlin, a similarly provisional project with which we feel much affinity. We are interested in the impetus to lay the production stage bare, and to present things in a provisional state, open to change from the outside—something that live theatre has built into its nature.

We consider our exhibitions and events not only as modes for our distribution and reception, but also as a form of research. Rather than only study existent cultural occurrences and positions, we can also study cultural propositions in the moment they are happening by facilitating them. This is, very simply, a way of presenting something within the culture with a potential to change it so that it looks closer to a culture that you want to exist in. As Lawrence Weiner taught us, "unhappiness leads you to build a structure that will lead you to something closer to what you want."

We are not an exhibition space, we are not a screening series, we are not a dry-cleaner. We are for an art that comes out of a chimney like black hair and scatters in the sky. We want to move through culture, ungraspable, like oxygen or bird flu.

SB: How do you feel the project will expand?

SPC: We are currently developing many new projects: Death & Montage, a film which uses Javier Marias' short story "While The Women Are Sleeping" to consider Pier Paolo Pasolini's essay "Observations on the Long Take;" Action/Direction, a feature film about power and gender relations and scopohilia, which uses an anonymously written film treatment that we found in a film theory book containing the essay Acinema by Jean-François Lyotard, which is based on a form of prostitution called "posering" in which a subject is hired to be directed by the client without the allowance of nudity or physical content; a documentary about the Costa Concordia, which will follow the ship from before to after its existence as a physical object, from an idea to a memory; importing and distributing the works of Cape Verdian film collagist Vanda Villeneuve; Single, a film about Alexander Wissel's project Single Club, along with many other projects that we are not at liberty to discuss.

Our studio, while not a static, physical space, is open for engagement from the outside. We believe that art is by definition dialogical, and in order for cultural production to be critical (or: effective, relevant, contributional) it in fact must engage with an outside. We do not have specific intentions regarding how we engage with and produce culture. Rather, it is of primary importance that we have absolutely no idea what we are going to do next, what form it will take, what it will look like. In this way, we are completely open to new possibilities, and completely uninterested in definitions or distinctions that are invented and imposed by external sources. We can never know what we are or what we do, since each engagement expands or explodes the programme. What is our project? What is our programme? We have no idea.

There are some statements that seem a little too absolute. Let us think about it, let us look them over. And give us some time to come up with a concluding remark. We have something in mind for your question. We find it easier to write than to talk. We'll give you the notes that we'll add tomorrow morning.