Artist Profile: Rachel Reupke
By Laura McLean-Ferris
Rhizome's Artist Profiles are interviews with artists that have developed a significant body of work engaged (in its process, or in the issues it raises) with technology. See the full list of Artist Profiles here. Rachel Reupke's solo exhibition Wine & Spirits is on view at Cell Project Space in London through 27 October. 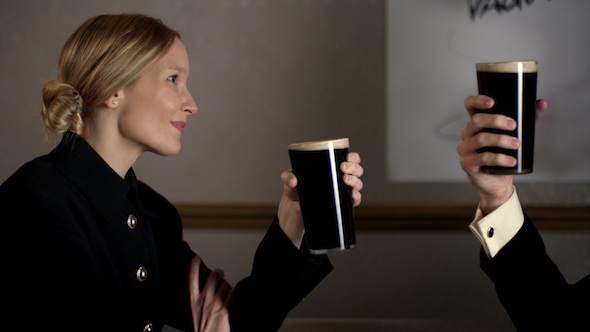 LMF: For several years now you have been working within the aesthetics of advertising imagery and the style of stock image photography. In Wine & Spirits (2013), your new film, the two characters (who are in a variety of situations involving the consumption of alcohol) are posed stock-still for long, drawn-out moments. Occasionally, I wondered if I was watching a freeze frame, until I saw a twitch or a flicker of a tendon. As with your previous work, there is a feeling of epic flatness and the constant suggestion that the gestures of the actors will be used to sell something. Yet it is partly we as viewers who are transforming the film into advertising—and imagining the context in which these bodies or objects might be used, such as in a brochure for a pub or hotel. How did you arrive at the particular choices that you made here in terms of the romantically-framed couple, the date-like drinking context?

RR: Each of the five scenes is based on a still image, some from print advertising and some photojournalism. The still reference is used quite literally in that the actors rarely move out of a posture and the camera rarely moves. Each scene has a slightly different aesthetic, in part dictated by the reference (art direction and lighting) and in part by the nature of the relationship between the couple. Initially, I was going to use different actors to play each scene, but in the end I decided to use the same actors throughout, opening up the possibility for the viewer to attempt to follow a thread. Ultimately, though, as we are actually watching five different couples rather than one, the relationship fails to develop. The drinking contexts are all English (except for one which is pretty much a dream sequence), so it is grounded in pub culture and pint after pint.

LMF: I find alcohol a really interesting choice of subject matter in the way that drinks somehow infect the cleanliness of imagery in the same way that they might have an effect on the brain and the bloodstream, or on perception. In your earlier film Ten Seconds or Greater (2010), characters appear to move around an apartment using items as though they were continually advertising the space or the objects that they interact with, most of the objects—vegetables, technological products—are very clean, while the alcoholic beverages seem less sterile. The wine or beer sits somewhat awkwardly within the idealized, almost airbrushed aesthetic of the commercial imagery, as it looks tainted or tinted, brown, maroon, dirty. It's difficult to find a context in which drinking looks perfectly wholesome. Upscale supermarkets have found ways to effectively deal with images of people holding alcoholic drinks, but I often notice with cheaper shops that there is some difficulty in pulling this off.

RR: You write about this very well, although I think I was probably thinking less about visual representations of alcohol, as the way its very presence affects how you read a scene. Placing it within any scenario suggests the potential for change, unpredictable change—it could go many ways—heightened emotional states, loosened inhibitions, gaiety, argument, moroseness and worse. And this drinking is such an ancient ritual. Here I represent it in a contemporary context, but these situations are as old as the hills. Coming back to your point about the visual qualities of drink, in both 10 Seconds or Greater and Wine & Spirits, the drinks are styled in opposition to a commercial aesthetic. The beer tends to look flat, as if its been standing for a long time, or wine glasses are half filled, something slightly sad, inadequate. In Wine & Spirits the drinks also, largely, remain untouched—no one gets drunk, so there is this agent for change, this catalyst on screen, but the characters remain unaffected by it. Paralysis.

LMF: I was aware that there was something "off" about the drinks, but couldn't quite place it. So it relates to the styling. How exactly did you develop this piece—was there a particular image or idea that you started with?

RR: Before I made Wine & Spirits, I made a short video called Deportment (2011), based on an old advert I had seen in Lisbon. It was an amateurishly painted scene of a couple drinking champagne, at a table, dressed with a candelabra, in an advert for a neighborhood cafe. It was very old fashioned, a long-dead advertising cliché, and it was exactly this quality that made it a surprising image. I used this scenario (man, woman, champagne, and candelabra) to retell a conversation I had had once (well, actually it's one line only), in an attempt to resuscitate the cliché, a bit like Dr. Frankenstein and his monster. In other words: it doesn't quite make it back to life! So, with Wine & Spirits I followed a similar process, using remembered conversations as the script, very banal man/woman type situations, and retelling them within the world of advertising and editorial photography. What this does exactly is hard for me to define, but I do know it is a lot to do with using structure and art direction to spark some sort of emotional response.

LMF: That's interesting that you employ this commercial language as vehicle for emotional content response. I always think of stock imagery as being just empty enough—waiting for emotional content—but there is something different in your work in that one faintly glimpses something a bit rawer or idiosyncratically personal. Could you say a bit more about the potential that you see in cliché and commercial photography?

RR: I suppose it might sound a bit strange to talk about emotional response when, as you say, the images are so flat, but it is exactly this flatness that allows me to talk about some things that would otherwise be too biographical, too embarrassing, or perhaps too banal. I use the veneer of a commercial aesthetic as a smokescreen for saying things that, rendered otherwise, would be some sort of horrific confessional kitchen sink drama. Likewise with cliché, using a "romantic" image of a man and a woman actually allows me the freedom to say anything I want, a bit like the inappropriate outbursts of a ventriloquist's dummy. I am passing the buck.

Stock footage has a particular fascination (or is particularly useful) for the nature of its content. Because it is often used to sell products that have no material substance: health insurance, pensions, mortgages for example, there is a huge array of glossy flat images of people being ill, witnessing traffic accidents, attending funerals and worrying about bills. There is happy stuff too of course, but that's not so remarkable. I find these clips moving, and more so for their matter-of-factness and lack of context. These subjects aren't very visible in the entertainment industry and rarely in visual art. It's quite unique.

LMF: So it's kind of a very straightforward visual poetics—abstract concepts, emotions or experiences played out almost like a game of charades, yet touching on awkward, dull or painful subjects. Why do you think that the smooth aesthetics of commercial photography have become a dominant aesthetic among artists that has recently come to signify that we are talking about "the Internet," when our experiences of browsers and such is usually, in fact, rather cluttered and messy?

RR: Good question. Is it because commercial material such as stock footage has become so much easier to access through the internet? Or is it because advertisers have sought to occupy the very same spaces originally conceived of as platforms for publishing non-commercial or personal material such as YouTube and Facebook, so there is a kind of day-to-day contamination?

I didn't start using digital technology within my art work until I began making videos around the year 2000. It was then that I got heavily into post-production and started using AfterEffects to collage video and still images together, using old-fashioned special effects methods, but rendering them digitally rather than photographically. Since then, I go in phases of using animation and very visible post-production, in my quicker, more experimental work, to a much more traditional style of studio filmmaking, where I would say the technology is simply a means to an end, rather than integral to the aesthetic.

Fine Art at Nottingham Trent University and later an MA in photography in the media department at Goldsmiths in London. This was an attempt to become better employable. In contradiction to my own life plan however, I spent the year making experimental videos and any serious idea of a career in the commercial sector evaporated!

Now I make art and teach, Fine Art and Filmmaking. Previously I have been a prop maker, scenic artist, graphic designer, window dresser, personal assistant, office manager and other.

An array of images, highlights include a picture of a running tap with the words "YOU TURN ME ON;" a postcard of a high class fishing outfit by Barbour from the V&A; an illustration of a slovenly Walter Mattheau in The Odd Couple, lazing in a chair surrounded by bachelor detritus; a watercolour titled The Evil Genius by mystic artist Austin Osman Spare; a C16th altar piece by Jorg Breu with Christ being beaten with wooden poles.