Edward Snowden, MMO gamming sweatshops in China, torture as participatory art, madness, and the troubled life of a Guantanamo Bay prison guard. The diverse research-based practice of Swiss-Austro-American duo UBERMORGEN makes a sustained assault on the notion that individual autonomy, liberty, privacy, and agency remain intact in advanced capitalist societies. Birthed in the mid-'90s heyday of highly politicized net.art, their project shatters the myth that democratic freedoms are being facilitated or enhanced by modern network technologies. Userunfriendly is Hans Bernhard and Lizvlx's first major solo exhibition in the UK as UBERMORGEN. Ambitious and impeccably installed, the duo has assembled a collection of shocks and reveals: projects that expose the surreptitious methods of coercion, and the subtle mechanisms of control prevalent in institutions of authority, from hospitals to supermax prisons.

The exhibition begins quietly. Along the left hand wall of the first gallery space is a series of five identical routers. This is Net.Art (2013), an elegant solution to that age-old conundrum: how to authentically display internet art in a gallery context. The method is called OFFLINE ART, a format devised by German artist Aram Bartholl wherein individual routers in an exhibition space each make a single web-based artwork accessible over wifi. Directly opposite these five pleasantly blinking minimalist boxes are the four large images of Oldify (2013), in which elfin, female cartoon avatars have been aged by tweaking a pixel here and a pixel there. They look like wrinkled digital debutantes, surreal tween-authored counterparts to Cindy Sherman's 2008 society portraits. 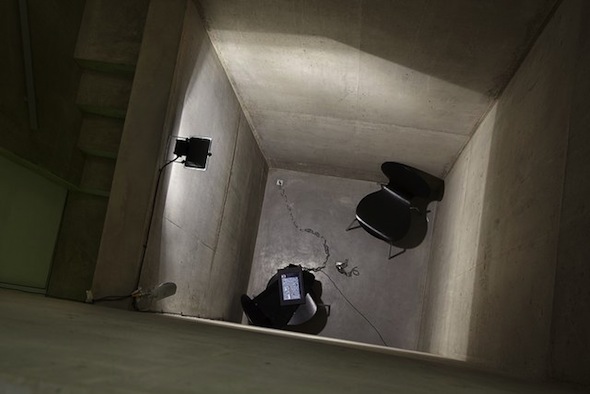 Past the safe territory of this trickster-like prelude is the dark core around which Userunfriendly and Carroll/Fletcher's four white cubes turn. Superenhanced (A Parallel Universe) (2013) is a stark and disquieting installation, performance, and participatory work. The void in the gallery's brutal central concrete stairwell has been changed into a compact, high-walled, ceilingless interrogation room. Viewers can look down into the space from the first floor, or descend the stairs and crawl through a tunnel on their hands and knees until they get inside. This act of crawling, of being in the position of supplicant, has a psychologically transformative effect. It is a short, claustrophobic transition enabling the participant to suspend disbelief and get into character.

Inside the interrogation room are handcuffs, two chairs, and a tablet computer. Participants, including regular gallery goers and performers invited by the artists, have a choice of two roles: handcuff-wearing prisoners or interrogators who administer torture based on instructions that appear on the tablet's screen. There were no participants or performers in Superenhanced during my visit to the gallery, and no plucky stranger keen to play the victim to my oppressor, or vice-versa. Perhaps this was a lucky break.

Elsewhere, monitors relayed CCTV footage of previous activity in the interrogation room. In one, a naked man sits as an interrogator berates him; a scene reminiscent of the Stanford prison experiment of 1971. As in that infamous event, there is a sense that Superenhanced allows participants to slide out of themselves and into their roles with disconcerting ease. 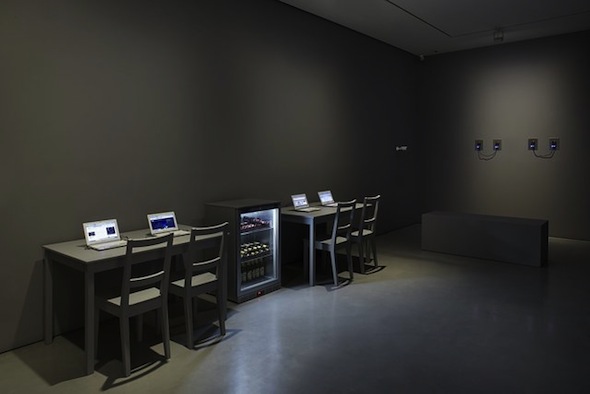 From there on in, Userunfriendly continues its stark and blackly comic exploration of the deep existential shadows of modernity.  Psych|OS (2002), is a series of photographs and documentation recounting Bernhard's "total mental breakdown," an episode caused by the artists heavy use of recreational drugs. Perpetrator (2008) is a photographic portrait of former Guantanamo Bay prison guard Chris Arendt, screaming in a transparent room within a room, while Do You Think That's Funny (2013) is an installation built around encrypted data allegedly given to the pair by Edward Snowden during an interview with the harried whistleblower at a Vienna Airport.

Today, net skepticism, with its inherent critique of neoliberal governmental and institutional tendencies, policies, and procedures, is de rigueur amongst artists and critically-engaged thinkers with even a basic awareness of digital technologies. But while the allure of appropriation and the ease of digital image production encourage legions of artists to produce work solely in and of the digital, Ubermorgen continually traverse the lines between virtual and corporeal life (yes, it still exists), bureaucracy and its effects. What remains central to their near-twenty year long practice of hacktivist, conceptual, and net.art is a concern for the contemporary human subject: fragmented, irrevocably telepresent, psychologically unstable, and everywhere under siege.