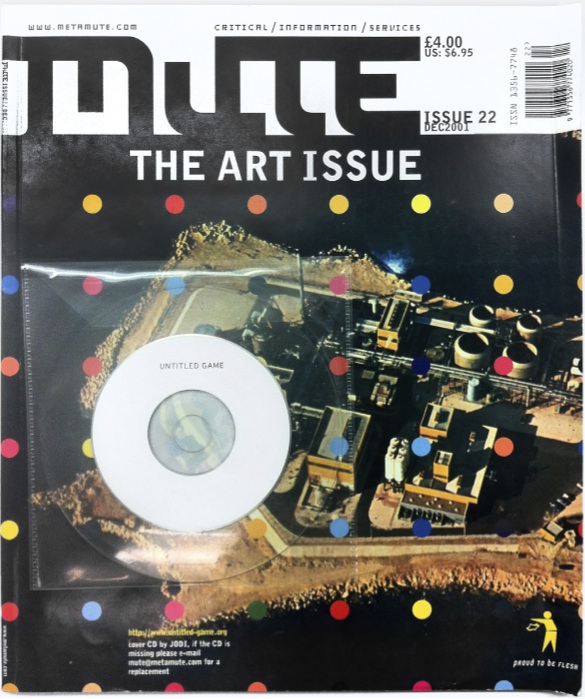 Rhizome's erstwhile Conservation Fellow, Lisa Adang, has published the results of her material analysis of JODI's Untitled Game (1996-2001), and her findings are both more concrete and more nuanced than much of the extant scholarship.

Although they may be best known for their web browser-based works, in this early period, JODI also experimented with the alteration of game code using two hugely popular computer game sources: Wolfenstein 3D (1993) and Quake 1 (1996), both developed by John D. Carmack, John Romero and the team at Id Software based in Richardson, Texas. Wolfenstein is widely recognized as the first fully rendered three-dimensional polygon game environment, a technique that allows objects and walls to appear to wrap around the player's perspective, realistically block the player’s sightline, and recede into a vanishing point that shifts with the main character/player's perspective. Characters within the game are also comprised of polygons, and sprite images occur on instances such as the firing of a weapon, scaling to suggest proximity and perspective.

Adang's analysis focuses on JODI's series of mods for Quake 1, collectively titled Untitled Game, using the version that was released with MUTE Magazine's "Art Issue" (pictured above) in 2001 as her case study. She delves into not only the perceptual experience of the work, but also its source code, leading her to draw conclusions that contradict my own description of the work, which was admittedly based on far less in-depth analysis, but still widely circulated. In particular, she takes issue with my assertion that the work reflects a subtractive approach, arguing that their alterations were more varied and complex than that. For example, she notes that certain aspects of the mod make visible aspects of the game which would otherwise be hidden, such as the source code. With regard to the famously minimalist "Arena" mod, in which everything onscreen is entirely white, Adang argues that:

all of the elements from Quake are present in Arena, including a fully rendered 3D space. They are invisible simply because they are devoid of value and hue.This includes the presence of polygonal walls that restrict navigation and respond perspectivally, as well as the files linked to the presence of objects and characters within the game. The sounds of Arena are also remnants from Quake.

In addition to its value for curators, artists, and writers who want to learn more about Untitled Game, Adang's paper is also a powerful argument against "screen essentialism," suggesting that focusing only on the perceptual experience of a born-digital artwork, rather than its underlying code and its relationship with the surrounding technological environment, may result in misleading or incomplete conclusions. Mea culpa.