Another History Is Possible
By Giampaolo Bianconi 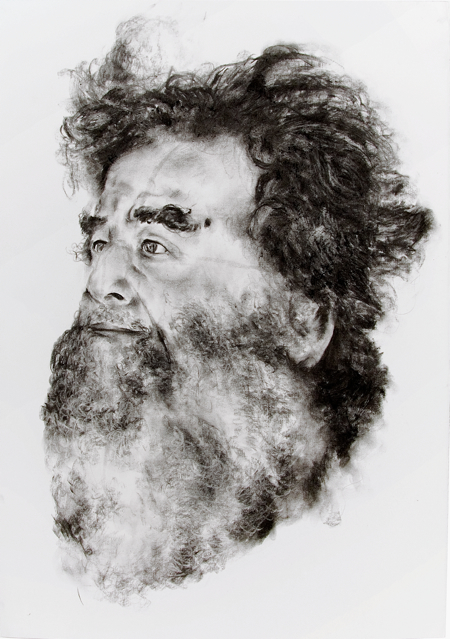 On Democracy by Saddam Hussein, with artwork by Paul Chan, is a slim yet imposing volume graced by a cloudy sketch of Hussein disguised beneath his formidable beard. The book contains three of Hussein’s speeches, from 1977-1978, along with an introduction by Jeff Severns Guntzel and essays by Negar Azimi and Nickolas Calabrese. Guntzel, in his introduction, describes the process through which he came to posses a volume of Hussein’s writings:

My original copy of Hussein’s book of essays was a gag gift, purchased by a dear friend at the book market on Mutanabi Street in Baghdad … Back home it ended up in a box in storage. I rediscovered the book sometime after the Mutanabi market had been destroyed by a suicide bomber in 2007, just a few months after Hussein’s hanging. As a gag gift it was funny. Now it is an artifact of an Iraq destroyed, dictator and all, and I find even the darkest of humor elusive.

On Democracy is published by Chan’s Badlands Unlimited press in this spirit: inquisitive and without ridicule. It is tempting to read history back into the book: after these speeches, in 1979, Hussein became President and initiated an extensive political purge of his Baath Party. Hussein’s rhetoric—his ability to conceal, with questions about democracy, the true nature and viciousness of his future regime—becomes a mental tug of war throughout the text.

As Calabrese indicates in his essay, “One would be hard pressed to locate the notorious dictator who rose to power through murder, torture, and blatant human-rights abuse” throughout the speeches collected in On Democracy. Which Hussein speaks when he exclaims, “Democratic practice should be permanently part of our policies as it constitutes a basic part of the Arab Baath Socialist Party’s ideology, which considers the individual a high value but not the absolute value,” and what definition of democracy, to be married with future totalitarianism, is being formulated? Or are these simply a tyrant’s lies?

If these are the stakes of On Democracy, they are ultimately self-reflexive: “Political injustice can happen anywhere under any name.” Calabrese continues. “The transformation of democracy into any type of oppressive political system can be a matter of a few well spoken words.” Pages before, Chan’s drawing of President Bush’s memoir, Decision Points, complete with 4.4 stars out of 5 (1,417 reviewers). Gunzel’s introduction shares an exchange between an American congressional aide and Tariq Aziz, then Hussein’s deputy prime minister. The aide asked when there would be democracy in Iraq. After an extensive answer reporting Hussein’s rise to power, Aziz put a period on his response: “Democracy? We haven’t had time for democracy. We’ve been at war for twenty years.” And how long have we been at war? 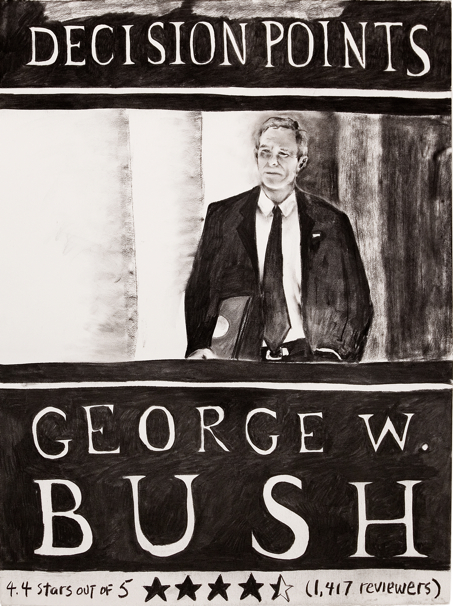 Azimi’s essay takes explores this unspoken terrain. In contrasting Hussein’s extensive control over Iraqi history with the choreography of American triumph following the declared termination of the war in Iraq, Azimi both opens an unknown history and traces its reverberations throughout our own 24 hour news cycle. More powerfully, Azimi chronicles Hussein’s loosening grip not only on the ability to define history, but to define himself: by the time of his death, he had lost so much control as to be disseminated, willy-nilly, via low-res cellphone video.

Yet the questions about narrative control in Azimi’s essay indicate that increased American cultural and political introspection is not On Democracy by Saddam Hussein’s potential. The challenge, instead, is to probe a history written neither by the heroes nor by consensus. Can there be another history? This, I think, is where On Democracy becomes essential. Badlands Unlimited is an art publishing house making “books in an expanded field.” In America’s current political and discursive landscape, where history is written in talking points by political campaigns, On Democracy is superfluous. The book then exists as an art project. Art becomes the place where history escapes from the confines of victory.

That narrative slipped away from Hussein in his final moments is, in some sense, the injustice that On Democracy by Saddam Hussein works against. The ability to read these not as Hussein’s speeches but as the speeches by the respected vice-president who became Saddam Hussein—that is this book’s challenge. Then perhaps another history could be possible. 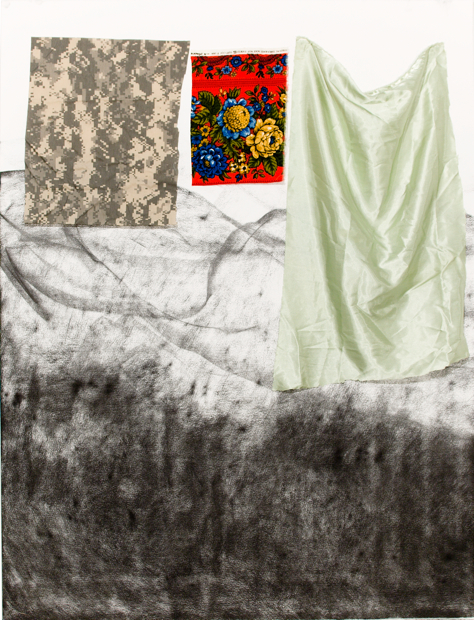