Between Search and Research: COR&P in Conversation with Michael Bell-Smith
By Ry Wharton 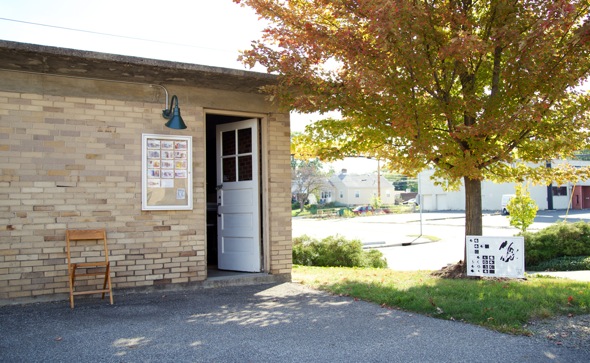 Exterior view of I Thought It Was a Pull, but It's a Push at the Center for Ongoing Research & Projects (COR&P). Photo: Tim Smith.

Last autumn, the Center for Ongoing Research & Projects (COR&P), a project space founded in 2012 by Ryland Wharton and Kris Paulsen, held a solo exhibition by Michael Bell-Smith entitled I Thought It Was a Pull, but It's a Push. The following interview explores the themes from that show, as well as the 12" record published alongside it, delving further into the ideas raised in Bell-Smith's recent piece for Rhizome, "Creative 2 Professional: 7 Things to Think About."

COR&P: COR&P's mission is to facilitate and present research-based art practices. In previous exhibitions, artists have conducted archival research (such as Shana Lutker's history of Surrealist fistfights) or mined data in real time (Aspen Mays' tracking of shipping traffic). It is apparent from your work that you are an avid collector of digital ephemera. Do you see the process of searching, downloading, and collecting files as a type of research, and how does that research inform your practice?

MBS: When I'm working, I never think in terms of "research." It implies a division between your input and your output, that you put everything on pause to conduct "research." Who has the time for that? When I think about it though, I conduct research all the time. I spend hours sorting through collections of stock footage. I clip things from across the web, logging them in different websites, applications, and folders. I'll pull out my phone in the middle of conversation to jot down the name of an article, tracking it down later to read from my phone while on the train. I take photos on the street. And so on.

With various levels of intervention these things might be flipped into "production"—input becomes output. So, my research is intertwined with my daily life and the process of actually making things.

It's also horizontal, skimming across the surface of various areas of knowledge. Skimming is natural when you're using the internet as your primary access point to the world (more "conventional" research also starts online: I buy books online, I plan what shows to go to online, etc.). But it's also about trying to engage with the world at the same level that my audience encounters it on a day-to-day basis. I want the work to be in conversation with what people encountered when they woke up this morning, what they saw on the way to the gallery—if I go too deep down any given rabbit hole, I'm losing that.

COR&P: The choice of "Research" in the name of the Center was intentional, since I felt it provided a great deal of curatorial freedom. The question of what is or isn't research is a slippery one, and I am not necessarily interested in making a distinction (which seems futile), but rather to make public an investigation of the convoluted path from idea to investigation to production to new idea, to investigation, etc.

The origin of the world "research" is the Old French resercher, meaning "to seek out closely." "Re-" intensifies "search." Your answer makes me wonder if this definition is completely outmoded given the way that we now conduct research and the way contemporary networked technologies are part of the process—we aren't necessarily digging in dusty boxes for a specific item, but conducting broad "searches," across the web or in databases, and always aided by software. We "search."

Given the massive amount of searchable data available at any moment, is there any longer a difference between searching and researching?

MBS: Maybe it's a perception of rigor. We think of the dusty box digging as a serious pursuit, while searching is casual and impulsive. But maybe searching can be as serious and focused as hunting through the stacks at the library (or alternately, maybe they're both just surfing through information).

I think the bigger issue is how we work with this access to everything, what we expect from it. If total access is the new starting point, where do we go from there? There's a gap—the way we think about these things hasn't caught up to how they really work. We still associate certain types of knowledge with power and cultural capital, when we know it's just an internet search away. I think the work is in going wider, rather than deeper, making connections between things that couldn't have been made before. While there's a lot of problems with the way the term "curation" is thrown around these days, there is something positive in identifying the importance of that type of thinking and work. 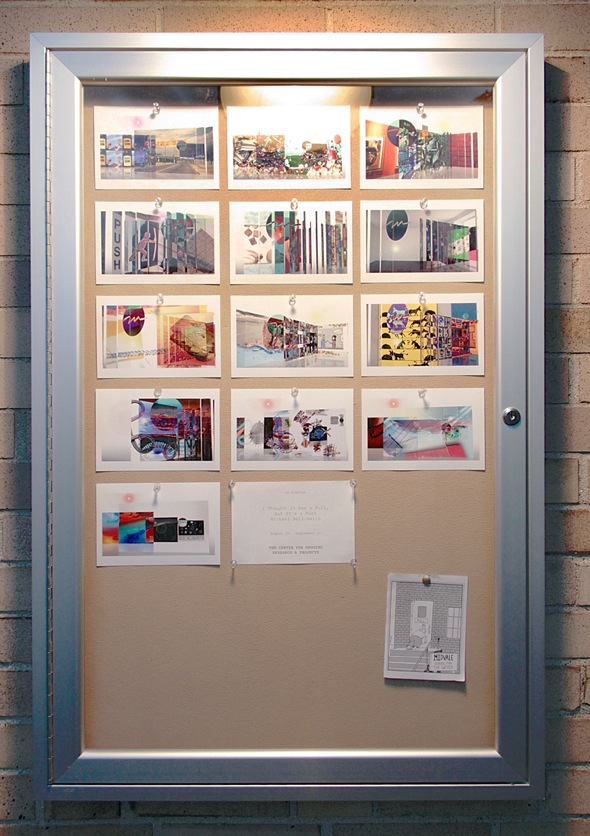 Michael Bell-Smith, I Thought it Was a Pull, but It's a Push (2013). Installation view (detail, featuring COR&P bulletin board). Photo: Gina Osterloh.

COR&P: Your installation at COR&P last fall, I Thought It Was a Pull but It's a Push, featured a looping soundtrack. In conjunction with the exhibition, we pressed it as a 12" record entitled Claps/Applause. One side has an ordered archive of samples of hands clapping, while the reverse has applause. Foley sound effects have long been a tool in filmmaking, and the record a tool for DJs and other performers. Claps/Applause is interesting in this regard because it is both a performative object, and a reusable archive. How do you imagine people listening to or using this record? Does it operate as a kind of tool, too?

MBS: I think of the record as existing in an in-between zone: utility posing as aesthetics, or vice versa. In many respects the sounds have been de-tooled—if it was simply a digital archive, it could function as a sound library or sample bank. The process of putting it on vinyl, as a composition, where the sounds are more fixed in place, changes it into something else. Where it might still work as a tool, is in that performative sense. There are those micro-genres of records designed for DJs: DJ tools, battle records, scratch records. They contain drum breaks, sound effects and acapellas for DJs to work with live. They're a bit anachronistic now, with so much of that going digital, but that makes them more interesting in certain ways. I think the record has a relationship to that world. Which is not to say it doesn't work as a composition—there's shifting textures, tension, release. It's great to listen to while cooking dinner, answering email or working out. 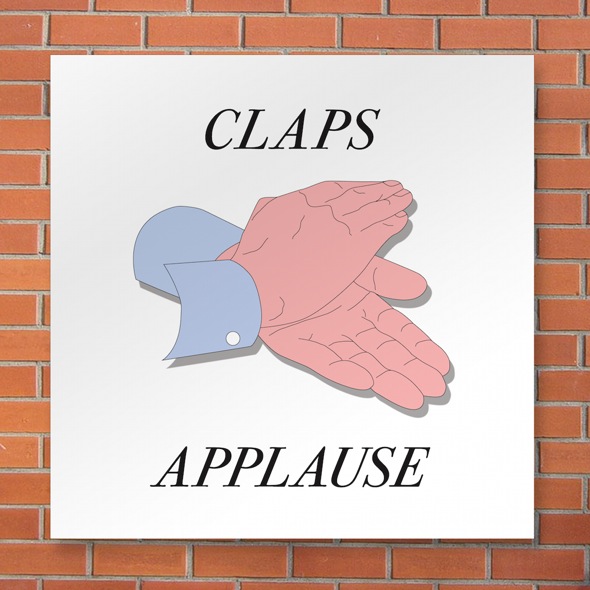 Michael Bell-Smith, cover image for Claps / Applause (COR&P, 2013), a 12" record created from 911 audio samples of claps and one audio sample of applause.

COR&P: What you're talking about connects to a broader renewed interest in physical media. Concurrent with the transition to digital music libraries and the rise in popularity of massive streaming services, vinyl sales have actually been increasing for the last seven years. You've been working with digital media and online archives and communities for several years. Do you see these objects as immaterial? Is the record a means of returning to physical media?

MBS: Working with more immaterial forms is less a conscious decision to be ephemeral, than it is about process, about the tools I use. 99% of my work is on a computer—taking that and making it into something explicitly material often feels arbitrary or disingenuous. Other times, however, that step is part of the process, or the translation is an important part of the piece. In the case of this record, the decision to put it on vinyl is a key part of what it's about. By making it a record—given that current state of vinyl—I can talk about digital media in a different way. It's the same conversation, just getting at it from another angle.

COR&P: The video portion of the installation presents a stream of images you've collected—graphic patterns, clip art, screenshots, etc.—in a cyclical digital flipbook of sorts. You've described the video as functioning as a "template." Do you see plugging what you've gleaned from your skimming into this template as a presentation or restaging of your act of researching or more of a transformative synthesis of the information?

MBS: For the video, I created a template of movements and video effects, a ten second loop of shifting and overlapping images. Different "content" was slotted into the template over and over again, creating the flipbook you describe. I saw this as a sort of machine for creating a structured yet random set of juxtapositions. It's a bit of a proposition that the presentation might produce new meanings, leading to a synthesis, to something more.

The video takes a lot of aesthetic cues from corporate design, specifically the glossy non-spaces of Web 2.0 and Apple design. But it's pushing against that as well, amped up, more dense and off kilter. So part of that proposition is about how we interpret or work with these structures in our daily lives. Is there a potential to find meaning or beauty or liberation within them, or do they just eat everything you throw into them? 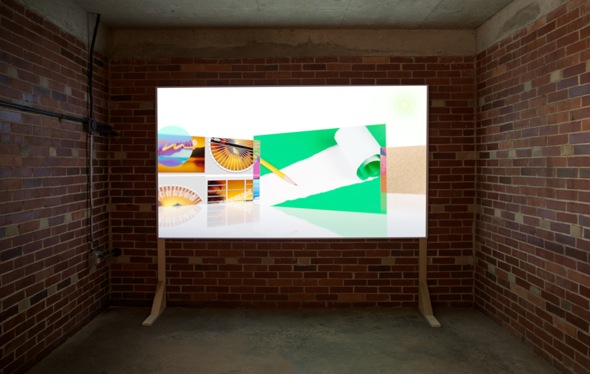 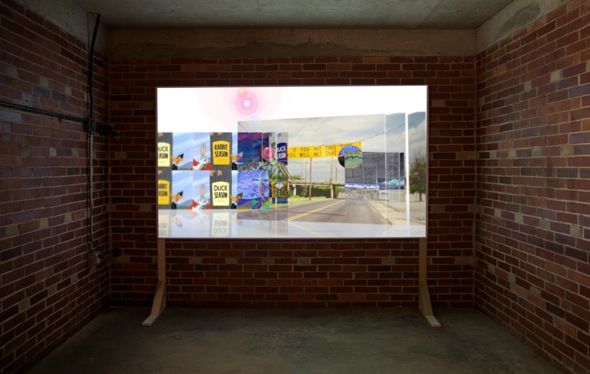 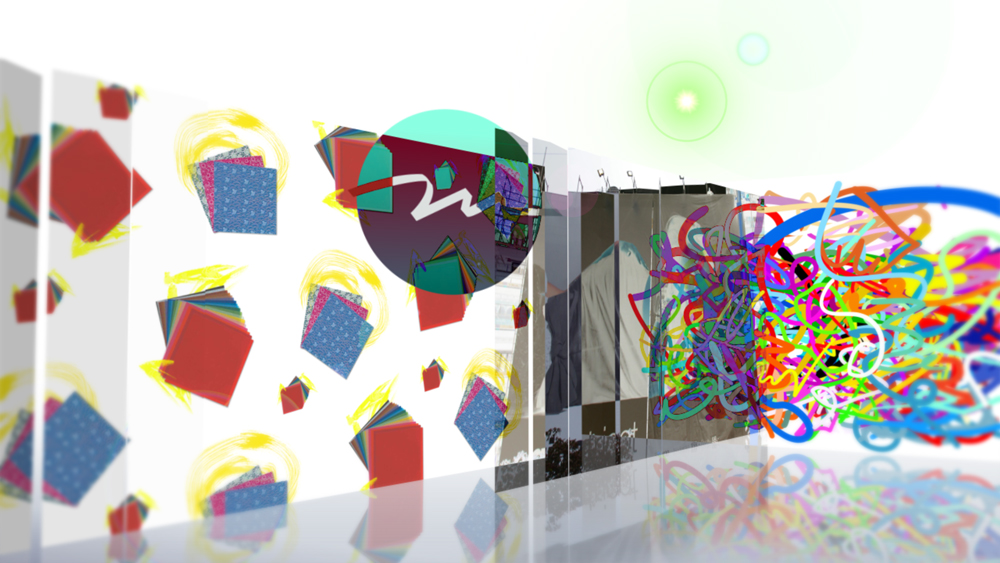 COR&P: You use a manual process to fill and sequence these templates. However, one could imagine using software to automate this process. Is the "handmade" aspect of the video important to you and why? (i.e. how does authorship and control matter to you here?)

MBS: While I work predominantly on the computer, I'm interested in the kind of work that comes out of traditional art processes: trial and error, repetition, iteration, chance, accident, etc. On the one hand, I "believe" in those approaches. On the other, I like the friction of working that way on a computer. There's a different kind of legibility of process when working with digital media. The computer is very good at hiding your hand, so the process comes through in much more ephemeral or nuanced ways. It results in a kind of anxiety with things made digitally: what did the person do and what did the computer do? I like playing with that.

At first glance, the template for the video it may look off the shelf, but in reality, while it's fairly simple, it's carefully choreographed. My hope is that this is legible if you give you the work enough time, but manually enacting the logic of a computer, or of a default commercial aesthetic, is an important aspect to the work as well. It gets back to that idea of how much these tools dictate what we can do with them—how much room do we have to break them, elevate them, or undermine them, while still working within their constraints?

COR&P: The types of tools you're talking about are primarily marketed at the "creative professional," which is a figure that I know interests you. Can you describe your interest in this figure?

MBS: Most digital art is commercial art. So the tools that get created for making art with your computer are designed for, and marketed to, creative professionals, people using them for "professional" (i.e. commercial) means. On top of that, there's a massive infrastructure of tips, tricks, tutorials, add-ons, stock media, and templates augmenting that software and hardware, all of it catering to this commercial market. By working toward a different end, I'm inherently misusing these tools, pushing against their intended use. It's about de-naturalizing them a bit, calling into question how they're normally used. That "normal" use is responsible for much of our day to day visual environment.

This association is echoed in the reception of the work. Digital media in an art context is read in relation to all the culture, advertising, etc. the audience sees on a daily basis. There's a built-in conversation to the broader world—it's what draws me to working the way I do. I'm trying to piggy-back on that everyday experience, then take it on a detour.