My Life Without Technoviking: An Interview with Matthias Fritsch
By Domenico Quaranta

Matthias Fritsch is an independent artist from Berlin, most well known for his work Kneecam No 1—the live video that brought Technoviking to the internet. Over a decade after he uploaded the clip that went viral, Fritsch now is enduring a long legal battle with Technoviking himself, who sued for the reproduction, proliferation, and unwarranted use of his likeness. In response to the process, Fritsch is making The Story of Technoviking, a crowd-funded documentary that aims to shed light on the legal issues surrounding viral images. Below, Fritsch talks about what it’s like do battle in court with a viking, the ownership of images in the internet age, and hopes for his current project. 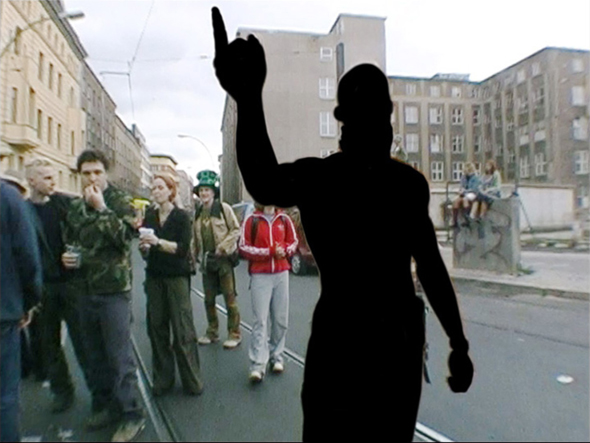 My Life Without Technoviking—since the trial began, Fritsch is no longer allowed to use images of the plaintiff's face.

DQ: Matthias, I'm of course curious about the video that originated it all. What was, for you, Kneecam No 1 (2000) before it became an internet meme? Why did you upload it to YouTube? Were you expecting such a viral reaction? What did you think when it happened?

MF: Kneecam No 1 was the beginning of a series of short experimental films in which I wanted to explore the role of the camera and the perception of reality in film. When Youtube emerged as an easily accessible video streaming platform, I started uploading my films in order to integrate them into my website. I wasn't aware of viral videos back in 2006 and learned about this emerging culture of internet memes when my own clip went viral.

DQ: In Kneecam No 1, you simply turn your camera on during the Fuckparade in Berlin and record a short clip. The appearance of the man later known as the "technoviking" is something you couldn't expect, unless it's staged; and that turns the video into something completely different from a simple fragment of reality. Your description of the video on your website, however, is somehow ambiguous about this. You write: "Real or set up? The camera as a voyeur in an extraordinary situation and level of intimacy." Can you tell us more about this?

MF: The documentation sequence turned out to be very dense and intense. My original impulse in publishing this uncut sequence came from its potential of raising the question of whether what you see is real or staged—a question that was very much connected to my personal interests and artistic focus. I was influenced by developments in film aesthetics, for example by Dogma 95 from the Danish film scene of the 90s. And yes, you could say that I pressed a button, stayed calm, like a street photographer and captured the moment in reality, but the act of publishing it put in a frame of working on filmic language and perception.

DQ: The viral circulation of an artifact conceived as an artwork may be experienced as an act of violence against the artwork itself. You lose control of your work, its circulation, the way it is understood. It circulates under a different title, and without your name on it. And probably, it is completely misunderstood. How did you react to all this?

MF: The film went viral on a video portal that I didn't even know about. And still—although I lost control—my original question was still not answered, and I didn't reveal if the video was staged or not. The portal break.com paid the guy that copied the video from my channel and reposted it for $2,000 USD after the first 2 million clicks and later on, when it reached 4 million clicks, most likely another $2,000. I didn't bother much about that. The "violation" that one could see in this user’s appropriation of my film made a work of mine famous, and the reactions of the community were much more fascinating to me than the notion of losing control or being ripped off. The idea that I could have an issue with the protagonist didn't occur to me. He was perceived as a hero. The film was a piece of art, originally shot in a political demonstration with a camera that had a very big and obvious lens. 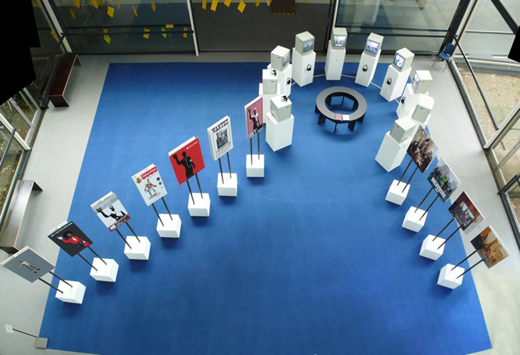 DQ: Casually or not, the viral success of Kneecam No 1 matches very well your interest in the relationship between mediation and reality and somehow conditioned the later developments of your work, focused on digital communities and online distribution channels (I'm thinking of the Technoviking Archive and Music for the Masses, your online archive of free, silent music video-length works to which musicians are invited to add their own songs). Do you agree? Do you think your work would have developed in a different way, if you hadn't met, on your way, the Technoviking?

MF: The Technoviking phenomenon showed me a new world: global online communities. But already years earlier I had been involved in analogue social platforms. At the time when I shot the video, I was active in independent film scene in Berlin, organizing a festival and open screenings that enabled filmmakers in Berlin a platform to show, test, and exchange their works. For as long as I can remember, I have also liked the idea of media recycling, and I did recycle my own material in different works before the Technoviking-Meme was born.

I don't know if I would really do something completely different if Kneecam No 1 hadn’t become a viral piece of pop culture. For sure without the figure of Technoviking there is no Technoviking Archive. Also, I might not have come up with my 5-year project Music from the Masses, which was directly inspired by observing strategies of recycling in the users’ reactions to the technoviking meme: the exchange of soundtracks. Funnily enough, in court at the Berlin trial the plaintiff's lawyer argued several times that my whole artistic career is based on Technoviking.

This is an interesting point, by the way. Let's assume he is right—who is the artist, who is the originator of the meme and the body of works that I have been working on for the last 6 years? The plaintiff? My guess is: the community is actually the originator and the driving artistic and creative force in this collective cultural production.

DQ: I would expand on this by saying that, even if your original question remained unanswered, it was exactly this question that resonated in the online community that turned your video into a meme. The video fascinated people for the same reason it fascinated you: its unclear status, between documentation and fiction, and its main character's connection with a narrative and an imaginary that exceeds him, that others shaped long before the video (from Thor to Conan the Barbarian to heavy metal singers and the techno underground). In other words: the plaintiff became the Technoviking not because he was "original," but because he was originally playing a cultural stereotype in a real life event—and people wouldn't have noticed it if you didn't notice it in the first place, if you hadn’t published your footage when you did. Do you agree?

MF: I agree that there is no original and the figure of the Technoviking is the result of new combinations of old ideas. That sounds like something that applies to almost everything. An interesting aspect of the trial is actually to distinguish between the real persona of the plaintiff and the art persona Technoviking. It might just be a strategic argument that the plaintiff does not see the difference and takes everything that is connected to Technoviking-Meme very personally. This explains why he even wants to censor comics and drawings of the Technoviking meme. The original question somehow returns to the courtroom, but now with the focus on the Technoviking-Art-Persona rather than the video: is he real or is he fiction?

DQ: After losing control of your artwork, you have also had the experience of being sued by the subject of that artwork for what other people have done with it. This is pretty absurd because, in my view, you are both victims of your internet celebrity: you should feel sympathetic to each other. At the same time, however, the trial raises a series of questions about intellectual property and reproduction rights in the internet age: who owns the image? Should we be free to use, manipulate, and redistribute what's found online?

MF: To collect opinions, concepts, and hopefully solutions on those urgent issues I am working on a documentary film. One interesting thought was expressed by Ulf Petterson, who works in Brussels for the European Union. He said that the plaintiff "has already ‘published’ his image by appearing in a public place."

The technological changes within the last years generate and boost our collective visual memory of reality. It is constantly growing and keeps each one of us in a huge global data cloud. We have no real idea where this data will end up and how they will be used one day. State, companies and citizens produce and collect massive amounts of images every second and nobody can escape this anymore. New electronic senses demand new human behavior and (yet unwritten) codes and must result in an adjustment of the protection of privacy. We can observe a new individual behavior in public. We need to change ourselves if we want to stay out of the data collecting sphere that surrounds us. I am not suggesting that everybody who is really concerned should wear a burka, but most likely this would be the most effective protection to escape the image stream that we constantly create by exposing ourselves to the CCTVs and smart phones around us.

DQ: What Petterson says is right. In an age when there are more cameras than eyes, and in which the "publish" option is embedded in almost every recording tool, every action performed in the public space has the potential to end up on the public space of the internet in a minute. Celebrities know it very well, and it's hard to imagine Keanu Reeves or Scarlett Johansson suing somebody for the "Sad Keanu" or the "Scarlett Johansson Falling Down" meme. At the same time, your trial shows that it's time to start a public debate and make an attempt to regulate this subject. Is this what you are trying to do with your upcoming documentary?

MF: Yes, that's basically my motivation for making the film. From the moment that something is online and the community starts to use, manipulate, and redistribute content—I think there is a right to share. Nothing is really original and everything is the result of culture that existed before. If creators demand to own their content, they should also be responsible for sharing their income with the society that inspired their ideas. How can you own something that you (at least to a large extent) took from others for free? Therefore, I see the protection of exclusive rights on intellectual property as the wrong tool for the future. It only creates complications for cultural development and a fair society. Not restrictions and control, but fairness and openness are the values we should focus on.

At this point, the courtroom is not the place to solve these issues. The judges have a very tight corset of laws that are already 100 years old. The law to own and control your own image (which the plaintiff demands) is from 1907. To find a final judgement in court and maybe change some laws, it still has to go one level higher to the constitutional court. This means a many-year long process, and it demands a really strong financial backbone to keep up with the costs—something that is not suitable to my personal situation. Therefore, to contribute to the discourse and push for new solutions, I would rather make a documentary film that can be discussed in public.