'My Little Pony' is the Nearest I Can Get to LSD: UBERMORGEN on Teletext Art
By Raffaela Kolb

Artist duo UBERMORGEN are participating in the International Teletext Art Festival, which was recently profiled here on Rhizome. The following interview by Raffaela Kolb with UBERMORGEN's Hans Bernhard was originally conducted for RCKSTR Magazine—viewable here—and has been translated and reprinted with permission. 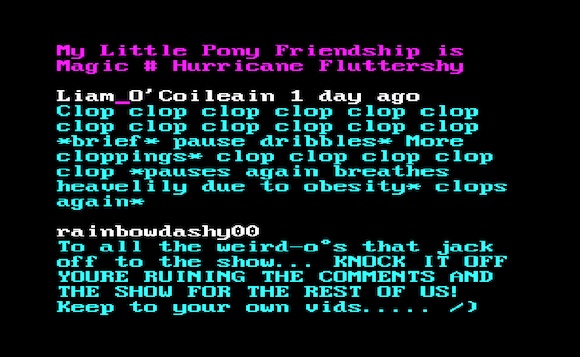 RK: How did you and your partner get invited to the ITAF 2013?

UM: I have no idea. Somewhere, somehow, sometime, a person unknown to me, from Finland I believe, sent an email to one of the hundreds of UBERMORGEN email addresses. I also did not read the email, but just saw the words teletext, Finland, Switzerland (SRF), Austria (ORF), Germany (ARD) and art, and intuitively replied with "YES WE CAN"... It wasn't until much later that I read about all the bans: no pornography (although that is the best part of teletext), no advertising (shit! that would be the second best) and they can censor everything, if it doesn't suit them, i.e the organizers. Shit! I thought to myself, but then it was already too late... I then pinged my friend, Dragan Espenschied, of Bodenständig2000, who happens to be a big fan of [German synthpop duo] Modern Talking and has wanted to feature Thomas Anders with his Nora Ketterl on teletext for quite a while now... I then integrated a small reference into our piece... A fitting tribute to a great artist (DRX) and a great German band (Modern Talking).

RK: Have you guys done any works using teletext art before?

UM: Yes, we have wanted to to do something using teletext art for years, but it never came to fruition. Then in 2008, lizvlx and I carried out the project Sound of eBay as a conclusion of the EKMRZ trilogy (GWEI—Google Will Eat Itself and Amazon Noir—The Big Book Crime)

—> Simply put: We converted eBay user data into techno music... Then we thought, brilliant, there is no context to teletext, neither in form nor in content, and for this reason, we thus made the visual components in teletext-style, teletext-porn, ...we repeatedly got our butts kicked and received hate e-mails, death threats and "unfriendings" because of it. But... fuck it... Sex sells and the project was a blockbuster success in the field of art, people are hysterical, because the sound coder, Stefan Nussbaumer, tinkered with the super-complex black box—which just converted the raw data into music—for over a year, and in the end, all the songs still sounded exactly the same. Brilliant! We couldn't have planned it any better.
—-> check it out:http://sound-of-eBay.com …

RK: What do you understand by teletext art?

UM: Art using the teletext medium or with teletext aesthetics... I don't care where it is shown, it is so unambiguous in form and so beautiful in its minimalism, from the rough edges and angles and the minimalistic color palette. Here again every artist should have done at least one teletext project in his career, otherwise, his/her entire work is simply not complete and certainly loses a couple of percentage points on the art market in the long run.

RK: How did you transform the few possibilities offered by teletext?

UM: I certainly did not get this damned software anyway and am also not interested. Since I rather develop the concepts at UBERMORGEN and not the aesthetics and the graphics derived from it. But I had to do these five pages all by myself, because we were then engaged in a vicious quarrel and I was confronted internally with sabotage and blackmail.

Due to lack of funds, I also couldn't simply outsource the production, which I otherwise would have gladly done. Therefore I had to sit down and suck up something from the Google-universe.

After already being fascinated for a couple of years by Monster High, Winx, My Little Pony (MLP) and Littlest Pet Shop (LPS)—and I am not alone, my daughters watch MLP for hours and I gladly watch with them. It is the nearest I can get to an LSD high and since I sadly can't take drugs anymore, I must take my fix of MLP and LPS like it's methadone, in order to create weird hallucinations and synapse connections... 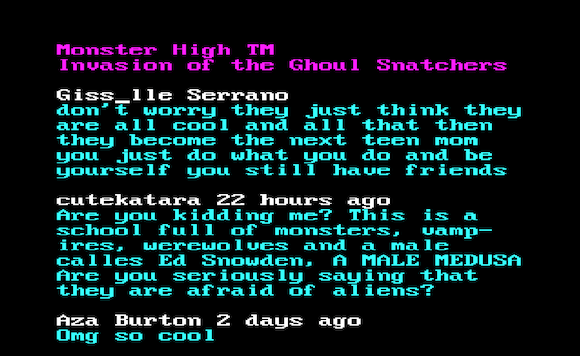 In any case I sit in front of the computer in my studio and notice that it will definitely not work with graphics, the shit is too complicated. I therefore copy the best YouTube comments in 5 different episodes of the mentioned series—I also added School for Vampires to it, since the kids watch it 10 hours a day, it's the summer holidays you know—and paste them into the antiquated teletext editor, which is compatible with absolutely nothing, with the possible exception of a still more faulty teletext editor at some crappy TV station.

Since I however find the colors super cool and have already found the best of the best in html1, I therefore took this combined magenta, cyan, and white blinking font. It was also beautiful afterwards, you can figure out the rest by yourself...

RK: In your opinion, are the limited possibilities of the medium more of an advantage than a disadvantage?

UM: The decreased colors are an advantage.

Actually everything is an advantage, because I am of the opinion that Ideas and concepts and the stories generated from them can be most effectively produced and communicated with the simplest media, because they do not cause distraction in production or reception. We thus remain at the heart of the matter with teletext, and the biggest challenge is to fascinate and captivate a user with 10KB. I actually come from text (from literature). It is certainly therefore standard, quasi, minimum data usage alternative expression...