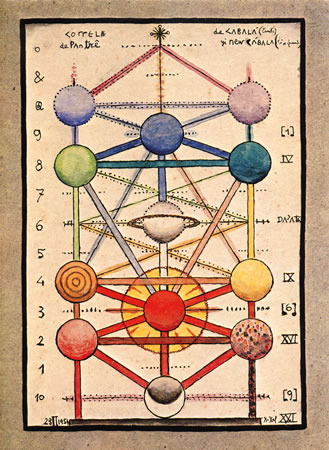 Only collective inventions have any real value, Xul Solar once told his close friend and fellow Porteño Jorge Luis Borges, trying to convince him (unsuccessfully) to write in Neo-Criollo, one of the two languages he had invented and the one he himself preferred to use for writing and conversation.  Such was the importance to Solar of friendship, sodalities esoteric and otherwise, and cooperation.  These days the artist, who died 50 years ago this month and whose close friendship with Borges is at the heart of an ongoing exhibition at the Americas Society in New York, is remembered less for his hermetic, often illegibly coded mystical watercolor paintings than for the collective séance that he made of his particular corner of Buenos Aires' cosmopolitan avant-garde of the 1920s and the decades that followed.  But this emphasis on the collective nature of invention also acts as a connecting thread—an axis around which to organize Xul's otherwise deeply idiosyncratic mundus. His diverse ideas and projects—his "Pan-Chess," an antipodean Glasperlenspiel that combined language, numerology and astrology; his invented languages and religions and piano keyboards and mathematics; his cosmic vision of the American future, floating somewhere between the pre-Columbian and the post-Sputnik—all point to the irresoluble paradox at the heart of the artist's techno-utopian vision, at once impossibly scaled and communal, and yet at the same time deeply, even inaccessibly idiosyncratic.

Sometime around 1957 Solar, who was born Óscar Agustín Alejandro Schulz Solari, proposed to do a series of articles for a Buenos Aires-based magazine called Mirador: Panorama de la Civilización Industrial.  These would mark the culmination of a body of technological research he had pursued since the early 1940s, delineating a vision of the future at once utopian, post-human and profoundly unsettling.  One text, "Autómatas en la historia chica" ("Automata in the little history"), presented an eccentric history of robotics, tracing its evolution from the steam-powered mechanical pigeon described by ancient Greek philosopher Archytas in the fourth century BC, through the brazen heads of medieval wizards, to Solar's own post-war present and the advent of what he called the “new Prometheus.” This latter stage was characterized by factory machines with “pincher-fingers” “that feed on electricity,” destined to free mankind from the necessity of labor.

In his article for Mirador, the author provided an autobiographical note, calling himself, among other things, a "painter, writer and little else.…Re-creator, not inventor, and world champion of Pan-chess and other serious games that almost nobody plays; father of a Pan-language that is meant to be perfect and almost nobody speaks and godfather of another, vulgar tongue without a vulgus; the author of useful grafías that almost no one reads, exegete of twelve (plus one universal) religions and philosophies that almost no one listens to."

If he sounds a bit disillusioned, one can hardly blame him: in the end, "Automata in the little history" was the only article of his proposed series that Mirador agreed to publish.  But two others survive from the same period, and together they comprise an unusual, if fragmentary, glimpse into Solar's vision of possible futures.  As the Second World War raged and then the Cold War simmered, Solar was contemplating cyborgs and celestial cities.

"Proposals for a future life. Something semi-technical on anatomical improvements and new beings," published in Lyra magazine in 1957—and illustrated with three of Solar’s visionary watercolor paintings from 1935-1936—imagines a post-human world of hybrids, mestizos—to use Solar's word—at once whimsical and disturbing: communal wet-nurses with tremendous breasts branching "into multiple tubes or natural tentacles (…) some longer than others, up to several meters, in order to accommodate even the most distant sucklings of the numerous brood;" men endowed with "a muscular tail of some kind (…) long and prehensile, capable of supporting the body like a third arm"; or the development, through careful breeding and technological enhancement, of arms like "parachute cords, or better yet wings." 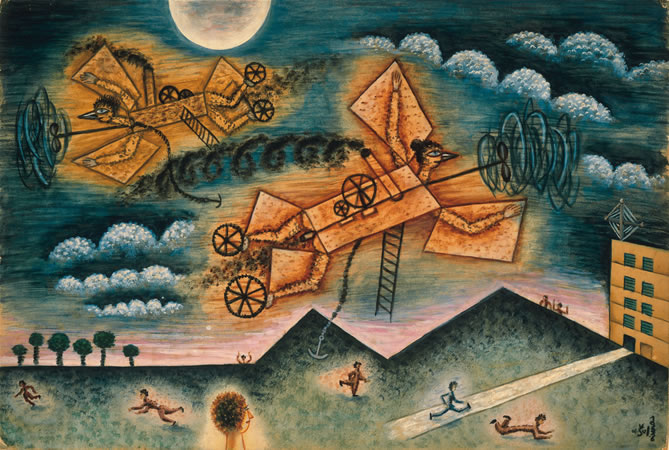 Two Mestizos of Airplane and Human (1935)

One of the three illustrations for "Proposals for a future life" is a painting from 1935 called Two Mestizos of Airplane and Human—another is one from 1936 titled, in Solar’s own Neo-Criollo language, Vuelvilla, or The Flying City.  The latter painting also gave Solar the title for the third of his texts from the late 1950s, in which he imagines a liberated, airborne metropolis, a techno-utopia held aloft by enormous gas-filled balloons and moving with the wind, its inhabitants beyond race, creed and national border. Solar described them as "just below the zenith, as in the book of Revelation, chapter 21, verse 2: 'And I, John, saw the holy city, the New Jerusalem, coming down from heaven, from God, prepared as a bride adorned for her husband.’"

The artist's interest in new technologies and their implications may seem to be at odds with the way he is usually understood: as avant-garde occultist and proto-New Age demiurge playing the enigmatic gadfly and cosmic prankster to Buenos Aires' potent generación martinfierrista. But Solar’s techno-utopianism combined a destabilizing Rabelaisian grotesquerie with pulp sci-fi speculation and a post-religious mystical reconstitution of the world, making it very much synthetic and of a piece with his broader ludic metaphysics.