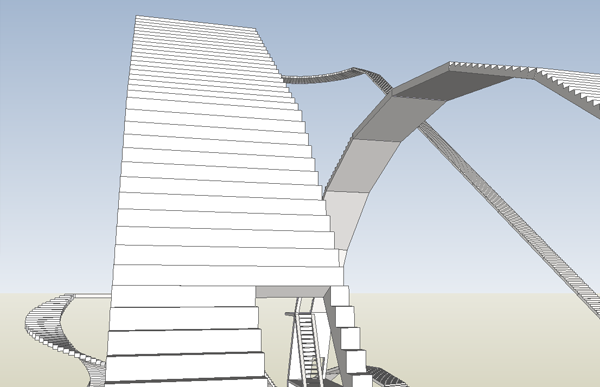 Screenshot of The Sole Ripper in Google SketchUp, courtesy of the artist

The Sole Ripper is a digital book containing a 1:132 scale architectural view of a fictional pedestrian roller coster modeled for an empty lot in Manhattan discovered by Lucas on Google Maps. The architectural plan arrives fragmented and out of order, given its shape through a process of software conventions and workarounds. It is a visual corollary to the download process in which files are broken down into packets and transmitted over internet pathways from one computer to another, and reconfigured at their final destination. Only, Lucas leaves the task of file reconfigurability open to the viewer, and opts for an alternative view that features a 352-page vertical drop and bears likeness to a filmstrip. Recalling Luis Borges's hyperreal map that was as large as the empire itself from "On Exactitude in Science," Lucas's plan for The Sole Ripper is too large to see in its entirety even when reassembled.

The Download gives a first look to great art for Rhizome members. Start your own digital art collection by becoming a member today.