Five Videos: Jemima Wyman's The Shared Face of the Collective
By Rhizome + FACT

Five Videos is an online series "hosted" by Rhizome, in collaboration with FACT, responding to the Liverpool Biennial's theme, The Unexpected Guest. Each week throughout the Liverpool Biennial, a new artist will curate five videos about hospitality. This week, Jemima Wyman looks at camouflage as a tactic of grassrooots collectives: 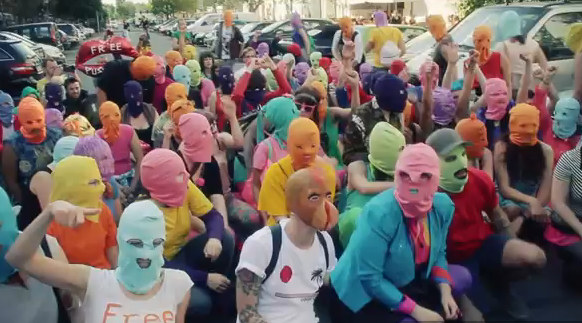 For the Liverpool Biennale, I invited the community to create a soft analog network that was woven out of second-hand camouflage and hunting t-shirts. For the next several weeks the community has, and will be claiming territory within the FACT building through weaving a large-scale communal skin out of individual combat clothing on hula-hoop looms. This skin is visibly hand-made and warms the cold concrete walls. The weavings are made in the space together as a group, the title Collective Coverings, Communal Skin. We occupy the space, through constructing a shared skin, and transform conflict into comfort.

Hannah Arendt’s philosophical ideas on reflexive judgment stipulate the importance of visiting and imagining positions beyond the self in order to consider the moral dimension of actions and decisions, so as to exist with an enlarged mentality. The quickest way to go visiting is to slip into someone else’s skin or share in a communal covering. I’ve been using fabric and masking in my practice as both an empathetic device and  a resistance strategy for some time. By crafting metaphoric skins that individuals can wear, or a community can share in, we bring awareness to the politics of embodiment (being) and spectacle (seeing).

This work developed from a feminist position and a desire to equalize the gaze, to make it reciprocal. To overcome the standard objectification of the female body, I started to cloak, exaggerate and extrude through fabric skins. The bodies that I represented and researched were ones that desired to be looked at and listened to in a reciprocal exchange whereby they weren’t oppressed by their circumstance.

With the selected five videos, I thought we might participate in some philosophical anthropology and visit groups that don the mask while using online media for the specific purpose of empowerment. Traditionally within western art the position of authority was behind the camera, representing the other through colonizing eyes. The decentralization of image production and on-line presentation has allowed for an empowered self-determining subject to have two-way communication with mass participation.

Let’s start with the Zapatistas: They use technology strategically to promote international discussion around their cause and to bypass the Mexican government. There is a poetics to their movement, women are included, and it is primarily non-violent. The balaclava (or ski mask) is the shared face of the collective, it is the all-in-one and the one-in-all.

“Behind us are the we that are you. Behind our balaclavas is the face of all the excluded women. Of all the forgotten indigenous people. Of all the persecuted homosexuals. Of all the despised youth. Of all the beaten migrants. Of all those imprisoned for their word and their thought. Of all the humiliated workers. Of all those who have died from being forgotten. Of all the simple and ordinary men and women who do not count, who are not seen, who are not named, who have no tomorrow.” (Member of the EZLN/ Zapatistas, Major Ana Maria quoted in “Unbounded Publics: Transgressive Public Spheres, Zapatismo, and Political Theory” By Richard Gilman-Opalsky)

In this video Subcomandante Marcos acknowledges the importance of independent media to challenge dominant ideology and to report on social struggles that cotemporary world news refuses to cover.

A couple of months ago, Peaches and Simone Jones organized a flash mob film shoot with a colorful balaclava clad crowd. Through aural and visual mimicry, they display their  solidarity with Pussy Riot, the punk feminist art collective. In a multi-colored peacock protest they stare out and shout, “We are all Pussy Riot!”. The video condems the Russian authorities who have Pussy Riot on trial and promotes their cause with a link to petition at the end.

For quiet some time feminist activists have employed masks as a form of resistance. In 1985 the Guerrilla Girls formed to protest inequities with the international art world. In this video they wear a variety of confrontational gorilla masks. They recount their pseudonyms, with off-camera laughter and canned clapping, the humor is bubbling away between members. The language present in the video “After all, we could be anyone…..We are everywhere” reiterates the potential power of the mask to transform the individual into the mass, or in this case give historical omnipresence to those typically not allowed that privilege.

Like the Guerrilla Girls, Black Bloc fights against oppressive institutions although they take the palette of black as their mask, for face and body. Black Bloc uses the fused costumed social body as a device in militant protests. The group’s tactics were first used in Germany in the 1980’s. Their visual effect is comparable to zebra camouflaging techniques. The zebra’s stripes create a moiré effect within a herd, a communal skin that appears to be of a much larger animal; this confuses and creates fear in the apex predator and discourages an attack. In this video there is mention of the visual effect of their militant tactics, that it is intended as theatre to remind oppressive institutions and the police state that “the people still have the power”.

Less physically violent than Black Bloc in their attacks is the Anonymous group.

Their online presence has been prolific and most demands and attacks have been directed at Internet censorship and surveillance. They wear the ultimate corporate body mask — the suit — while protecting their identities with a mask that has a long history dating back to Guy Fawkes in the 1600’s. The group’s visual popularity has grown since Occupy protestors around the world adopted Anonyomous’s trademark mask. Like the balaclava, the Guy Fawkes likeness provides visual solidarity in protesting oppressive power structures. Thus, divergent perspectives have found a community in the same face. This final video aims to promote their anti-censorship Wikipedia-style structure TYLER due to launch in December 2012.

The use of masks in conflict, protest, and civil disobedience has grown rapidly in the last two decades. This development has occurred in tandem with the proliferation of imaging devices that record our every move, and a rapidly growing public disillusionment with governmental and financial institutions. Marginalized groups have a lot to lose in not protecting their identity. Masks create a single visual identity for groups, providing collective power, as these videos demonstrate.

1. he was issued a gas-mask into which somebody had vomited. because liquids have the effect of disrupting and blocking a gas-mask's air filter, he soon discovered that it was very hard to breathe in this mask, it was like being slowly smothered by a pillow. he asked the sgt. for a replacement filter– request denied. laid-out in his foxhole with that mask on, after a certain amount of time he tended to black-out, his head propped against his rifle.

2. the militant anarchist smashed a plate glass window, and afterwards somebody posted a video of this event, along with a caption explaining that they had thereby triumphed over the corrupt, police state. not shown on the video: the same anarchist having his head smashed with a truncheon. the moral of story: breaking glass is one thing, but it is much worse to break one's head. also: breaking heads is not the same as freeing minds. also: in the contest of man versus tank on tianmen square, the only hope is that there is a human being behind the machine, or else human beings watching for the sake of posterity– therefore, both your victory and your sacrifice hinge on yourself remaining palpably, visibly human, in word and deed.